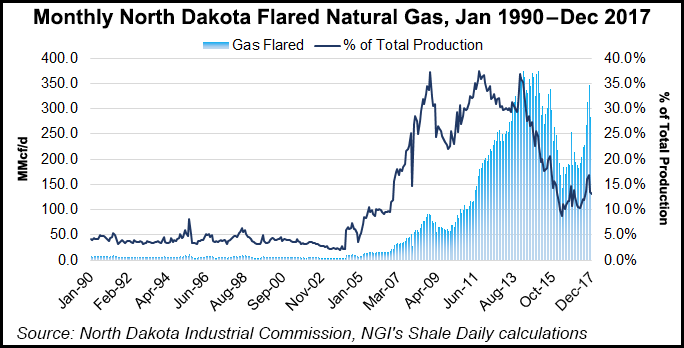 The state continues to see higher production, but gas capture remains stuck at 88%, said Department of Mineral Resources (DMR) director Lynn Helms. He discussed the latest numbers for December, the most recent month for complete statistics, on Thursday during a webinar.

The state is “really struggling with gas capture,” said Helms, who noted the North Dakota Petroleum Council (NDPC) has reactivated an industry task force to deal with the issue. “The task force has met one time already this year, and it will meet numerous times in the next few months, I believe.”

Producer and midstream representatives are trying to determine what they can do to meet the state’s future gas capture goals. “They are looking at the possibility of having a meeting with regulators about the capture requirements,” Helms said.

He equated the latest flaring volume total as comparable to the output of the Tioga Gas Processing plant. “If you were going to aggregate all of that flared production into a pipe, it would be enough to feed a huge gas plant.”

Helms was asked during the webinar about plans announced last month by Hess Midstream Partners LP and Targa Resources Corp. to build the Little Missouri Four, a 200 MMcf/d processing plant in North Dakota.

“It is questionable whether the project will make it possible for the industry to meet the state’s 88% capture goal later this year,” he said. “Clearly it is absolutely necessary to allow the industry in McKenzie County to be able to keep up with 85% gas capture.”

Helms said Targa has spent the past year putting in bigger pipes and looping all of its lines, increasing the size of its gas gathering, so the larger sized pipes that are needed are now in place. Compressors to boost throughput are ordered and should be in place this year. “They’re making progress, but they are very concerned about what’s going to happen in late 2018-2019; they still need rights-of-way for 2019 build-out.”

Beyond this year, the challenge is for the industry to avoid state-imposed production restrictions that will kick in for operators that do not meet the more stringent capture goals.

“The one big impediment at this point is rights-of-way” on Bureau of Land Management-controlled lands, Helms said. The goal this spring, if Interior Secretary Ryan Zinke is able to attend the NDPC’s Williston Basin Petroleum Conference in May “is to have him meet with tribal and state officials to work out some solutions.”

Bakken crude oil prices moved sharply higher in January to $54.75/bbl from November/December prices near $49/bbl. Rig counts climbed to 57 as of Thursday from 56 in January and 52 in December.

Winter weather dampened activity and producing wells in December, which fell to 14,293, down 45 from November’s total of 14,338 producing wells, an all-time high for the state.