The U.S. natural gas rig count went unchanged at 153 for the week ended Friday (July 15), while an uptick in the oil patch helped lift the overall domestic drilling tally four units higher to 756, according to updated numbers from Baker Hughes Co. (BKR). 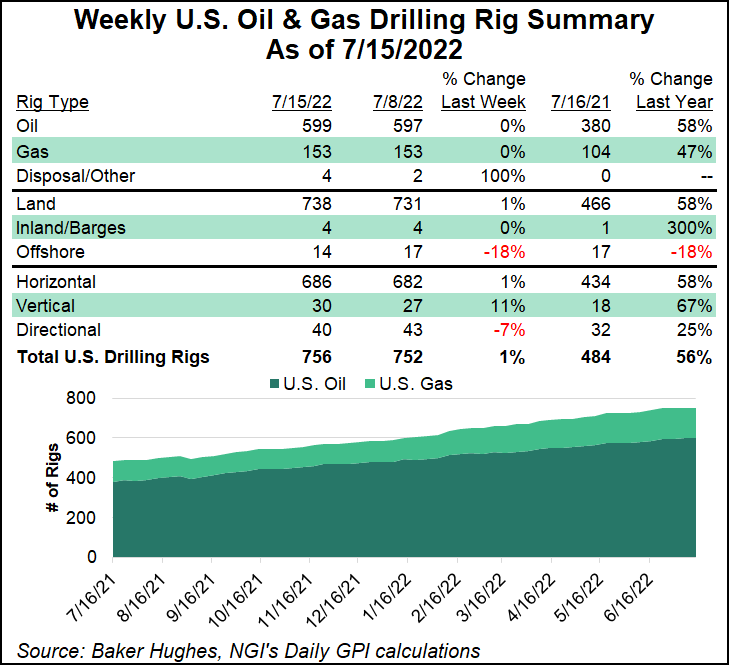 Gains in the United States for the week included two oil-directed rigs and two miscellaneous units. The combined 756 active U.S. rigs as of Friday marks a 272-rig increase from 484 rigs running in the year-earlier period.

The Canadian rig count, meanwhile, rose 16 units to 191 for the week, including gains of nine oil-directed rigs and seven natural gas-directed rigs. The overall Canadian count finished the week 41 units ahead of its year-earlier total of 150.

In terms of changes by major drilling region, the Granite Wash saw a two-rig increase overall for the period, while the Eagle Ford Shale added one rig, according to BKR. The Haynesville Shale, meanwhile, saw a one-rig decline week/week.

Brent crude oil prices are on track to average $104/bbl in 2022, a sharp increase from an average price of $71 for the global benchmark in 2021, according to updated modeling from the Energy Information Administration (EIA).

Questions remain as to the impacts of sanctions on Russia’s oil production. Also sources of uncertainty are the production decisions by OPEC-plus and the rate of U.S. output increases moving forward, according to EIA.