A slowdown in natural gas-directed drilling helped drop the U.S. rig count two units to 967 during the week ended June 21, according to data from Baker Hughes, a GE Company (BHGE). 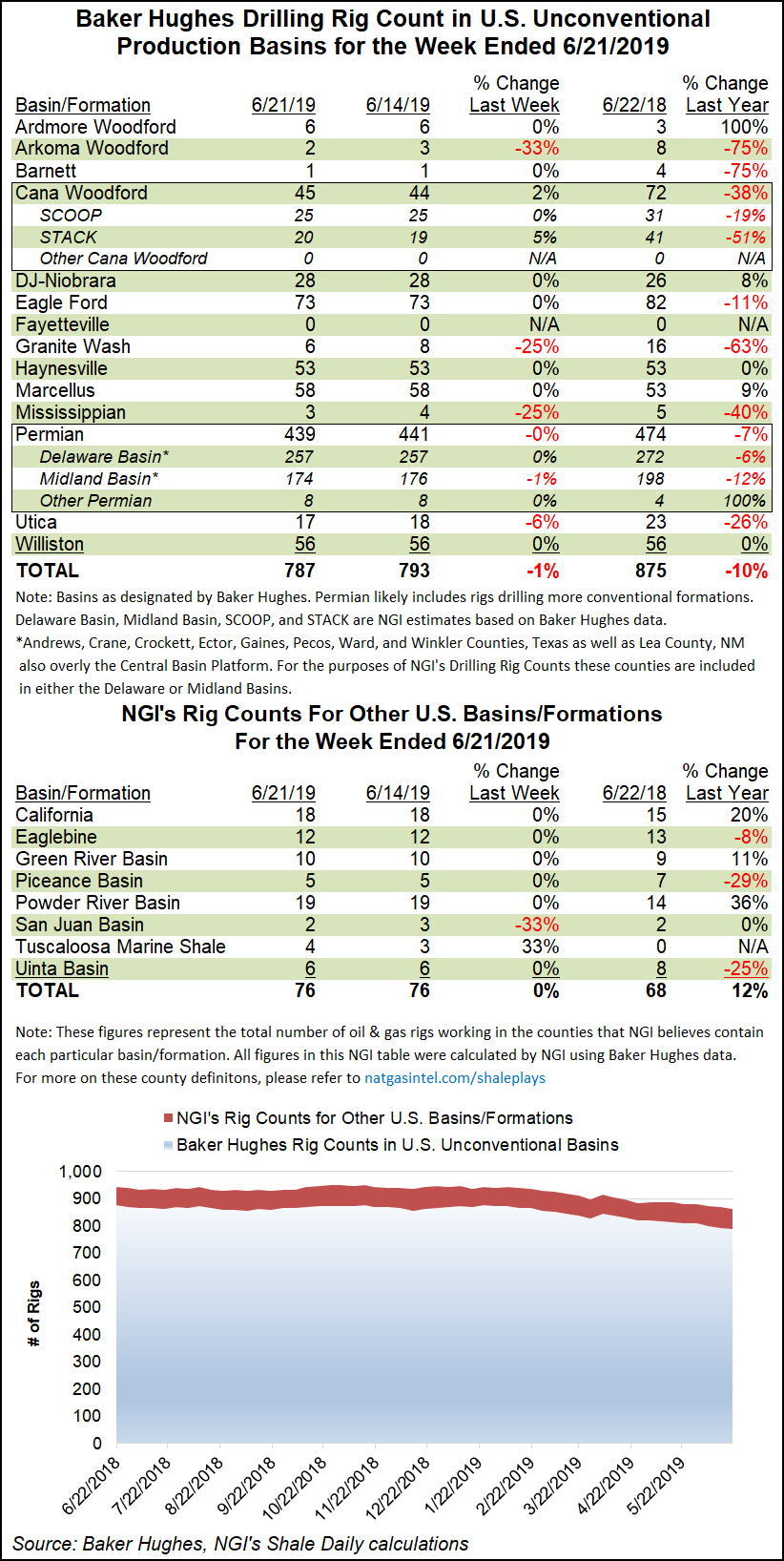 The United States saw four gas rigs pack up shop during the week, offsetting the net gain of one oil-directed rig and one miscellaneous rig. The 967 active rigs for the week put current domestic drilling activity 85 units under the 1,052 rigs running at this time last year.

The week’s declines occurred on land, with Gulf of Mexico activity steady at 24 units, up from 18 a year ago. Directional rigs finished flat week/week, while four vertical units were added, partially offsetting a decline of six horizontal rigs.

Meanwhile, Canada’s rig count grew 12 units for the week, including 11 oil-directed rigs and one gas-directed. The Canadian count finished the week at 119, down from 160 a year ago. The combined North American rig count picked up 10 units to end the week at 1,086, down from 1,212 active rigs in the year-ago period.

Among plays, the Permian Basin and the Granite Wash each posted a net decline of two rigs week/week. The Permian, the most active U.S. onshore play, ended at 439 rigs, off 35 units from its year-ago tally of 474.

The Cana Woodford added one rig for the week, while the Arkoma Woodford, Mississippian Lime and Utica Shale each dropped one rig.

Among states, Texas posted the sharpest decline as four units exited the patch. New Mexico and Oklahoma each dropped one rig week/week, while Alaska saw four rigs join the patch, according to BHGE.

In the Northeast, Pennsylvania dropped two rigs from its tally to fall even with the 37 units active in the state a year ago. The Pennsylvania declines were offset by the return of two rigs in neighboring West Virginia, which grew its tally to 21, up from 17 in the year-ago period.

Canada’s oil industry got some potentially encouraging news during the week when officials in Ottawa granted approval for a second time to the 590,000 b/d Trans Mountain oil pipeline expansion.

The official endorsement arrived studded with conditions crafted by the National Energy Board and Liberal ministers to comply with a verdict last August by the Canadian Federal Court of Appeal that overturned the first cabinet approval. Still, despite the step forward, hurdles remain for advancing the embattled project, which would provide much-needed capacity for Canadian oil producers.