The U.S. natural gas rig count rose four units to 166 during the week ended Friday (Sept. 9), while a slowdown in the oil patch dropped the combined domestic tally one unit overall to 759, according to the latest numbers from Baker Hughes Co. (BKR). 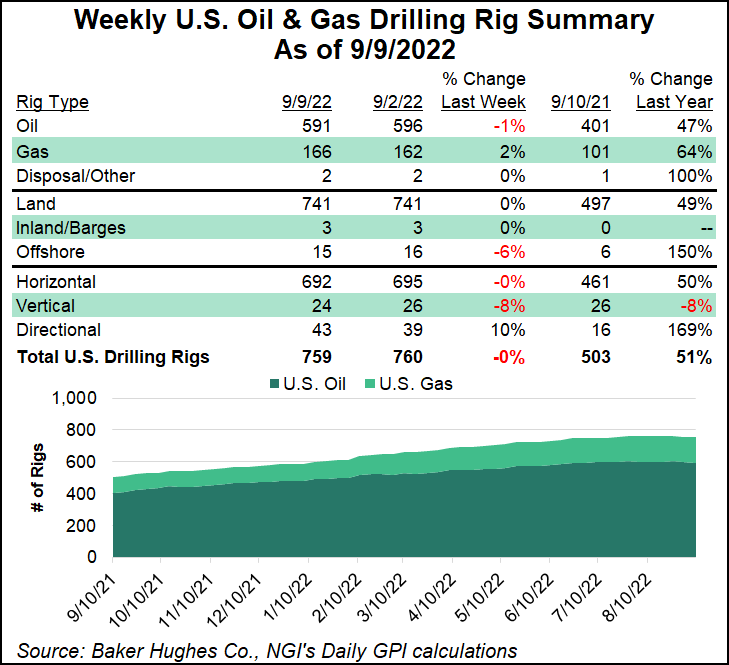 Oil-directed rigs in the United States fell five units to end the week at 591. The 759 active U.S. rigs as of Friday is up from 503 rigs running in the year-earlier period, according to the BKR numbers, which are partly based on data from Enverus.

U.S. land drilling was unchanged overall week/week, while the Gulf of Mexico count eased one unit lower to 13. A four-rig increase in directional drilling was offset by declines of three horizontal rigs and two vertical units, according to the BKR data.

The Canadian rig count dropped three rigs for the period, all oil-directed. The Canadian count ended the week at 205, up from 143 a year ago.

Changes by major drilling region included a two-rig decline in the Permian Basin, which saw its running total fall to 340. That’s up from 254 in the year-ago period. The Mississippian Lime doubled its count week/week, adding one unit to finish the week with two active rigs.

Counting by state, Texas saw a three-rig decline for the period, while Louisiana and Oklahoma each dropped one rig. One-rig gains were recorded in Alaska, Kansas, New Mexico and Utah, the BKR data show.