The U.S. natural gas rig count dropped one unit to 155 for the week ended Friday (Nov. 4), while an uptick in oil drilling nudged the combined domestic tally two units higher to 770, according to updated numbers from Baker Hughes Co. (BKR). 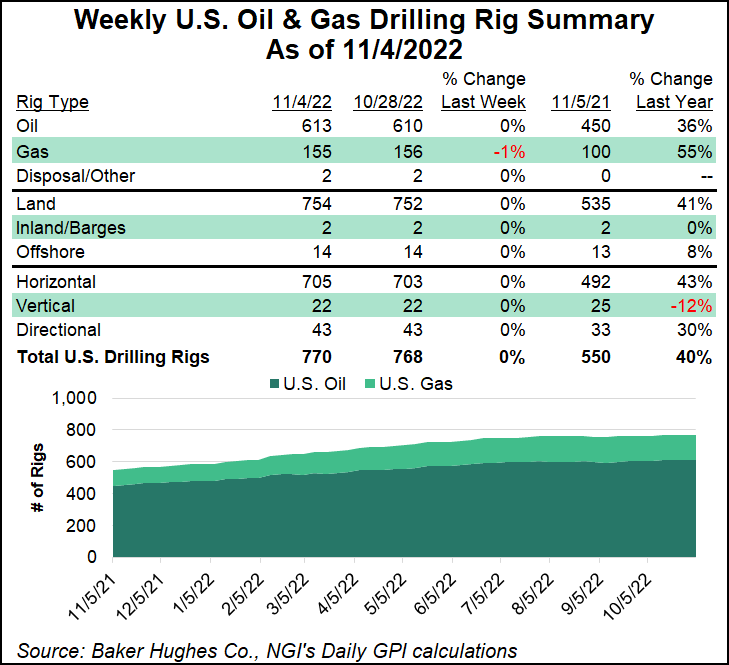 Domestic land drilling increased by two units for the week, while the Gulf of Mexico count was flat at 13. Total horizontal rigs increased by two, while vertical and directional drilling totals were unchanged week/week.

The 770 active U.S. rigs as of Friday compares with 550 rigs running in the year-earlier period, according to the BKR numbers, which are partly based on data from Enverus.

The Canadian rig count fell three units for the period to end at 209, up from 160 in the year-earlier period. Changes there included a decline of four oil-directed rigs, partially offset by a one-rig increase in natural gas-directed drilling.

Looking at changes by drilling region, the Williston added two rigs for the period, raising its total to 41, up from 24 last year. The Ardmore Woodford added a rig, while one rig exited the Haynesville Shale.

Counting by state, North Dakota added two rigs to its total for the week, while Oklahoma, Texas and Wyoming each added one. On the other side of the ledger, California posted a two-rig decline week/week, while Louisiana’s total declined by one, according to the BKR numbers.

Domestic crude production ticked lower in the week-earlier period along with demand, the U.S. Energy Information Administration (EIA) said earlier in the week.

In its latest Weekly Petroleum Status Report on Wednesday, covering the week ended Oct. 28, EIA said output declined 100,000 b/d week/week to 11.9 million b/d. On a year/year basis, however, production was up 5% in October.

Meanwhile, Saudi Arabia-led OPEC and its allies, aka OPEC-plus, plan to cut their collective production by up to 2.0 million b/d this month. The cartel cited near-term global economic headwinds amid lofty inflation in the United States and Europe as well as pandemic-related lockdowns in China.