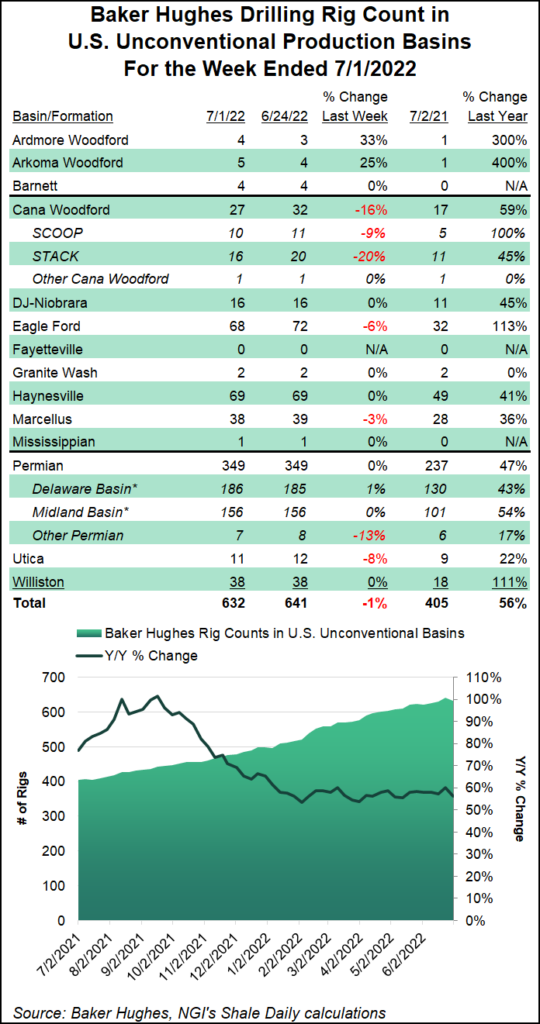 One oil-directed rig was added domestically for the week, while natural gas-directed rigs declined by four. The combined 750 active U.S. rigs as of Friday compares with 475 rigs running in the year-earlier period, according to the BKR numbers, which are partly based on data from Enverus.

Land drilling declined by four units in the United States week/week, while the Gulf of Mexico added one rig to raise its total to 16. Declines of three horizontal rigs and two vertical rigs were partially offset by a two-rig increase in directional drilling, the BKR data show.

In Canada, seven natural gas-directed rigs and five oil-directed rigs were added. That lifted the Canadian rig count 12 units overall to 166 for the week, up from 136 in the year-ago period.

Broken down by major region, the Cana Woodford saw a five-rig decrease week/week, lowering its total to 27, versus 17 a year ago. Four rigs exited in the Eagle Ford Shale, while the Marcellus and Utica shales each posted one-rig declines. On the other side of the ledger, the Ardmore Woodford and Arkoma Woodford each added a rig, according to the BKR data.

Counting by state, Texas dropped two rigs week/week, while Ohio, Pennsylvania and Utah each dropped one. Louisiana and New Mexico each added a rig.

Earlier in the week, OPEC-plus affirmed its intentions to ramp up production in July and August. The cartel is targeting output growth of 648,000 b/d both months.

Should OPEC-plus meet its target, its average crude generation would climb to nearly 44 million b/d by August, on par with pre-pandemic levels.