A major attack on Saudi Arabia’s oil infrastructure over the weekend rocked crude prices, sounding an alarm that markets may have previously discounted the extent of geopolitical risks to supply, according to analysts. 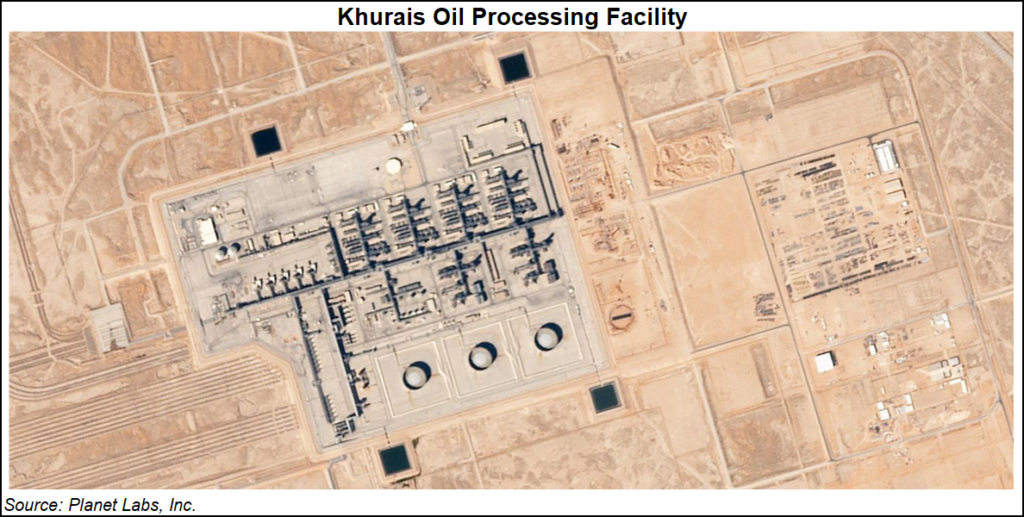 West Texas Intermediate (WTI) futures on the New York Mercantile Exchange were surging early Monday, trading $6 higher to more than $61/bbl at around noon ET. The rally came as markets reacted to what analysts described as the largest-scale oil supply disruption in decades.

“Saudi Aramco’s oil processing and production facilities were attacked over the weekend, leading to the suspension of 5.7 million b/d of production,” BMO Capital Markets analysts wrote late Sunday. “While the duration of the suspension could prove brief, the attack should serve as a reminder that the Middle East remains volatile and that there is limited spare capacity outside of Saudi Arabia to deal with unexpected disruptions in oil production.”

Raymond James & Associates Inc. analysts emphasized the significance of the events in Saudi Arabia, estimating that the attacks took offline around 5% of global supply.

“In recent months, oil prices have traded predominantly on demand-related fears surrounding the U.S.-China trade war, but as this attack illustrates, geopolitics can be much more consequential to the overall oil supply/demand equation than the oil market has been pricing in,” the Raymond James analysts said.

The attacks, occurring at Saudi Arabia’s Abqaiq processing facility and Khurais oilfield, highlight that a sizeable percentage of the globe’s oil output is concentrated in regions that face ongoing conflict, whether with Iran or the Yemeni Houthis, Tudor, Pickering, Holt & Co. (TPH) analysts said. They estimated that Saudi output accounted for around 12% of global supply as of August.

“To put this into context, there is currently around 20% of global liquids flowing through the Strait of Hormuz, which could remain an ongoing source of risk, though Saudi Arabia has accelerated alternative options via the East-West pipeline system,” the TPH analysts said. While production impacted by the attack over the weekend could come back online in the near-term, “the market is likely to price risk premium into the forward curve amid uncertainty around potential escalation of Saudi Arabia/U.S.-Iran conflict.”

A team of Goldman Sachs analysts led by Damien Courvalin said any large rally in deferred prices could provide producers an opportunity to hedge expected production out to 2020 and 2021, a period where they said coverage remains low.

“Higher U.S. shale oil production on the back of a sustained rally in prices would further create downside risk to U.S. gas prices, with higher associated gas production in the face of limited demand growth in the coming years requiring even lower Appalachia and Haynesville gas production,” the Goldman analysts said. “In turn, the disruption could tighten” the global natural gas liquids (NGL) markets, “with a current curtailment in Saudi production of 2 Bcf/d used to produce 700,000 b/d of NGLs.”

A response from Lower 48 producers could take several months, given a typical lag of four months between drilling and production, Goldman analysts said. “This was visible last year, with a rally to $60/bbl WTI prices in late 2017 leading to an acceleration in production growth in the following summer.”

Should WTI prices rally to $65/bbl, it could mean an additional 0.6 million b/d in production from U.S. producers, according to Goldman’s estimates.

“While greater focus by companies on returning cash to shareholders could reduce this sensitivity, the debottlenecking of the Permian Basin with new pipelines should instead allow for a larger production response from lower cost producers than last year, when more marginal plays drove the production increase in the face of Permian bottlenecks,” the Goldman team said.

TPH analysts said even with a premium added to the forward curve, fundamentals for 2020 still “look to be on shaky footing” without “tangible disruptions” or additional sanction pressure on Iran. TPH estimates pointed to roughly 800,000 b/d of oversupply in 2020, which could “overshadow” near-term disruption from the attacks on the Saudi facilities.

Because of that, TPH analysts said investors may like to see operators use Monday’s rally “if the forward curve cooperates, to add to hedge books in 2020 and beyond…especially with those precarious balance sheet positions.”

The attack prompted President Trump to call for expedited “approvals of the oil pipelines currently in the permitting process in Texas and various other states.”

Responding to the president’s remarks, FERC Chairman Neil Chatterjee said the Commission likely wouldn’t be involved in any efforts to speed up approval for oil pipelines given limits on its jurisdiction.

“However, events like these are a reminder of the importance of ensuring our nation’s energy facilities — regardless of whether they are pipelines, refineries, transmission lines or power plants — are safe from physical as well as cyber threats,” Chatterjee said. The Federal Energy Regulatory Commission “is actively working with our federal, state and industry colleagues to ensure we’re doing all we can within our jurisdiction on the electricity side.”