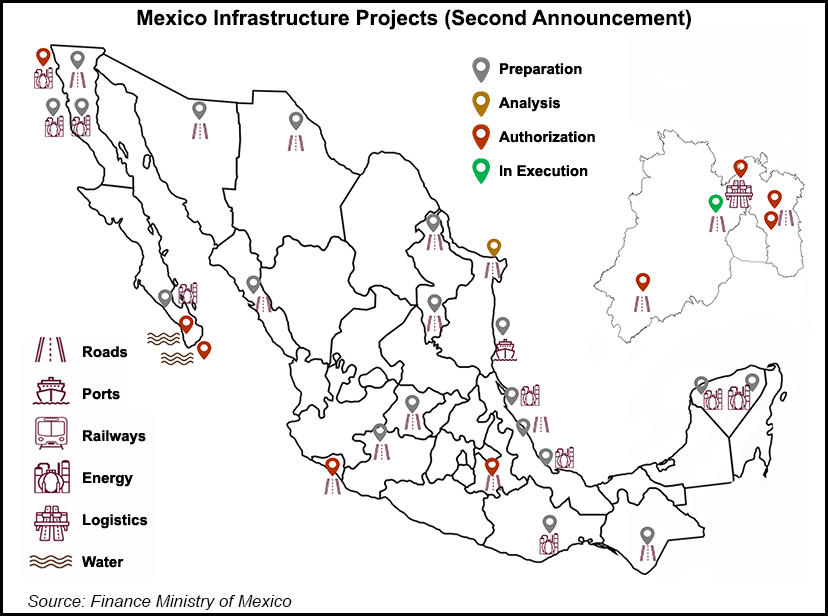 “It’s very important that the public and private sectors and civil society are coming together to push economic growth in our country, creating jobs and wellbeing,” President Andrés Manuel López Obrador said. “This will help us get out of the economic crisis soon.”

Mexico should return to pre-pandemic economic levels in the first quarter of 2021, the president said.

There were nine energy projects worth 116 billion pesos, or $5.8 billion, in Monday’s announcement, all focused around natural gas.

The plants are to be developed by Mexican state utility Comision Federal de Electricidad (CFE), which holds the majority of natural gas capacity in the country. Works are planned to begin in August, according to a Finance Ministry presentation.

The plan also includes a natural gas pipeline crossing the Mexican isthmus to be developed by CFE and Corredor Interoceánico del Istmo de Tehuantepec (CIIT) worth 9 billion pesos ($450 million) with construction slated to start next July. The natural gas processing station Tecolutla Lerdo was also included in the package.

The project would source U.S. gas, and it is expected to have an advantage over the U.S. Gulf Coast LNG facilities because vessels do not have to traverse the Panama Canal.

ECA includes a $400 million pipeline in Mexico. The plant would be built adjacent to the company’s existing ECA LNG receipt terminal near Ensenada.

During the official launch of the program, Finance Minister Arturo Herrera and the head of business chamber Consejo Coordinador Empresarial (CCE), Carlos Salazar, singled out the importance of the ECA project because of the size of the investment.

“The energy sector, which we’ve talked so much about, now has substantial projects planned,” Salazar said. ECA is “enormous,” and a third packet of projects is being finalized.

Mexico imports most of its gas from the United States, which means most of the projects listed would require imports for their needs.

Of the 39 announced projects announced in the first packet in October, 10 are already underway, according to Mexican officials.