New natural gas builds are central in the electricity plans of Mexico’s government as it seeks to enhance the role of state utility Comisión Federal de Electricidad (CFE) in power production and dispatch. 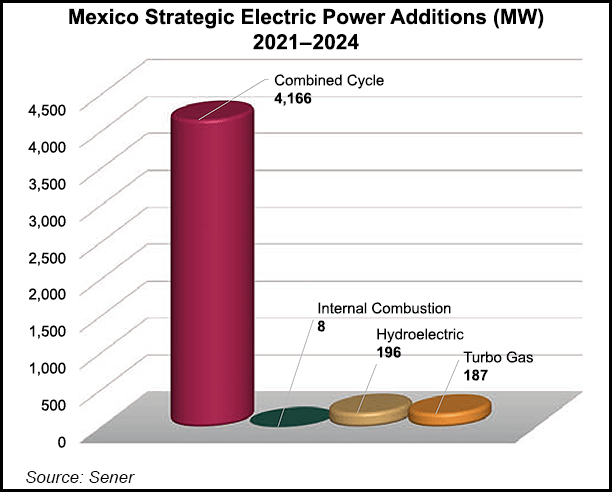 According to the country’s recently released 2020-2034 Prodesen power sector development plan, “the development of electric power capacity between 2020 and 2034 will continue being based predominantly around the use of natural gas, with the gradual incorporation” of renewable energies.

Although energy minister Sener is required to update the document every year, the report was the first power sector plan to be released in more than 18 months. The report is available in Spanish.

Beginning this year through 2024, an estimated 4,166 MW of natural gas-fired, combined-cycle capacity is set to be added to Mexico’s grid.

The projects would be developed by CFE and completed during the six-year government of Andrés Manuel López Obrador, which ends in December 2024.

Late last year the Mexican Finance Ministry said the projects were worth a total of 59 billion pesos or around $3 billion in investment.

CFE holds the majority of gas capacity in the country, and most of the gas used in Mexico is imported from the United States.

In 2025-2031, 9,157 MW of “annual flexible natural gas power plants considered as strategic infrastructure projects necessary to comply with national energy policy are being studied.” That would provide the power system “the ability to adjust and adapt to multiple load generation conditions to ensure sufficiency and dispatch safety.”

In the 2019-2033 Prodesen, Sener said Mexico would add over that period an estimated 29,294 MW of combined-cycle gas generation capacity.

In 2018, natural gas provided 47% of electric power to the grid. Power demand is forecast to rise at an annual rate of 3.1% through 2034, above expected economic growth of 2.7%, according to the report.

Sener analysts said power demand figures could be revised downward depending on the duration of the coronavirus pandemic.

Hydrogen was also singled out for the first time in the Proseden report as an energy source of the future. Analysts said hydrogen could one day be used as a replacement fuel for natural gas.

BP plc CEO Bernard Looney said during an earnings call Tuesday that hydrogen “is definitely a gas fuel of the future, there’s no question about that,” but likely wouldn’t become material before 2030.

The Prodesen plan was released almost simultaneously with a bill put forward Monday by President López Obrador to overhaul the Mexican electricity sector.

Among other changes, the bill proposes that CFE obtain priority dispatch over private sector operators in the electric power segment. The bill also proposes analysis of and changes to contracts awarded to independent energy producers that sell power to the CFE.

Analysts at political risk group Eurasia Group said the changes “would completely alter the incentives and relegate private players, hurting the economics of the investments in the sector. The government had already tried to do this last year through a decree, but this was stopped by legal challenges as it went against the antitrust regulations. This may still be an issue if the current bill is approved as is.”