Natural gas customers for one of the largest U.S. utilities are set to see bills increase by as much as $71/month this winter as a result of ballooning natural gas prices. 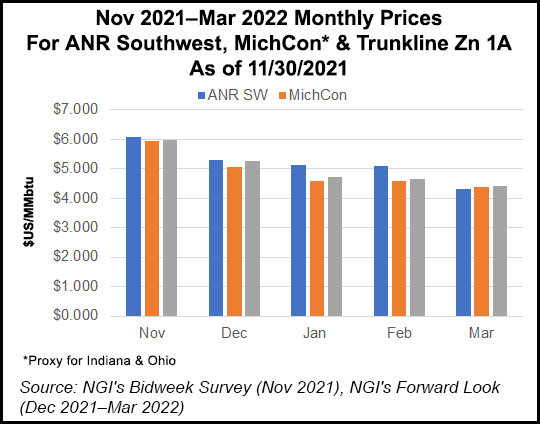 In Arkansas, where CenterPoint serves about 400,000 residential and business customers, natural gas bills could average $131/month from November-March, up from about $92/month last winter. The actual impact to heating bills would vary by customer, but CenterPoint said the hike is necessary to pay for higher fuel prices.

“We encourage our customers to prepare now for the winter heating season ahead,” said CenterPoint’s Cindy Westcott, vice president (VP) for Arkansas and Oklahoma. “It’s also important to remember that, even with higher natural gas prices this winter heating season, bills should still remain lower than customers experienced in the late 2000s when natural gas prices were at record levels nationwide.”

Natural gas prices have risen to levels not seen in more than a decade amid robust demand from exports and power generation and languishing production. New York Mercantile Exchange Henry Hub futures prices surged to $6.202/MMBtu as the November contract expired. With production now approaching all-time highs, prompt-month futures have pulled back given continued mild weather, but they remain at risk of another rally as winter weather looms.

The company’s Ohio subsidiary also cautioned that customers may see a “significant” increase in their natural gas bills this winter, but it did not specify an amount. For the period from November 2020 to March, the average Ohio customer paid $81/month. Meanwhile, the company’s 100,000 Oklahoma customers could see heating bills rise to about $95/month this winter, from about $71/month last year.

“It’s important to remember CenterPoint Energy is not a natural gas supplier,” Leger said. “The customer’s natural gas supplier and corresponding price per unit of gas also influence bill amounts. Some customers prefer a fixed price that won’t fluctuate over the winter, while others prefer to stay on a variable rate, which changes according to the natural gas market.”

Higher Monthly Bills Across The Country

Natural gas providers across the country are hiking their rates in response to higher prices.

In November, Maine’s PUC said some residents could see a nearly 90% jump in their monthly rates starting in January. More than half of Maine’s electric generation comes from natural gas.

Meanwhile, Pennsylvania-based UGI Utilities Inc. said its more than 670,000 customers would see their heating bills rise by 9.6% starting Wednesday (Dec. 1), to $98.31/month from $89.69/month. “Energy prices in general have seen upward price pressure throughout 2021, and natural gas is no exception,” said VP Chris Brown of Rates and Supply.

The Energy Information Administration (EIA) expects U.S. households to spend 30% more for gas heating on average this winter. In the Winter Fuels Outlook, the agency said in addition to higher fuel costs, it is accounting for a 3% increase in U.S. heating degree days this winter compared with last winter, based on forecasts from the National Oceanic and Atmospheric Administration.

A scenario in which temperatures are 10% colder “significantly increases forecast expenditures,” while 10% warmer-than-expected temperatures still would see households paying more because of price increases, researchers said. Nearly half of all U.S. households heat primarily with natural gas, according to EIA.

“Even with a lag, increases in spot commodity prices over the past year are pushing up retail prices this winter,” the agency said. “Henry Hub natural gas spot prices were $5.61/MMBtu on Oct. 1, which is up 84% from last winter’s average. This price increase contributes to our forecast that residential natural gas prices this winter will be 27% higher than last winter and that residential electricity prices will be 5% higher than last winter.”

Rate Relief In the Works?

CenterPoint is working with PUCs in some states to limit the impact of rate increases on customers. For example, in Minnesota, the utility has pitched a rate stabilization plan that would lower a proposed rate increase to 3.9%, or $39.7 million per year – with a monthly bill impact of about $2.83 for a typical residential customer. The initial rate increase of about 6.5% would add about $4.05 to a monthly bill.

“Although we believe our full rate request is warranted, we’re offering a scaled-down plan in recognition of the burdens experienced by many of our customers due to the Covid-19 pandemic and inflation, including higher energy prices,” said CenterPoint VP Christe Singleton of Minnesota Gas.

The revised plan also would extend the cost recovery period and reduce the monthly surcharge for the February gas price spike that occurred during Winter Storm Uri. CenterPoint Energy has asked the PUC to approve the rate stabilization plan by the end of this year, allowing new rates to take effect on Jan. 1. The PUC is set to meet Dec. 1 and 2.

In Texas, where estimates suggest the price spike that occurred during Uri resulted in about $1.14 billion in unexpected costs for gas customers, utilities reached a settlement that similarly would see cost recovery over a longer period. CenterPoint, along with other Texas utilities, had sought to recover storm-related costs via Customer Rate Relief (CRR) bonds approved by the Railroad Commission of Texas (RRC).

“This ultimately means that the costs will be spread out over a number of years instead of just one,” a CenterPoint spokesperson told NGI.

Bills are expected to begin reflecting the costs in 2022, with the estimated monthly customer rate relief charge expected to be $2.50-5.00/month. Had the cost recovery taken place via the traditional mechanism of the monthly Purchased Gas Adjustment, charges could have been as much as $40/month for one year, according to CenterPoint.

The higher heating costs this winter have attracted the attention of the federal government. The Biden administration is aiming to use a portion of the $1.9 trillion American Jobs Plan that passed this spring to distribute more aid. The package provided an additional $4.5 billion for the government’s Low Income Home Energy Assistance Program, which typically provides $3-4 billion annually. Aid for renters also can cover utility costs, while money provided to state, local and tribal governments can help families that face high heating bills and are ineligible for other programs.

A meeting between the White House and state representatives was to take place to discuss ways to distribute the funds and coordinate programs. The administration also has called on utilities and energy companies to use the available government resources to protect their most vulnerable customers.