Energy accounted for $25 billion, or about 8% of the value of all U.S. exports to Canada in 2018, led in large part by crude oil and natural gas, according to data compiled by the Energy Information Administration (EIA). 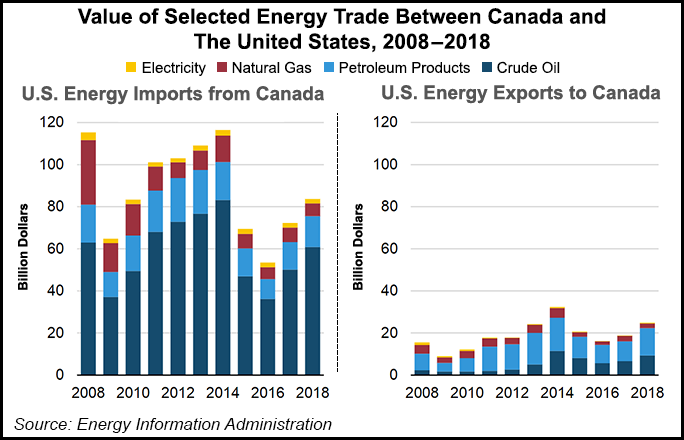 U.S. energy exports to Canada reached their highest value since 2014, EIA said in a note on Tuesday, citing data from the latest annual Standard International Trade Classification from the U.S. Census Bureau. Canada is the largest energy trading partner with the United States, and energy imports from the country consistently outpace U.S. energy exports. However, Canada is still the second-largest importer of energy from the United States behind Mexico.

U.S. natural gas exports to Canada in 2018 averaged 2.3 Bcf/d and were valued at more than $2 billion, EIA said. Shipments mainly went to the eastern provinces. U.S. gas exports, the agency added, totaled 3.3 Bcf/d in February, the highest level on record. Natural gas imports from Canada, meanwhile, fell to 7.8 Bcf/d last year and were valued at $6 billion.