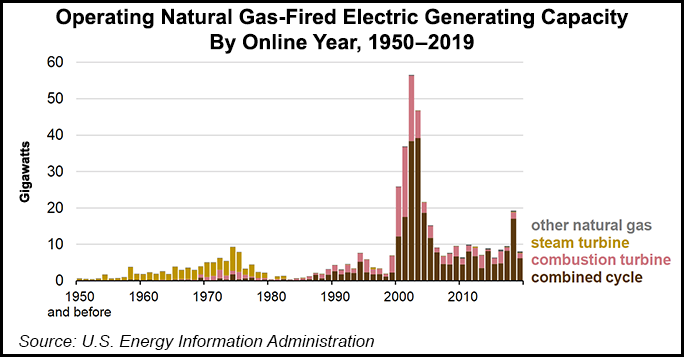 Over the past four decades, the agency said, combined-cycle plants have gradually replaced aging steam turbines, which are relatively inefficient. The trend is expected to continue and further drive demand for natural gas.

Combined-cycle generators are designed to efficiently operate for extended periods, while combustion and steam turbines are now usually used only to meet peak demand loads.

With the exceptions of Vermont and Hawaii, all states have at least one utility-scale natural gas electric power plant. Texas, Florida, and California, which lead the nation for the most electricity consumption, each have more than 35 GW of gas-fired capacity, EIA said.

In these and many states, most capacity is combined-cycle technology. However, one heavily populated state in particular, Illinois, has plenty of room to catch up, EIA said, as 67% of the gas capacity is made up of combustion turbines.