North American natural gas buyers are ready to embrace low-carbon options for their customers, but executives said they are wary about the dearth of regulatory mandates, which could determine which direction to take. 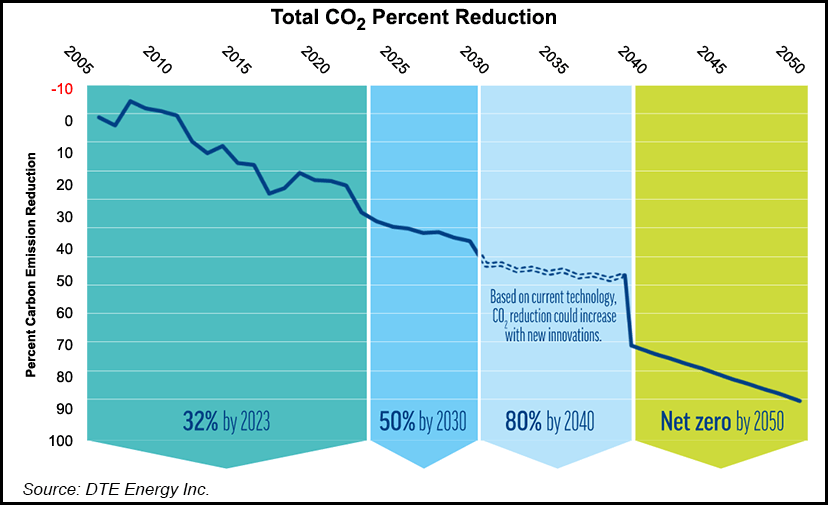 Many natural gas operators have set net-zero emissions targets, with 2050 as the goal year, including DTE Energy. The decision by the Detroit-based company to become carbon neutral, however, is only “the first phase,” Schiffer told the audience.

Beyond that, “we’re not exactly sure” which direction to take. “So the next process is answering key questions…” along with working with Michigan regulators.

Navigating a gas market that includes low-carbon options has proved a bit tricky. California has implemented low carbon fuel standards (LCFS), but most states don’t yet have mandates to help utilities set a clear direction to recover costs. The California mandates have helped to propel a substantial renewable natural gas (RNG) business.

Without an LCFS in other states, the onus is on companies to create potentially expensive programs without a regulatory backbone.

There’s no doubt the low-carbon initiatives are necessary, Schiffer said. However, they are not so easy to accomplish.

“From a ratepayer perspective,” DTE is facing a “chicken-and-egg situation.” Should the utility wait before creating a program or move forward and see if it passes regulatory muster?

“How far can we go without regulatory approval?,” he asked.

DTE files its gas cost recovery (GCR) plan every December, with a regulatory order issued around 15 months later. It then takes a year or more to know what the GCR is.

“We’re working with regulators to figure out how to get where we are today to where we want to be,” Schiffer said. “We are doing things, but it’s not as simple as we’d like it to be.”

Enbridge’s Nicole Brunner, a manager of gas supply for the Calgary-based conglomerate, agreed. The company also has set a net-zero emissions goal by 2050, with a 35% reduction in emissions by 2030.

Enbridge is incorporating more RNG into the system, expanding responsibly sourced gas certification and adding more carbon capture and offsets. With so many routes available to reach that carbon-free destination, though, Brunner shares Schiffer’s concerns.

‘We may not know how to get there, but we recognize the pace at which this transition is going to happen,” she told the audience. Much has to be in place before companies “can achieve all these great goals.”

“The trouble for the market is that…we don’t know what kind of products to offer,” said Southern Company’s Kenneth Yagelski, director of gas supply. “Right now, everything is voluntary. Very few utilities are operating under legislative or regulatory mandates.”

Once there’s a regulatory framework in place for low-carbon offerings, opportunities “will follow suit,” he told the audience. “But we don’t want them imposed without us having a say. It does become difficult because there’s not a lot of guidance on what direction this is going.”

The rules to reduce emissions also are complicated as one state may go in one direction while another goes the other way. For Yagelski, that could lead to a dilemma as the rules “need to be applied evenly across all natural gas customers so that the mandates don’t create winners and losers.”

RNG, for example, is “certainly an aspirational goal to include in the portfolio,” he said. There’s a reason California’s RNG market is thriving. It’s the state’s LCFS.

“That’s who you are competing against,” the Southern Company executive said. “Otherwise, it’s difficult in the United States” to expand into the RNG business at a competitive price.

“I simply can’t mitigate the risk of price recovery over the premium for RNG,” he said. Most states require gas costs “to be reasonable and prudent…There is no environmental component.”

While RNG might be a “great” opportunity, “I would point back to the law that the gas price has to be reasonable and prudent.”

Instead, the utility is mitigating emissions through other means, including commercial arrangements. Some contracts have “carbon offset aspects, and there are some creative ways to make that work,” Yagelski said.

“Until there’s some change to regulations or the legislation that utilities operate under, a lot of RNG will continue heading West. I don’t see that changing.”

PBF’s senior director Alan King procures natural gas for the company’s U.S. oil refineries and associated crude oil terminals. He told the audience that PBF has yet to set net-zero emissions goals, but it could be “one board meeting away.”

In the meantime, PBF is working on renewable-related endeavors to cut its emissions. An idled hydrocracker unit at its Chalmette, LA, refinery near New Orleans is on the drawing table for a possible conversion into a renewable diesel production complex. Chalmette, a  dual-train coking refinery with 185,000 b/d of total capacity, processes crude oil and produces gasoline, distillates and specialty chemicals. PBF also operates two refineries in California, and one refinery each in Delaware, New Jersey and Ohio.