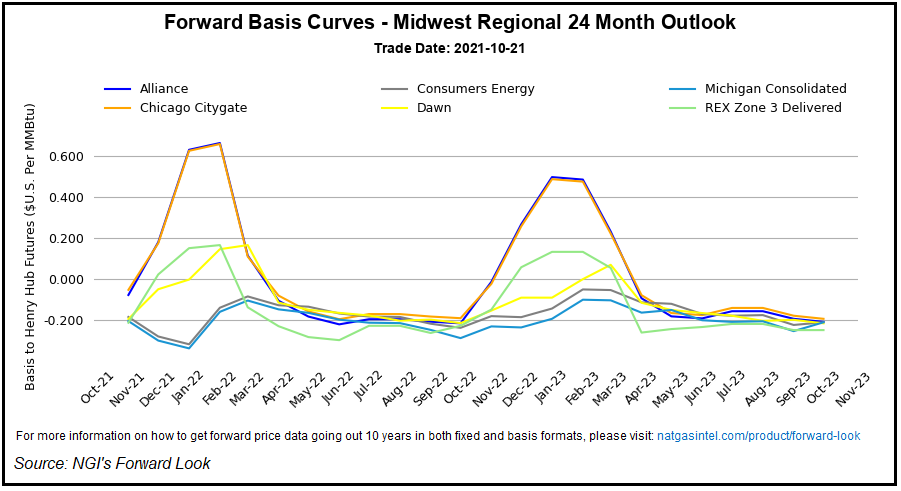 NatGasWeather noted that benign autumn conditions were likely to persist through the end of the month – aside from regional storms — minimizing weather-driven demand overall. Forecasts on Friday, however, tilted colder for early November in the Midwest and Northeast, giving traders reason to believe that heating needs in those key regions could begin to mount and drive stronger demand.

“While the coming pattern is still bearish, it’s not quite as bearish as the data showed to open the week,” NatGasWeather said. “The pattern would be more impressive if not for comfortable conditions continuing over most of the southern two-thirds of the U.S.” through the first week of November.

Cash prices struggled to maintain momentum because forecast total degree days for the next two weeks were “a hefty 25 below normal” in both the domestic and European weather models, the firm added. That was still a few degrees better than forecasts earlier in the trading week, and any notable shift colder could push conditions close to historic averages, explaining optimism in the futures markets Friday.

“We need to be careful here since it wouldn’t take much for colder air over Canada to slide into the northern U.S. for further colder trends for the first week of November,” NatGasWeather said. In “our view, the current risk is the weather data adds a little demand for the start of November.”

“We continue to see models step up the level of blocking in the high latitudes into early November, which, while not making things all that cold right here and now, increases the risk that some colder than normal air finally gets involved down the road,” Bespoke said. “Thus, the changes seen are potentially more bullish.”

With the 15-day outlook now stretching into the start of the heating season, “it is going to be the weather forecast that carries the most weight from here,” the firm added.

EBW Analytics Group noted that liquefied natural gas (LNG) volumes through the latest trading week were off from 2021 highs and below 11 Bcf. However, looming winter demand is expected to drive LNG exports back above that threshold, adding support for prices. The firm also noted that futures this year have tended to rally into prompt month expiration.

The U.S. Energy Information Administration (EIA) on Thursday reported a 92 Bcf injection into Lower 48 gas stocks for the week ending Oct. 15. While stocks remained below the five-year average of 3,612 Bcf, the build lifted stocks to 3,461 Bcf and provided further assurance about adequate supplies for winter.

Tudor, Pickering, Holt & Co.’s (TPH) preliminary modeling suggested another above-average build for the next EIA report. It projected an increase of 92 Bcf versus the five-year average of 62 Bcf.

If that bears out, it would shrink the current deficit to the five-year average to around 3% from 4%. Balances for next week’s report will be influenced by “modestly looser demand” week/week and increased supply from rising exports out of Western Canada, the TPH analysts said.

In the Midwest and large swaths of the East, where cool weather either settled in on Friday or was expected to by the weekend, prices advanced.

NatGasWeather said demand Friday was supported by chilly air and scattered showers across the Midwest and Great Lakes regions. That system was expected to track across the Northeast over the weekend with lows of 30s and 40s.

The West, meanwhile, enjoyed comfortable highs in the 60s to 80s Friday. However, the region’s weather  “will be active through” the coming week “as a barrage of weather systems bring heavy rain and mountain snows with highs of 40-60s,” NatGasWeather said.

The storms “will track across the northern third of the United States with highs of 40s-60s over the course of the week, the firm added. However, most of the southern two-thirds of the country is expected to enjoy mild weather that is unlikely to galvanize either heating or cooling demand.

“National demand will fall to very light levels” as a result, NatGasWeather said.