Natural gas futures were able to work higher Thursday morning even after the Energy Information Administration (EIA) reported a storage injection that was somewhat greater than what the market was expecting. 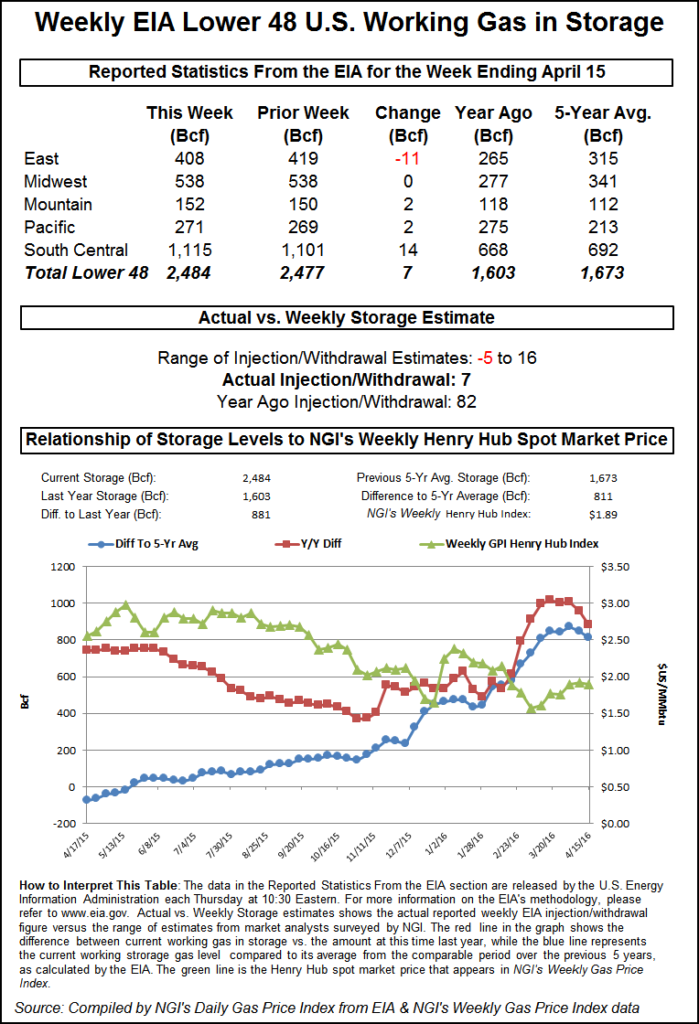 “We were hearing a 6 Bcf build, so it came out about where it was expected,” a New York floor trader said. “It was nothing that wasn’t expected. I think the rise is short-covering. It’s not a strong rally, and we hit stops above $2.08. Some traders are just taking money off the table. I don’t think that people are thinking that they need to cover shorts yet. There is no fear factor [on the part of the shorts].”

Other estimates of the report were somewhat lower. A Reuters survey of 21 traders and analysts revealed an average 4 Bcf build, thus making the report somewhat bearish. If the assumption is made of a bearish report and the market is still able to post gains, that is often construed as a sign of underlying market strength.

“The build of 7 Bcf was modestly more than the consensus expectation and therefore a bearish influence on market sentiment, although the figure was still supportive on a seasonally adjusted basis compare with the 46 Bcf five-year average gain,” said Tim Evans of Citi Futures Perspective.

“The larger than expected build does imply a somewhat weaker supply-demand balance, however, which may carry over into the reports to follow.”

Inventories now stand at 2,484 Bcf and are a robust 881 Bcf greater than last year and 811 Bcf more than the five-year average. In the East Region 11 Bcf was withdrawn, and the Midwest Region saw inventories unchanged. Stocks in the Mountain Region rose 2 Bcf, and the Pacific Region was higher by 2 Bcf as well. The South Central Region added 14 Bcf.

Salt cavern storage was higher by 8 Bcf to 342 Bcf, while the non-salt cavern figure rose 7 Bcf to 774 Bcf.