Forecasts failed to offer enough cold to impress the natural gas futures market Wednesday, with prices continuing to trend in the polar opposite direction of last week’s weather-driven gains. Spot prices were mixed, with gains in the Midwest countering declines further east as traders braced for another round of cold temperatures set to arrive in the Lower 48 this week; the NGI Spot Gas National Avg. finished 3.5 cents higher at $3.140/MMBtu. 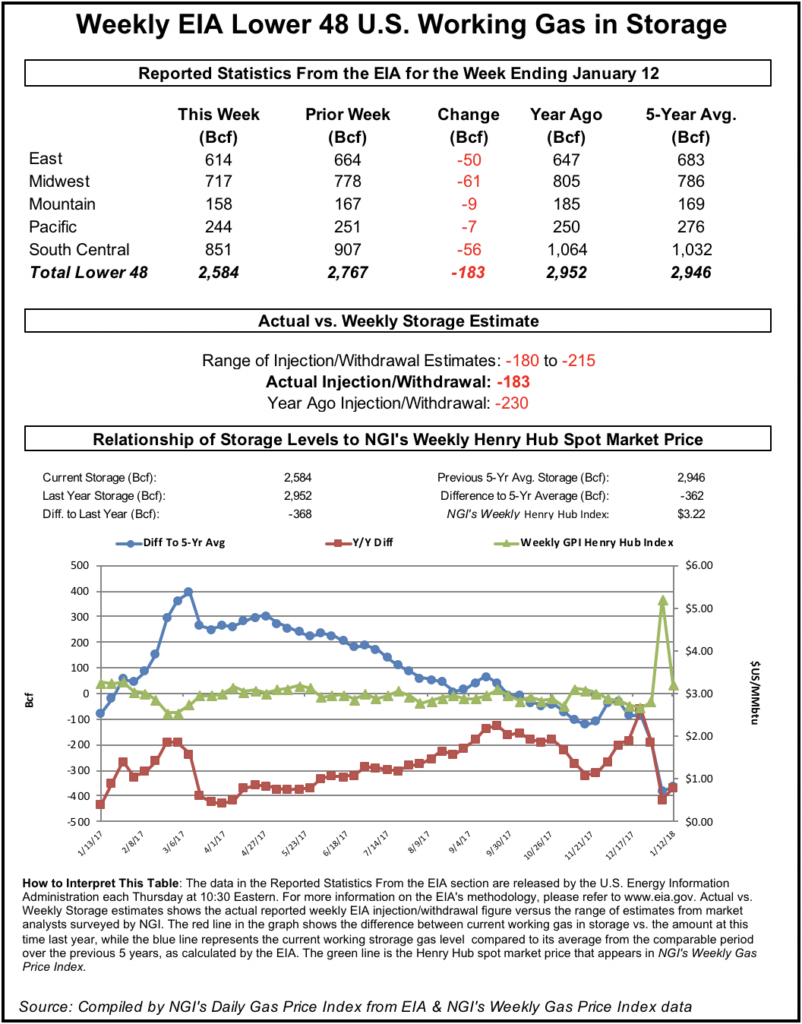 Futures were trading about 10.0 cents higher shortly before 9 a.m. ET Wednesday as overnight guidance suggested late January cold could extend further into February. But by lunchtime on the East Coast those day/day gains had evaporated.

From a technical standpoint, the front month settled below a major support level at $3.000, Rafferty Commodities Group’s Steve Blair, vice president, told NGI. The next stop for prices could be down at $2.864, where the firm has drawn a trend line in the daily continuation chart going back to the summer.

This week has been a “huge about-face from what we saw before the weekend,” when forecasts advertising polar air pushing down into the Lower 48 helped prices settle near $3.500, Blair said. “I’m not surprised that the market gave it all back. This market has been completely and totally driven by whatever the most current forecast is.”

“Overall, a solidly bullish pattern through Feb. 2-3, then becoming neutral to bearish,” the forecaster said. “Clearly, the natural gas markets are weighing the back end of the 15-day forecast far more heavily with prices selling off from much higher overnight levels.”

Markets appear “comfortable” with the potential impacts of strong cold expected this week and next and have focused instead on the milder break expected early next month, according to the forecaster.

“How long the weather data shows this milder break lasting is now of considerable interest,” with longer range models as of Wednesday suggesting it might not last more than five to seven days, NatGasWeather said.

Meanwhile, estimates ahead of Thursday’s Energy Information Administration (EIA) storage report — covering the week ended Jan. 18 — were wide-ranging but generally pointed to another in a stretch of below-average, deficit-shrinking withdrawals.

A pull in the 155-165 Bcf range would easily top the less-than-impressive 81 Bcf withdrawal EIA reported last week for the period ended Jan. 11. But it would fall short of the five-year average 185 Bcf pull and come in well below the 273 Bcf withdrawal EIA recorded in the year-ago period.

The United States entered the 2018/19 heating season with historically lean stockpiles, but the once-massive year-on-year and year-on-five-year-average inventory deficits have been shrinking rapidly since December as colder weather has generally failed to materialize. An on-target withdrawal Thursday would shift the year-on-year comparison from a deficit to a surplus.

With mild temperatures to start 2019 going up against the intense cold observed one year ago, markets have taken notice of the fact that “we’ve narrowed that storage deficit in a very quick way,” Rafferty’s Blair said. Considering the supply growth over the past year or so, if the year-on-year storage deficit swings to a surplus, “that’ll certainly help to, I wouldn’t say put a lid on prices, but it will help the bearish side of the market.”

In the nearer-term, NatGasWeather was calling for a brief mild break across the eastern United States to keep national demand at near-normal levels Wednesday and Thursday. But the next wave of frigid temperatures in a series of cold weather events to close out the month was expected to push into the Plains and Midwest Wednesday and Thursday before moving into the northern and eastern United States by this weekend, according to the forecaster.

Lows with this system could range from negative 10 degrees up into the 20s, NatGasWeather said.

In the aftermath of the explosion reported in Ohio Monday on the Texas Eastern Transmission Co. (Tetco) system, north-to-south capacity through the Berne, OH, compressor on the 30-inch diameter line was further reduced by 532 MMcf/d for Tuesday’s gas day to 220 MMcf/d, according to Genscape Inc. analyst Josh Garcia. Flows were scheduled to drop to zero starting Wednesday.

“As result, there is just 1 MMcf/d of reported flows through Berne,” Garcia said. “This results in a 1.4 Bcf/d drop in flows since Monday (Jan. 21) and a 2.2 Bcf/d reduction in flows compared to the 30-day max. Capacity at downstream compressors on the 30-inch line remained at 700 MMcf/d, but this is irrelevant” given the lack of flows through Berne.

Meanwhile, the McMahon Plant in northern British Columbia returned to service over the weekend to restore more than 300 MMcf/d of production in the region, according to Genscape.

“The McMahon Plant had been down for repairs since Jan. 2, cutting about 500 MMcf/d of production receipts,” Genscape analyst Joe Bernardi said. “Repairs were initially expected to be complete by Jan. 13, but this schedule was amended and the plant actually returned to service on Sunday (Jan. 20).”

Volumes in the first few days following the plant’s return to service totaled around 300-350 MMcf/d, down from roughly 540 MMcf/d averaged in December, according to Bernardi.

A force majeure declared late last week on the Mojave Pipeline system at Topock near the Arizona/California border has been restricting about 70 MMcf/d of imports into the Golden State, Genscape said.

The event, caused by equipment failure at the Topock Compressor Station, restricted flows over the holiday weekend to around 342 MMcf/d, down from an average 413 MMcf/d over the prior 30 days, according to analyst Matthew McDowell.