University of Michigan (U-M) researchers on Thursday issued seven technical reports that together form what they said is the most comprehensive state-focused resource on drilling, and in particular, unconventional drilling using hydraulic fracturing (fracking). 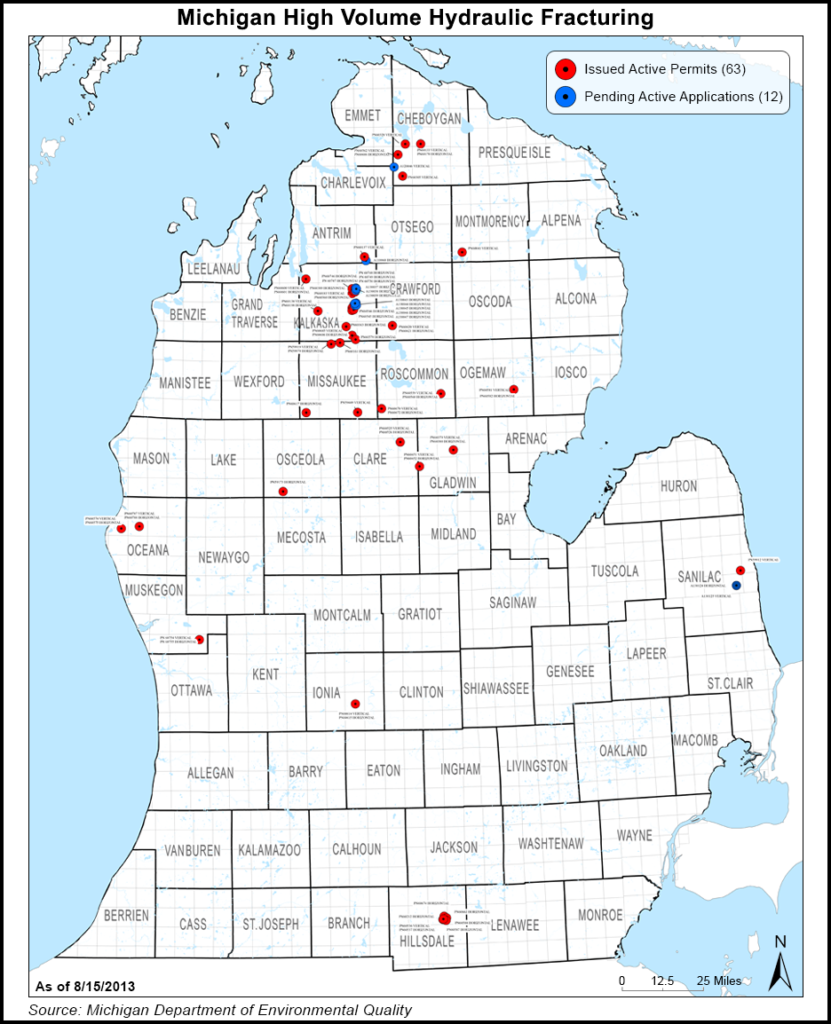 The reports, a combined 200 pages, examine seven critical topics related to using unconventional drilling in Michigan, with an emphasis on high-volume fracking methods: technology, economics, public perceptions, public health, geology and hydrogeology; environment and ecology; and policy and law. The project reports are the first phase of a two-year assessment to lay a foundation for analyzing unconventional drilling policy options. The assessment is set for completion next spring.

“There’s a lot of interest in high-volume hydraulic fracturing, but there really isn’t much activity at the moment in Michigan,” said project director John Callewaert, who is in charge of integrated assessment at U-M’s Graham Sustainability Institute. “That’s why now is a good time to do this assessment.”

Prospective natural gas resources in the state include the Antrim Shale and a portion of the Utica Shale, which extends into the state’s Collingwood formation, a shale/limestone chalk on the Lower Peninsula. The formation has attracted Encana Corp., Chesapeake Energy Corp. and Chevron Corp., among others (seeDaily GPI, Nov. 10, 2010; May 20, 2010).

The potential to extract the gas resources through fracking, and with it jobs and economic growth — as well as the possible impacts to the environment and public health — have to be addressed, researchers said.

“Nothing like this has been done before in Michigan,” Callewaert said. “Having this comprehensive, state-specific set of reports will be an invaluable resource that will help guide future decisionmaking on this issue — and hopefully will help Michigan avoid some of the pitfalls encountered in other states.”

In view of current low natural gas prices, the high cost of drilling deep shale formations and the absence of new oil discoveries means “it is unlikely that there will be significant growth of the oil and gas industry in Michigan in the near-term future,” according to the assessment. “However, considerable reserves of natural gas are believed to exist in deep shale formations such as the Utica-Collingwood, which underlies much of Michigan and eastern Lake Huron and extends into Ontario.”

The “recent flurry” to acquire mineral rights associated with exploratory drilling, however, “suggests the potential for growth in natural gas production through high-volume hydraulic fracturing, though only a handful of such wells have been drilled to date. Michigan is thus in a unique position to assess the future of high-volume hydraulic fracturing before the gas boom begins.”

Potential impacts from growing unconventional drilling “are significant and include increased erosion and sedimentation, increased risk of aquatic contamination from chemical spills or equipment runoff, habitat fragmentation and resulting impacts on aquatic and terrestrial organisms, loss of stream riparian zones, and reduction of surface waters available to plants and animals due to the lowering of groundwater levels,” the faculty-led research found.

“Possible hazards in the surrounding environment include impaired local and regional air quality, water pollution and degradation of ecosystems. Possible hazards in nearby communities include increased traffic and motor vehicle accidents, stress related to risk perception among residents, and boomtown-associated effects such as a strained health care system and road degradation.”

Unlike many other states that are drilling unconventional wells, Michigan’s Department of Environmental Quality (DEQ) doesn’t require operators to report chemical substances used in drilling through FracFocus.org, the nationwide chemical disclosure registry, researchers said. Operators are, however, required to disclose hazardous constituents of chemical additives to the DEQ for each additive within 60 days of well completion.

“The gas extraction industry creates employment and income for Michigan, but the employment effects are modest compared with other industries and not large enough to ‘make or break’ the state’s economy” at this point in the game, researchers concluded. “In the future, the number of technical jobs in the industry will likely increase, while less-skilled laborer positions will decline.”

Most Michiganders surveyed “believe the benefits of fracking outweigh the risks, but significant concerns remain about the potential impacts to human health, the environment and groundwater quality,” the researchers said.