Louisiana’s economic output will grow by $30 billion between 2011 and 2019 as a result of natural gas-induced investment, according to a report by Louisiana State University’s Center for Energy Studies that details the impact of the natural gas boom on the state. 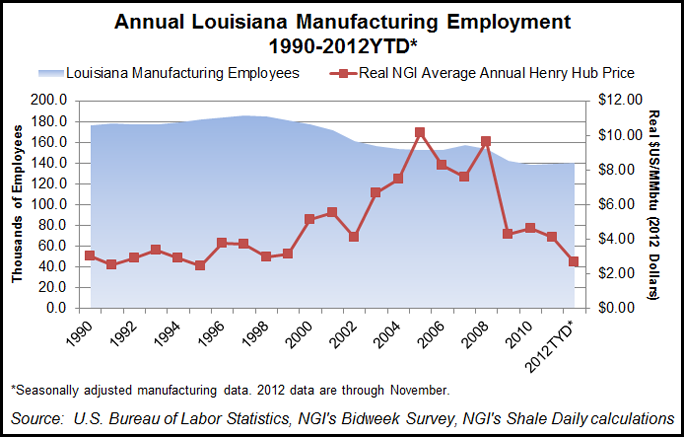 The study, “Unconventional Resources and Louisiana’s Manufacturing Development Renaissance,” estimated that the new investment will increase wages by more than $9 billion and create 214,000 job-years over the period.

The primary driver of the growth will be the state’s manufacturing industry, which uses natural gas to meet 90% of its fuel needs. Three-quarters of the projected job growth will occur in the state’s industrial south, primarily around New Orleans.

Slightly more than half of the planned expenditures are at existing facilities. Proposed facility expansions in the natural gas-to-liquids (GTL) industry are worth $22.5 billion. The second biggest commercial GTL plant in the world is slated to open in 2018. The $16-21 billion plant is being constructed by South Africa’s Sasol Ltd. (see Shale Daily, Dec. 4, 2012). Also, Royal Dutch Shell plc has proposed to build a $10 billion GTL plant in 2019. The plants will produce diesel, jet fuel and a variety of other chemical products.

The liquified natural gas (LNG) export sector is the second largest investment destination, with projects worth $19.5 billion proposed, according to the report. So far, only Sabine Pass LNG in Cameron, LA, has been authorized by the U.S. Department of Energy to export to the world market; others are caught in the ongoing battle between manufacturers, such as those in Louisiana that want to use cheap natural gas at home and export their products, and producers that would like to reach a larger market for their gas volumes (see Shale Daily, Dec. 10, 2012).

Other sectors that are expanding in Louisiana as a result of cheap natural gas include the fertilizer industry and the petrochemical industry (see Shale Daily, Jan. 17). In total, there are $62.3 billion in manufacturing investments planned. Note that not all of the economic benefits from the projects will flow to Louisiana; other states and other sectors of the state’s economy will benefit as well. Retail stores are projected to gain about 11,000 jobs thanks to growth driven by cheap natural gas.

However, more recently, growth in the Haynesville has slowed as producers move away from its dry gas to more profitable liquids-rich plays. For the week ending Jan. 18, there were 35 unconventional rigs running in the Haynesville, down from 88 one year ago, according to NGI’s Shale Daily Unconventional Rig Count.