The average spot basis at many natural gas trading hubs in the United States narrowed during the first half of 2020 (1H2020) versus the same period last year, the Energy Information Administration (EIA) said Tuesday, citing NGI data. 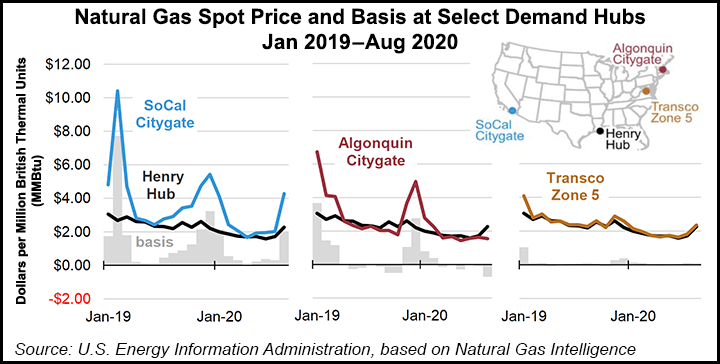 Basis refers to the difference between the natural gas price at a given hub and the Henry Hub benchmark.

At some supply hubs, meanwhile, the basis was narrowed because of decreases in natural gas production.

“Declines in economic activity related to the coronavirus disease (Covid-19) and its mitigation efforts generally further narrowed the basis at both demand and supply hubs,” researchers said.

Mild winter temperatures in New England helped drive a lower premium to Henry Hub than in past years at Algonquin Citygate, researchers said. As a result, the basis there turned negative by March instead of the historically typical timeframe of April or May.

Pipeline repair completions and additional flexibility withdrawing natural gas from the Aliso Canyon storage facility narrowed the basis at SoCal Citygate in early 2020, researchers said. The basis price there had peaked at nearly $8/MMBtu in February 2019 because of cold weather and pipeline constraints.

After generally remaining narrow from January-July this year, the SoCal Citygate basis price briefly spiked to $11/MMBtu in August amid an intense heat wave that led the California Independent System Operator to issue rotating power outages.

At the Waha hub in West Texas, in the heart of the Permian Basin, the basis narrowed in 1H2020 as a result of low crude oil prices and reduced production of associated natural gas, the EIA team said.

At the Dominion South hub in the gassy Appalachian Basin, meanwhile, the basis price was relatively unchanged in 1H2020 versus the year-ago period, researchers said.

Whether the trend of narrowing basis differentials at regional hubs will extend through the 2020/2021 winter remains to be seen.

Algonquin Citygate gas for delivery in January and February 2021 recently traded at a premium to Henry Hub of more than $3.600, according to Tuesday’s issue of NGI’s Forward Look. This comes as Nymex futures for delivery at Henry Hub have climbed to around $3.200-3.300 for the peak winter months.

On the opposite coast, SoCal Citygate basis prices in the latest Forward Look averaged $1.882 for December, $1.602 for January and $1.277 for February.

Meanwhile, negative basis differentials for hubs in major producing regions are poised to narrow as downstream demand climbs this winter. Dominion South basis recently traded around minus 45.0 cents for the December 2020-to-March 2021 timeframe, versus minus $1.283 for October 2020. Trading activity showed Waha basis narrowing to minus 28.1 cents by January 2021, versus minus 83.6 cents for October 2020, according to Forward Look data.