Natural gas basis markets remained in a lull for the second week of March, with prompt-month prices shifting less than five cents at most market hubs, amid forecasts for mostly mild weather across the United States. 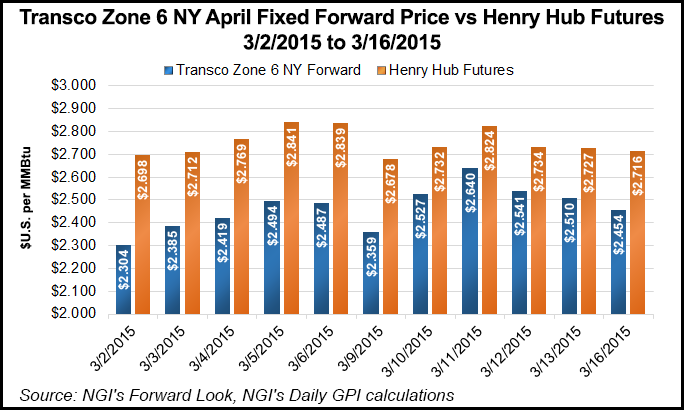 The lackluster activity along forward curves came as Nymex futures climbed 5.6 cents from Monday, March 9, to Thursday, March 12, gains which were accumulated ahead of the week’s storage report from the U.S. Energy Information Administration.

And while the EIA’s reported storage withdrawal was slightly higher than expected and a record for March, futures ultimately fell Thursday as the mild weather on tap for most of the country proved too difficult for traders to ignore.

Forecasters with NatGasWeather have called for a few more weather systems to make their way into the Northeast over the next couple of weeks, but whether those systems are strong enough to drive significant heating demand in and beyond that region is still uncertain.

“The cold blast for the end of [the March 16-20] week does look quite strong and should impact a greater portion of the northern U.S. to drive a period of stronger-than-normal heating demand,” NatGasWeather said. “But once again, this one is also showing flaws where it could trend warmer as well. It will then be up to additional weather systems and associated cold blasts to follow after March 23-24 for stronger-than-normal heating demand to continue, which the data still suggests there’s potential for, but with not a lot of support.”

Like so many traders appear to believe, the forecasters suggest that the heating demand season could be very close to being over if colder weather patterns fail to show up more definitively after March 24.

Transco zone 6-New York April basis jumped 12.6 cents between Monday and Thursday to reach minus 19.3 cents/MMBtu, according to NGI’sForward Look.

A Northeast trader attributed the strength to power marketers bidding up the price as the cold snaps continue in the region.

“Power traders rule the Northeast now. They dictate all the activity,” he said.

The trader warned, however, that once the cold weather subsides, prices would likely fluctuate within a 40-cent range throughout the summer.

Meanwhile, Williams’ Transco pipeline last week filed a request with the Federal Energy Regulatory Commission to bring the Rockaway Lateral into service on April 23, according to Genscape.

The Rockaway Lateral will add a delivery point into New York City onto National Grid’s system, moving up to roughly 630 MMcf/d of gas into Brooklyn.

Further out the curve, Transco zone 6-New York May basis tacked on just 3 cents to hit minus 20.7 cents/MMBtu, while the balance of summer (May-October) edged up 4.3 cents to minus 40.4 cents/MMBtu.

At the typically more volatile Algonquin Gas Transmission city-gates in New England, April fell 2.5 cents to plus 75.3 cents/MMBtu, while May rose 5.1 cents to minus 35.2 cents/MMBtu. Like New York, strength was seen in Algonquin’s balance-of-summer package, which picked up 3.3 cents to reach minus 7.7 cents/MMBtu.

Over in the West, similar modest strength was seen in California markets as the region was poised to see a brief bump in demand due to unusually warm weather moving into the region during the week.

Southern California Gas April basis tacked on 1.3 cents between Monday and Thursday to reach minus 13 cents/MMBtu; May and the balance of summer each moved up 1.7 cents to minus 13.4 cents/MMBtu and minus 7.2 cents/MMBtu, respectively.

Meanwhile, a weak hydro picture remains positive news for natural gas, although the extent to which natural gas fills the gap of low hydro supplies remains uncertain as other renewable energy sources, like solar, also will likely step in this summer.

Genscape is projecting gas-fired power generation demand could reach 5.3 Bcf/d throughout the Western Electricity Coordinating Council (WECC) between March and the end of July due to the lower water supplies.