The energy industry has to counter the view that renewables are the only way to reduce carbon emissions and instead make the case for natural gas to remove any doubts about its long-term benefits, a group of the leading global CEOs said Tuesday. 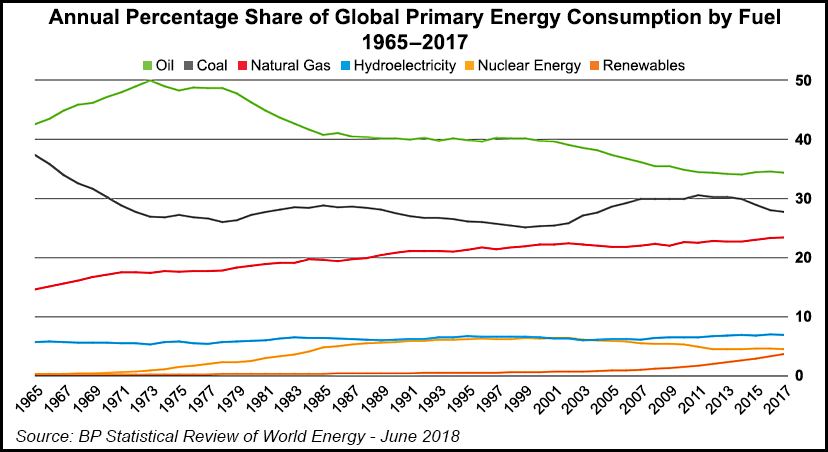 “Gas is going to be more and more important than ever as part of the energy mix going forward,” Dudley said. “We know that because gas is very abundant, and it’s affordable…And if you use it instead of coal for power generation, you could cut the sector’s carbon emissions by half.”

BP earlier this month issued its esteemed Statistical Review of World Energy, which reported that natural gas last year accounted for the largest increment in global energy consumption, followed by renewables and then oil. The gas trade also expanded by 6.2%, with growth in liquefied natural gas outpacing the pipeline trade, as it did in 2016. More accessibility and integration should help to underpin the long-term use of gas, BP researchers found.

Gas can help the globe move toward a “cleaner” energy future, and any attempt to discount its value is “really unfortunate,” Dudley said. “I think it deprives the world of one of the key means” to meet the goals set by nearly 200 nations in late 2015 at the Conference of Parties, or COP21, to the United Nations Framework Convention on Climate Change.

The need to resolve the dangers of climate change — and use gas to do so — was stressed at the afternoon plenary.

Renewables are important, “but it cannot be a race to just renewables,” Dudley said. “It has to be a race to reduce emissions.” Part of ensuring that operators fully articulate the central role for gas to help solve the climate change issue involves getting ahead on the game on methane emissions, he said.

Another challenge is “helping people recognize gas as a destination fuel, not just a transition fuel. It’s part of the low-carbon future, not just a tool for getting there.”

To further the goal to make gas a destination fuel and not only a bridge to renewables, companies need to push forward to construct adequate infrastructure for gas and build a global market. They also have to invest in carbon capture and storage, as well as push for carbon pricing, the BP CEO said.

Partnering natural gas with renewable power systems is “a great combination,” Dudley said. But renewables cannot do the job alone.

“This idea of natural gas as a transition fuel to renewables is strange,” Pouyanne said. “Natural gas is a solution” to climate change, as it’s been “scientifically proven.”

ConocoPhillips’ Lance, who runs the largest independent in the world, said, “We don’t believe the existential threat to our business is right around the corner” from renewables growth. “We see rising usage of natural gas.”

Qatar Petroleum, already one of the world’s largest gas producers, has begun an expansion to increase output by about 33% in the next 10 years. Demand is only rising, said Al-Kaabi.

“Human beings need energy,” he said “Gas should be seen as a destination fuel not just as a transport fuel or bridge fuel.”

There will continue to be a “huge demand” for gas going forward. The gas “glut” that some experts see “will be over” by the mid 2020s at the latest, Al-Kaabi said. “I think we realized last winter that the market needs more gas probably earlier than we thought,” referring to the longer-than-expected cold temperatures that lingered across North America into April.

The challenge is to ensure there is enough infrastructure, said the Qatar executive.

“I think the market for gas is there, and it’s going to be there for a long time,” Al-Kaabi said “The challenge is to have what is required…” to ensure it can be adequately and safely delivered to worldwide destinations.

The board of Equinor, formerly Statoil, changed its name earlier this year to acknowledge the transition to low-carbon fuels. “There is a place for gas,” Anfinnsen said. “It is a challenge. But we do believe gas can play a role even in a low- or no-emissions carbon future.”

Technologies now include separating gas into hydrogen and carbon dioxide (CO2) and then capturing the CO2 and storing it. The carbon capture “can make zero carbon energy at a large scale,” Anfinnsen said. “Storage capacity in reservoirs is vast…and it’s a proven, safe and secure technology.”

The bottom line is, “we don’t have to be green to be clean,” said the Equinor executive. “We are succeeding in efforts that will make natural gas both competitive and an important part of the fuel mix in the future and beyond 2050. Even in a deep, decarbonized economy…But it has to be supported by policy at national and international levels.”

Everyone on the panel acknowledged that the industry has to do more to combat methane emissions.

“The industry has a problem and the whole industry has to have a better reputation,” Dudley said. “I’m confident in the work we’re doing.”