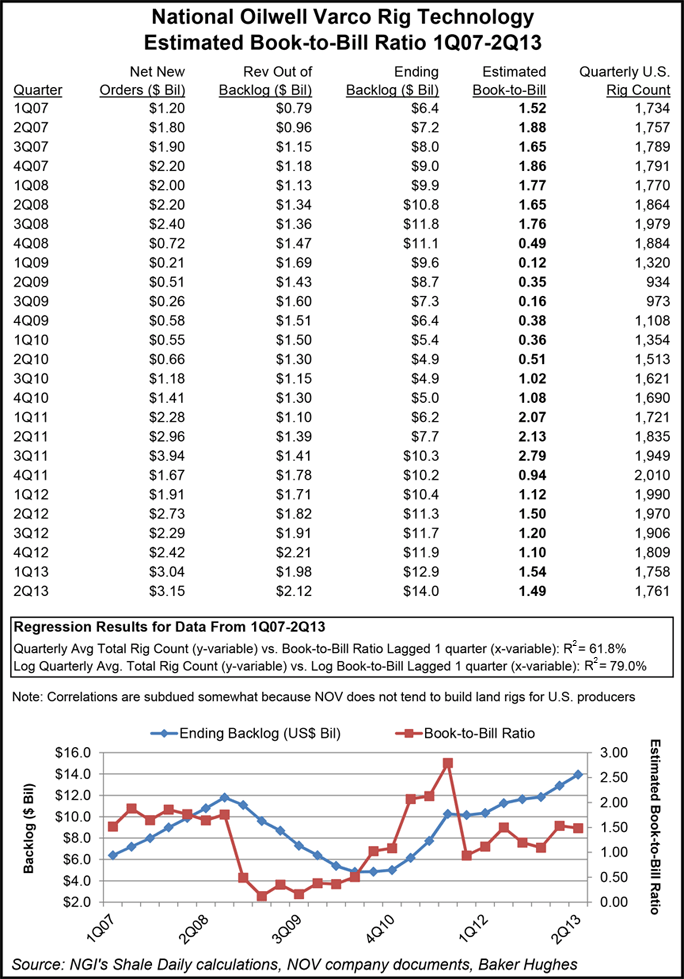 “Of the total backlog, approximately 93% is offshore, and 95% is destined for international markets,” CFO Jeremy Thigpen said during an earnings conference call with analysts. “We expect roughly $4 billion to flow out of backlog the second half of the year.”

The record backlog came as orders for new floaters and jackups continued at a strong pace, and orders for NOV’s floating production equipment more than doubled compared to 1Q2013. “Looking into the third quarter of 2013, we expect orders for new drilling equipment packages and floating production equipment to remain strong, and we hope to see pent-up demand for new land rigs in Latin America and the Middle East to finally materialize into orders,” Thigpen said.

The book-to-bill ratio for NOV represents the amount of additions to the backlog divided by the amount of revenue that was booked from backlog during that same period. While the ratio itself will not explain 100% of the changes in backlog from period to period because it does not incorporate things such as turns business (orders taken and filled in the same period), cancellations and order push-outs, book-to-bill ratios above 1.00 generally indicate that backlog grew during its measurement period.

Rig technology, the company’s largest and most profitable segment, reported $2.83 billion of revenue in 2Q2013, an 18% increase from 2Q2012. Revenue out of backlog for the segment increased 7% sequentially and increased 17% year-over-year to $2.12 billion. Analysts keep an eye on the rig technology segment because, in general, it lags the commodity price cycle by a few quarters, which reflects the timing of its supply backlog.

R&M was one of more than a half-dozen acquisitions NOV made in 2012 (see Shale DailyAug. 10, 2012). That shopping spree, and expansions NOV continues to make, are paying dividends, according to COO Clay Williams.

“I think these expansions that we’re doing are really going to be beneficial for us as we move into 2014 especially. It really gets us a lot more efficient operations, does a lot of cool things for us on products and services, and I think they’ll be very, very beneficial for us. Shale development worldwide continues; we’re poised to be able to take advantage of that, we think we’re in the right places; we’re going to be there at the right time, and I think it’s going to be very beneficial.”

In the distribution and services segment, quarterly revenues reached $1.3 billion, a leap of 66% compared with 2Q2012, due mostly to the mergers completed last year.

Analysts with Tudor, Pickering and Holt & Co. called NOV’s 2Q2012 results “fine” but said a margin downtick in the rig technology segment “will grab attention.” Traders may focus on the segment’s margins, wanting “comfort that margins can head back towards guided range,” the analysts said.

Houston-based NOV had reported that sales decreased in all three of its operating segments in 1Q2013 compared with 4Q2012 (see Shale Daily, April 29). NOV designs, manufactures and sells an array of equipment for oil and gas drilling and production operations in the onshore and offshore.