Covid-19’s impact on demand has tossed aside forecasts for the oil and gas industry, but there’s still a solid future for the fossil-fueled world, the chief of National Oilwell Varco Inc. (NOV) said Tuesday. 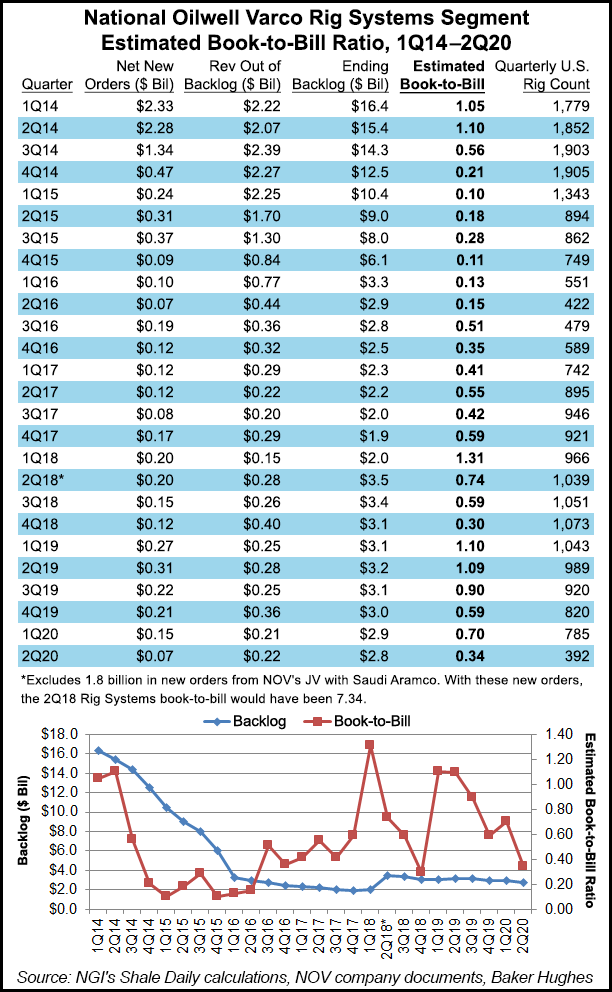 During a conference call to discuss second quarter performance, CEO Clay Williams said the downturn from the coronavirus is unlike anything he had witnessed in his 35-year career. Still, there will be opportunities when the inevitable upturn begins.

NOV saw its consolidated revenue decline by 21% sequentially in 2Q2020 “as everybody in the oilfield hunkered down to cut costs and prayed that the storm would pass,” Williams said. “As bad as this quarter was, it certainly would have been far worse” if the company had not undertaken aggressive cost cutting actions.

“However, our customers were also pretty good at reducing cost and preserving cash. So in addition to the operational headwinds brought about by Covid-19 facility closures, quarantine requirements and travel bans, we also faced the rapid deceleration of business in many areas.”
Exploration and production (E&P) customers “halted all but the most necessary purchases.”

In the North American land segment, “the violent reaction felt almost involuntary, like a reflex…Nobody in the oilfield was immune to this unprecedented collapse in the industry.”

In addition, some of NOV’s competitors “won’t quite make it to the next payroll cycle” as bankruptcies and liquidations are accelerating. Some E&Ps have shifted their work to NOV “because they know we will make it through this downturn and will be there for the long haul.”

Workover and production-related activity also have dipped sharply. Many domestic pipe mills that provide materials for NOV have shuttered since March.

“There is essentially no demand for drill pipe rig spares or coiled tubing strings in North America land…Contractors are cannibalizing stacked assets aggressively,” negating the need for new equipment. Additionally, coiled tubing strings are being run well past established strategic life limits before they are being replaced, a trend that is further eroding demand,” Williams said. “Eventually this will lead to service failures, potentially lost wells and heartbreak, but I guess desperate times call for desperate measures.”

Day rates for land drillers also are declining, now at around $15,000-18,000/day from the low-to-mid $20,000s, which “is likely only marginally above cash cost to run a drilling rig for all but the most efficient drilling contractors and may in fact be cash flow negative,” the CEO said.

There may be some work in the back half of the year, as many of the unconventional E&P customers indicate they plan to “add a rig or two…and will likely try to lock in these bargain day rates…Additionally, NOV is being asked to bid one-year term pricing in certain well site services, historically a good leading indicator that some customers are planning on increasing drilling activity…”
Does he believe it? “Having heard mythical stories of green shoots at the bottom of prior down cycles, hope springs eternal, and sometimes in the oilfield, hope gets a little exaggerated.”

During the second quarter, “there were virtually no orders being placed domestically for pressure pumping equipment,” said the CEO.

Some operators with deeper pockets are looking beyond cost cutting to add equipment with the seal of approval from the environmental, societal and governance (ESG) movement.

“We’re hearing…that dual-fuel capabilities and other ESG-friendly offerings will be required by some customers on all future work,” Williams said. “The offshore drilling space is experiencing a similar trend, which is driving more interest in our PowerBlade,” a kinetic energy recovery system.

More broadly, the oil and gas majors “are mandating certain upgrades and capabilities as a requirement of new contracts. Even though the service sector has scant capital to invest in its service fleet, their customers, the oil companies, are requiring new and better kit, because, well, they can. They have the negotiating leverage, and they use it in times like these to get what they really want. We’ve seen this in the past.”

Driving future orders is the name of the game, he said. “This can be a good thing for oilfield service companies that can pass this test to build, buy or rent, but somehow secure the necessary capability when the contract is emerging to a world with a few survivors.”

NOV’s revenue fell 30% year/year and 21% sequentially to $1.5 billion. All three business segments were down from a year ago and from 1Q2020.

New orders booked in CPS during the quarter totaled $196 million, representing a book-to-bill of 51% when compared to the $388 million of orders shipped from backlog. At the end of June, the backlog for CPS capital equipment orders was $1 billion.

The Rig Technologies segment generated revenue of $476 million, a decrease of 29% year/year and down 15% sequentially. Operating loss was $25 million, or minus 5.3% of sales.

New Rig Technologies orders booked during 2Q2020 totaled $74 million, representing a book-to-bill of 34% when compared to the $219 million of orders shipped from backlog. Backlog for capital equipment orders at the end of June was $2.79 billion.