National oil companies (NOC) across the world plan to cut exploration budgets by more than a quarter on average in 2020, according to new research by Wood Mackenzie. 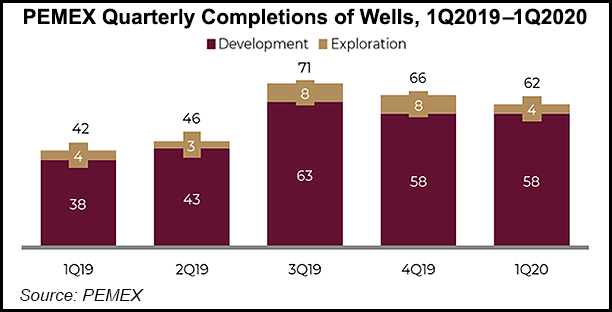 The analysis is based on announcements of 11 top NOC explorers, including Mexico’s Petróleos Mexicanos (Pemex) and Brazil’s Petróleo Brasileiro SA (Petrobras).

“While the range of exploration budget cuts for the NOCs is slightly more diversified than that of the majors, conventional exploration remains important for them,” said Wood Mackenzie senior analyst Huong Tra Ho.

“Exploration budget cuts, while necessary today, will impact companies’ future growth and sustainability,” said Ho. “Given how important exploration is for the NOCs and their growing share of global new discoveries, these budget cuts are likely short-term measures rather than long-term. We expect NOCs to revitalize their exploration programs as the sector recovers.”

In the case of Latin America, where NOCs play a large role in national economies, the picture is especially complicated and varies from country to country, according to panelists who discussed international oil companies on Thursday at the Institute of the Americas’ La Jolla Conference, which this year is being held virtually.

Some NOCs, like Pemex and Argentina’s Yacimientos Petrolíferos Fiscales SA (YPF), will find it difficult to withstand a prolonged period of low oil prices and uncertainty, according to Fitch Ratings senior director Luis Aristizabal.

Both YPF and Pemex had economics that were poor before the current crisis, where “the cost of extraction added up to more than what the products were worth.”

Even given government intervention in Argentina that fixes the price of oil at $45/bbl, YPF will find making money difficult, said Aristizabal.

On the other end of the spectrum are Petrobras and Colombia’s Ecopetrol SA, which have “done a tremendous amount of work to improve their cost position over the past three years” by paying down debt and converting into investment grade companies.

Petrobras also cut its capex, by $3.5 billion. Even still, the Organization of the Petroleum Exporting Countries sees Brazil liquids production growing by 19,000 b/d this year.

The panelists argued that NOCs will also see their traditional role as economic saviors diminished by the severity of the downturn.

“What we expect is that in 2020 and 2021 we will see lower distributions from NOCs into government,” said Aristizabal. “Dividends will come down for Ecopetrol, and for Petrobras. You will see lower royalties. If a government wants its NOC to play a significant role in the recovery, it will put additional pressure on their capital structure and will make it harder to attract private capital.”

“The gold rush is largely over,” he said. “Just like the gold rush, it doesn’t mean you stop making money. But it requires incredibly more efficient types of companies.”

New research by Fitch suggested that during 2020, all oil and gas companies working in Latin America will see profitability decline to one third of 2019 levels, with cash flow under pressure through 2021.

One potential outcome is a drive to privatization in some countries, according to Rice University’s Francisco Monaldi.

“These are unprecedented times, and we can expect it will take a while to get back,” said Monaldi. “If that is the case, we can expect that the NOCs in worse shape will be the ones in which the government itself is going to be in trouble.”

He argued that in Argentina, Ecuador and Venezuela, “you are likely to see a bigger role for the private sector,” as NOCs retrench and governments get desperate for money.

“But even in NOCs in better shape, like Ecopetrol and Petrobras, this is still pretty tough for any company.”

The case for Mexico’s Pemex is clouded by a government that is determined to prop up the hydrocarbons industry and to keep it firmly in state hands, said Monaldi.

“Mexico is a very diversified economy, but the problem is Pemex is deeply indebted, and so Pemex might drag the government down with them,” he said. “The president has shown no signs of being pragmatic.” And if Mexico does turn to the private sector, “it might be too late.”

Marta Jara, the former CEO of Uruguay’s state oil company Administración Nacional de Combustibles, Alcohol y Portland (Ancap), said during the panel discussion that now is the time for NOCs to work toward the energy transition.

“These days, governments are trying to develop fiscal packages, and some of this money needs to go to the development and growth of better energy systems,” she said.

“NOCs are a source of cash and power,” she said, with huge workforces making them hard to change, “but if the NOC has any future, it has to be nimble and adapt.”