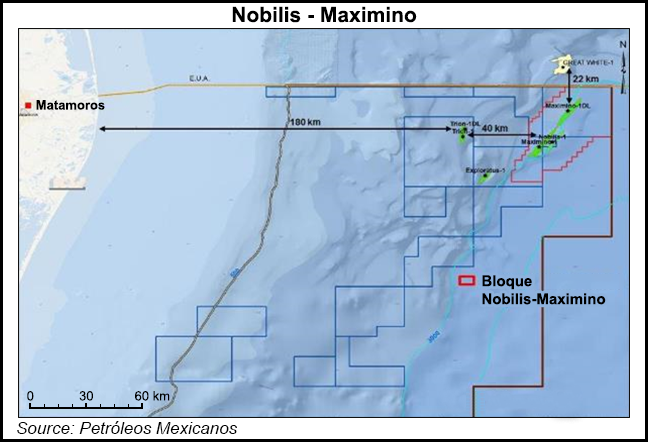 CNH published in the official gazette on Monday a call for bids to develop the Nobilis-Maximino project in the Gulf of Mexico (GOM) Perdido Fold Belt. The tender winner is to receive a 51% operating interest in the project, which it would jointly explore with state-owned Petroleos Mexicanos (Pemex).

“The Nobilis-Maximino farmout is fundamental to the Petroleos Mexicanos strategy of fostering partnerships that strengthen its operating, financial and technological capabilities,” Pemex said. “As set out by the 2017-2021 business plan, these alliances are a key element” in Pemex efforts “to establish itself as modern, competitive and profitable company, since they allow it to share exploration and production risks in its fields and fully exploit the benefits granted under the energy reforms.”

Nobilis-Maximino is estimated to hold 501 million boe of proved, probable and possible, i.e. 3P reserves, consisting of 220 million bbl of mostly light oil and 524 Bcf of natural gas, according to CNH.

The commission said it would receive prequalification applications from Nov. 6-11 and release a list of prequalified companies on Dec. 20. A final list of bidders is to be published on Jan. 24, with bid proposals opened on Jan. 31.

The winning bidder would sign a 35-year license contract, one of the new contractual models introduced by the reforms. The license has a carry of $815 million. Bidders must also commit to a minimum work program that is indexed to Brent prices. At $55-60/bbl, the program would entail a commitment of around $257 million.

In August, CNH President Juan Carlos Zepeda told Reuters that the Nobilis-Maximino would require around $10.7 billion to develop and could add 174,000 boe/d of output, with first commercial oil expected by 2024.

The Nobilis-Maximino tender coincides with the upcoming licensing round 2.4, which is to offer 30 exploration and production (E&P) blocks in the Perdido and other deepwater areas.

Pemex is seeking international capital and technical know-how to develop its deepwater assets. The deepwater projects are part of an aggressive farmout program intended to revive the company’s flagging oil production, beset by losses at the aging supergiant Cantarell and expected declines at the Ku-Maloob-Zaap (KMZ) field.

The Nobilis-Maximino project consists of three blocks spanning 1,524 square kilometers (947 square miles) in an area with an average water depth of 3,000 meters.

Pemex made four discoveries after drilling nine wells in the field between 2012 and 2016. The two main discoveries, at the Nobilis and Maximino wells, were each at depths of more than 6,000 meters.

The field also holds 171 million boe of contingent resources at the Supremus and Mirus discoveries and 715 million boe of prospective resources, according to presentation documents from Pemex’s Farmout Day, held earlier this year in Houston.

The Perdido Fold Belt is one of the most productive areas in the GOM. Nobilis-Maximino is about 20 kilometers (12.4 miles) from Royal Dutch Shell Plc’s Great White project in U.S. waters and 40 kilometers (25 miles) from Pemex’s 2012 Trion discovery.