National Grid is turning to electricity from Canada to try to lower energy costs for consumers in New England, where natural gas pipeline constraints have raised concerns over reliability and caused price spikes during recent winters. 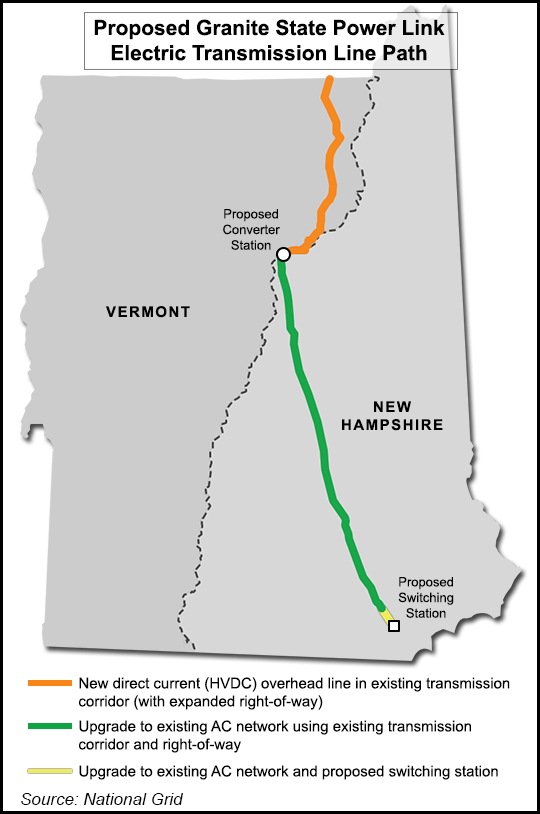 The utility on Tuesday announced plans to build the Granite State Power Link (GSPL), a 1,200 MW transmission line designed to transport electricity from Canada into the New England power grid. GSPL would include two segments: a high-voltage, direct current overhead line from the international border at Norton, VT, to a new converter station in Monroe, NH, and an upgrade of an existing overhead line in NH to accommodate the additional power flow.

GSPL would run almost entirely along existing transmission corridors. Funding would come from National Grid and its investors and not through ratepayers of its regulated utilities, the company said.

“We believe this proposed project reflects the priorities we’ve heard from state and local communities on their need for lower cost, energy efficient and environmentally sound solutions,” said National Grid’s John Flynn, senior vice president of Business Development. “The GSPL meets these tests; our stakeholder engagement and outreach is underway and we look forward to continuing our work with communities of all types to earn their support. Community dialogue and engagement will be a hallmark of GSPL.”

GSPL is one of a number of proposals aimed at lowering energy costs in New England, where the current natural gas pipeline infrastructure has been unable to consistently satisfy both heating and power demand during the winter months, leading to price volatility.

National Grid, along with fellow New England electric utility Eversource Energy, signed on as a customer for Spectra Energy’s Access Northeast expansion. But the project — designed to reduce seasonal volatility by supplying electric generators reluctant to commit to long-term firm transportation — stalled after not getting enough buy-in at the state level and after a setback at FERC over a proposed capacity release waiver.

Before that, Tennessee Gas Pipeline Co. shelved its Northeast Energy Direct expansion, in part due to a lack of firm commitments from electric generators.

The proposed Marcellus-to-New England Constitution Pipeline stalled last year over the state of New York’s denial of a crucial water permit. And New York appears eager to position itself to slow down progress of National Fuel Gas Co.’s Northern Access expansion, which received a Natural Gas Act certificate in February from the Federal Energy Regulatory Commission.