National Grid believes that there will be a gas shortfall in lower New York state in the winter of 2022-2023 if new infrastructure projects aren’t able to go ahead. 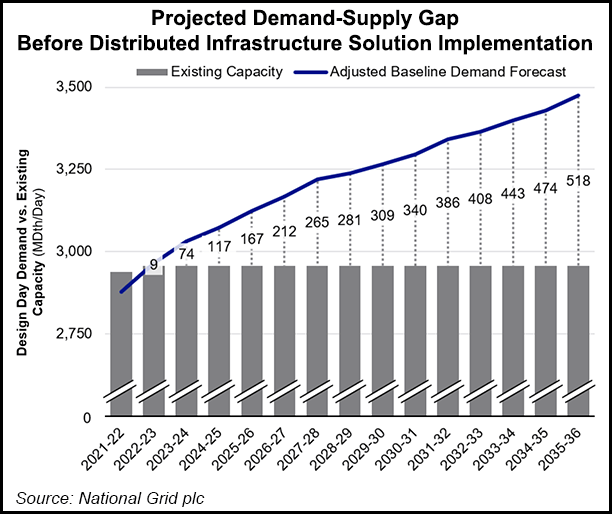 Without new infrastructure, a gap of 9,000 Dth/d would open up and continue to grow to a gap of 518,000 Dth/d in 2035-2036, the utility said. The findings are part of a new 180-page report on gas capacity in the downstate New York region. The company serves 1.9 million customers throughout the New York City boroughs of Brooklyn, Queens, and Staten Island, as well as  Long Island.

The supply gap is slightly larger and starts earlier than the one projected in a similar report released last year, National Grid said. This is because of an adjustment to baseline demand forecasts.

[Tune In: Join NGI Price & Markets Editor Leticia Gonzales as she sits down with EIA Energy Economist Stephen York to discuss the recent ramp up in natural gas prices, the fundamentals driving it and where the price might be headed for the upcoming winter. Listen now.]

The report comes amid uncertain times for the fuel in New York City. Mayor Bill de Blasio has said the metropolis must “say goodbye to fossil fuels.” This includes banning fossil fuel connections in new construction by 2030 at the latest, and decarbonizing the city’s pension fund investments.

A lack of natural gas infrastructure serving the city and surrounding suburbs also has led to moratoriums on new service. It’s not yet clear what the position of the new administration in New York will take. A new mayor is to assume office early next year.

Last year, National Grid came up with the Distributed Infrastructure Solution (DIS), which was a combination of incremental energy efficiency and demand response programs. It also programs for distributed infrastructure projects to expand the capacity of existing gas infrastructure. The company said the DIS remains the best solution to meet the impending shortage.

Collectively, all of these components “are critically important to meeting gas demand over these next few winters,” National Grid said. Still, the plan relies on gas demand reduction to meet 75% of the projected demand-supply gap in 2035-2036.

The company has struggled, however, to get permitting for the infrastructure.

The Iroquois project is also still awaiting approval, with necessary permits and approvals not expected until 2022. To meet energy transition objectives, New York City’s other major utility, Consolidated Edison Inc., is pushing energy efficiency programs and developing renewable energy capacity. It is also working with researchers to determine if hydrogen or renewable natural gas (RNG), or both, could be used in the natural gas pipeline system.