A National Fuel Gas Co. (NFG) midstream subsidiary has asked FERC for permission to begin partial service on its West Side Expansion and Modernization Project in Western Pennsylvania two months ahead of its previously planned in-service date. 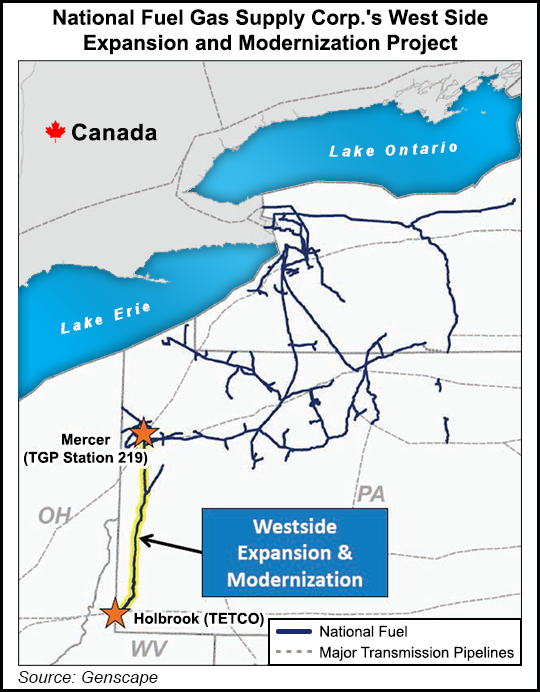 NFG started construction on the expansion in March to increase capacity on its Line N pipeline system in Washington, Allegheny, Beaver, Venango and Mercer counties, PA. The project would boost incremental capacity on the system by 175,000 Dth/d. It is fully subscribed under long-term agreements with Range Resources Corp. for 145,000 Dth/d and with NFG exploration and production subsidiary Seneca Resources Corp. for 30,000 Dth/d.

The company filed its request for partial service with the Federal Energy Regulatory Commission last week, asking that it be allowed to commence partial service for Range beginning Sept. 1 ahead of its original Nov. 1 in-service date. Before full service can begin, however, NFG must complete the rest of its modifications on the Line N system.

NFG filed to expand the pipeline in February 2014. It consists of replacing 23 miles of 20-inch diameter pipe with 24-inch pipe; installing a 3,550 hp compressor at its Mercer County station, and making piping modifications at its Henderson compressor station in Venango County.

NFG has asked FERC to let it place the Mercer and Henderson compressors into service by Sept. 1. In a filing earlier this month, NFG said 56% of the new pipeline has been installed and about half of its backfilling is finished. After the expansion, Line N would have a capacity of 633,000 Dth/d.