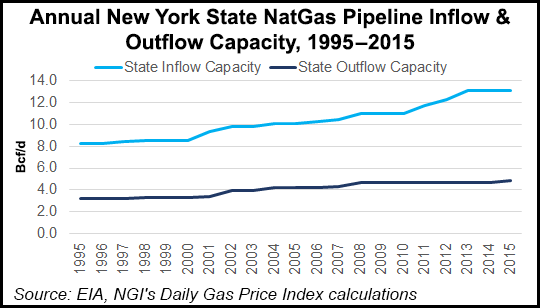 In a request for reconsideration and clarification or, in the alternative, rehearing, the companies state that the Federal Energy Regulatory Commission’s order “erred” by not finding that NYSDEC stream crossing, water withdrawal and wetlands permits, among other requirements, are preempted by the Natural Gas Act and not required to begin construction. They also argue that the state waived its requirement for the project to obtain a water quality certification when it failed to issue one by Oct. 25, 2016 — at the end of the federal authorization period under the scheduled environmental review.

The companies added that FERC’s order was confusing because it authorized the NYSDEC to review and approve two compressor units. The companies said that by failing to clarify the necessity of state air emissions permits, the Commission suggested that New York has a role to play in permitting natural gas pipelines. Moreover, National Fuel and Empire said the Commission should clarify that state agency approval or authorization of an invasive plant species management plan is also preempted, adding that NYSDEC has yet to approve a plan they submitted last August.

“The Commission should clarify that states cannot delay or block construction of the project by attempting to withhold their cooperation, concurrence or approval of any plan developed by applicants,” the companies said.

The more than 490,000 Dth/d Northern Access project would expand the Empire and National Fuel systems to move gas from Seneca Resources Corp.-operated wells in Northwest Pennsylvania to markets in New York, Canada and the Northeast and Midwest.

It would consist of 99-miles of new pipeline in McKean County, PA, and Allegheny, Cattaraugus, Niagara and Erie counties, NY. Parent National Fuel Gas Co. (NFG) has said more infrastructure is key to Seneca’s operations in Pennsylvania, where capacity constraints have subjected the producer to high basis differentials.

The project has become another flashpoint in the ongoing battle over the pipeline buildout tied to shale production in Appalachia. Environmental groups have already filed a rehearing request with FERC citing deficiencies in its Northern Access order.

The company also appears on edge about New York, which has banned high-volume hydraulic fracturing. The NYSDEC is also fighting in court about its regulatory handling of both the Constitution and Millennium pipeline projects. Constitution’s backers, for example, have filed an appeal with the U.S. Circuit Court of Appeals for the Second Circuit over the agency’s refusal to issue a water quality certification for the pipeline, which has held up the project. An appeal was also filed in the U.S. District Court for the Northern District of New York, where Cabot Oil & Gas Corp. is seeking declaration that the state’s permitting authority is preempted by federal law.

Empire and National Fuel’s latest FERC filing would essentially force the Commission to confront those kinds of legal battles.

Northern Access was initially scheduled to enter service in late 2016, but NFG said early last year that it would delay the project until late 2017 on reduced drilling activity caused by the commodities downturn. It is now targeting a 2Q2018 in-service date. The company said last month that it expects to receive the New York state permits in April after the agency issued notices of complete applications for them.

“We’re encouraged that the [NYSDEC]…is moving along with the permitting process for our Northern Access project,” said NFG CEO Ronald Tanski during the company’s fiscal first quarter earnings call in February. “However, we’re also aware that there are two other pipeline companies that are currently in litigation with the [NYSDEC] with respect to the status of the permits for their projects.”

Empire and National Fuel have clashed with the agency during the regulatory process about whether the project would require state permits to begin construction. For its part, NYSDEC has argued that FERC has always required projects to receive state water quality, stream and wetland permits under the National Environmental Policy Act.