In a public debate on how much use and emphasis there should be on oil/natural gas and particularly hydraulic fracturing (fracking), Colorado Gov. John Hickenlooper on Monday called natural gas the best transition for his state eventually to move to more reliance on efficiency and renewable energy programs. 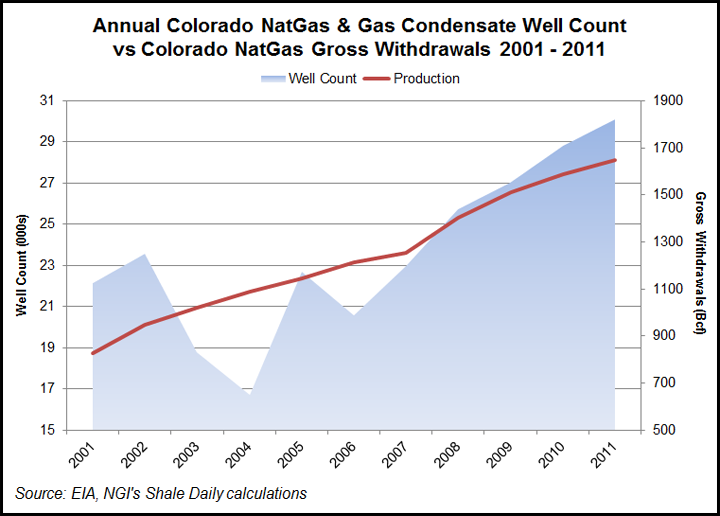 Hickenlooper was pitted against Boulder County Commissioner Elise Jones in a much-promoted debate at the University of Denver Law School.

Although some in the audience who shouted him down on a couple of occasions did not agree, Hickenlooper reiterated his often-made claim that Colorado has the “most comprehensive rules in the United States” related to oil/gas operations, including fracking practices.

Jones represents a county in which earlier this year she and her fellow elected officials extended for four months a drilling permit moratorium to June 10, noting they needed more time to hammer out local rules covering the activity over which the state claims to have exclusive jurisdiction (see Shale Daily, Jan. 30).

The production of natural gas has soared in the state over the last decade, according to Energy Information Administration data and NGI’s Shale Daily calculations. Colorado had 16,718 natural gas and gas condensate wells in operation in 2004 producing 1,090 Bcf. During 2011, the last year that full data was available, the state had 30,101 wells producing 1,649 Bcf.

Jones said that over the years, she and Hickenlooper normally have been on the same side of issues, but when it comes to oil/gas drilling and fracking “it is imperative that we get this right, and frankly there is still a lot of work to do.” The governor in his remarks emphasized a lot of the regulatory work already has been done in his state, including a 2011 law requiring a process for divulging the chemicals used in hydraulic fracturing (see Shale Daily, Dec. 14, 2011).

Noting the state has added other protections over the past three years, including a set of best practices for oil/gas operators, Hickenlooper said “natural gas is the best ideal transition fuel for [his state and nation’s] economy.” He cited increased use of natural gas in transportation as one of the examples of this.

Jones argued for stronger statewide protection, but only as what she called “a floor — not a ceiling,” from which local governments could and should write more stringent regulations. “Local governments should not have to bring lawsuits to get stricter protections for local schools, hospitals and homes,” she said. “We need to proceed with caution [on fracking] and not just frack first and ask questions afterward.”

While agreeing with some positive moves by the state, Jones argued against too much reliance on natural gas and not enough renewables being the principal replacement for coal-fired electric generation. While Hickenlooper defended a “more balanced approach” in the near term, Jones argued that there were climate change implications with all of the unquantified leaks of methane from increasing reliance on gas being transported throughout the state and nation.

With more coal-to-gas switching in the power sector in Colorado, Hickenlooper said there are reductions of 70%-80% in sulfur dioxide or nitrogen oxides. “People still vastly prefer renewables as the way to replace coal,” said Jones, adding that there is no accounting for the amounts of methane being leaked into the atmosphere. “We need a policy of zero-tolerance for methane leaks.”

Hickenlooper did not deny methane leaks as an issue, but he said the industry is addressing it in new ways to identify sources and capture the methane for productive uses.