Natural gas futures took a hit Thursday morning after the Energy Information Administration (EIA) reported a storage injection that was a greater than what traders were expecting. 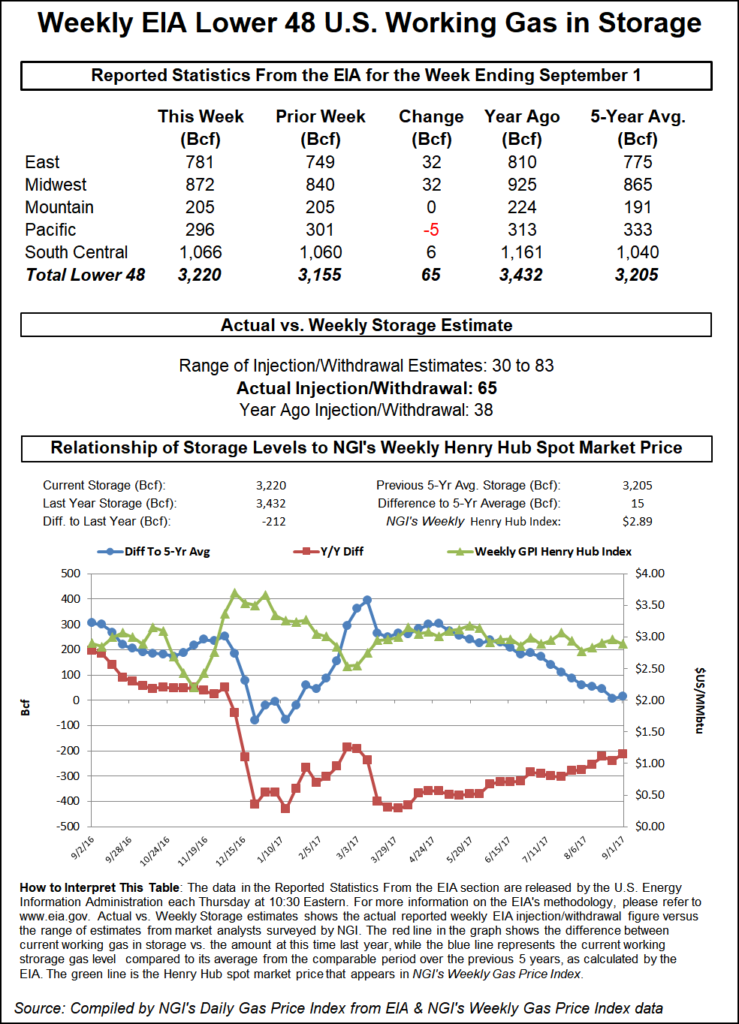 EIA reported a 51 Bcf storage injection in its 10:30 a.m. EDT release, about 10 Bcf greater than what traders and analysts were expecting, and outside of the consensus 30 Bcf to 48 Bcf injection range. October futures reached a low of $2.790 immediately after the figures were released, and by 10:45 a.m. September was trading at $2.809, down 7.8 cents from Wednesday’s settlement.

As bearish as the number was, traders were relatively unfazed. “You know, $2.79 is nothing. I think the market is in good shape,” a New York floor trader told NGI. “It’s OK. It just gave people a little opportunity to add a little more on.”

Others see it differently. “The initial reaction in price has been quite bearish, and we feel this print opens up a test of $2.76 into the weekend,” said Harrison NY-based Bespoke Weather Services following the number’s release.

“The 51 Bcf build in U.S. natural gas storage for last week was more than expected and a significant step up from the smaller than expected 11 Bcf refill in the prior week,” said Tim Evans of Citi Futures Perspective. “The gain was still less than the 68 Bcf five-year average rate and so does confirm a further tightening of the market on a seasonally adjusted basis, but the data implies a weaker overall balance in the market than had been thought.”

While injections and draws completely outside the range of expectations are infrequent, they do happen, according to Nathan Harrison, NGI markets analyst. “Since NGI began tracking these data in December 2013, expectations beat/misses have occurred 23 times. The Nymex futures response is generally pretty large on the day, but has ranged from $0.005 to $0.45 on an absolute basis. On average, these events tend to generate a move of about 9.1 cents in the prompt Nymex futures price on the regular session close of the day the news is priced in. The median of these events is a 6.4 cent move.”

Inventories now stand at 3,401 Bcf and are 238 Bcf greater than last year and 334 Bcf more than the five-year average. In the East Region 21 Bcf was injected, and the Midwest Region saw inventories increase by 29 Bcf. Stocks in the Mountain Region rose 3 Bcf, and the Pacific Region was unchanged, The South Central Region dropped 2 Bcf.

Salt cavern storage was down 5 Bcf at 287 Bcf, while the non-salt cavern figure was higher by 4 Bcf at 883 Bcf.