After 12 straight days of losses, natural gas futures bounced back in a big way Thursday as weather models shifted a bit colder for mid-October. Even after dipping into the red early in the session, the November Nymex gas futures contract settled 8.2 cents higher at $2.329/MMBtu. December rose 4.9 cents to $2.500. 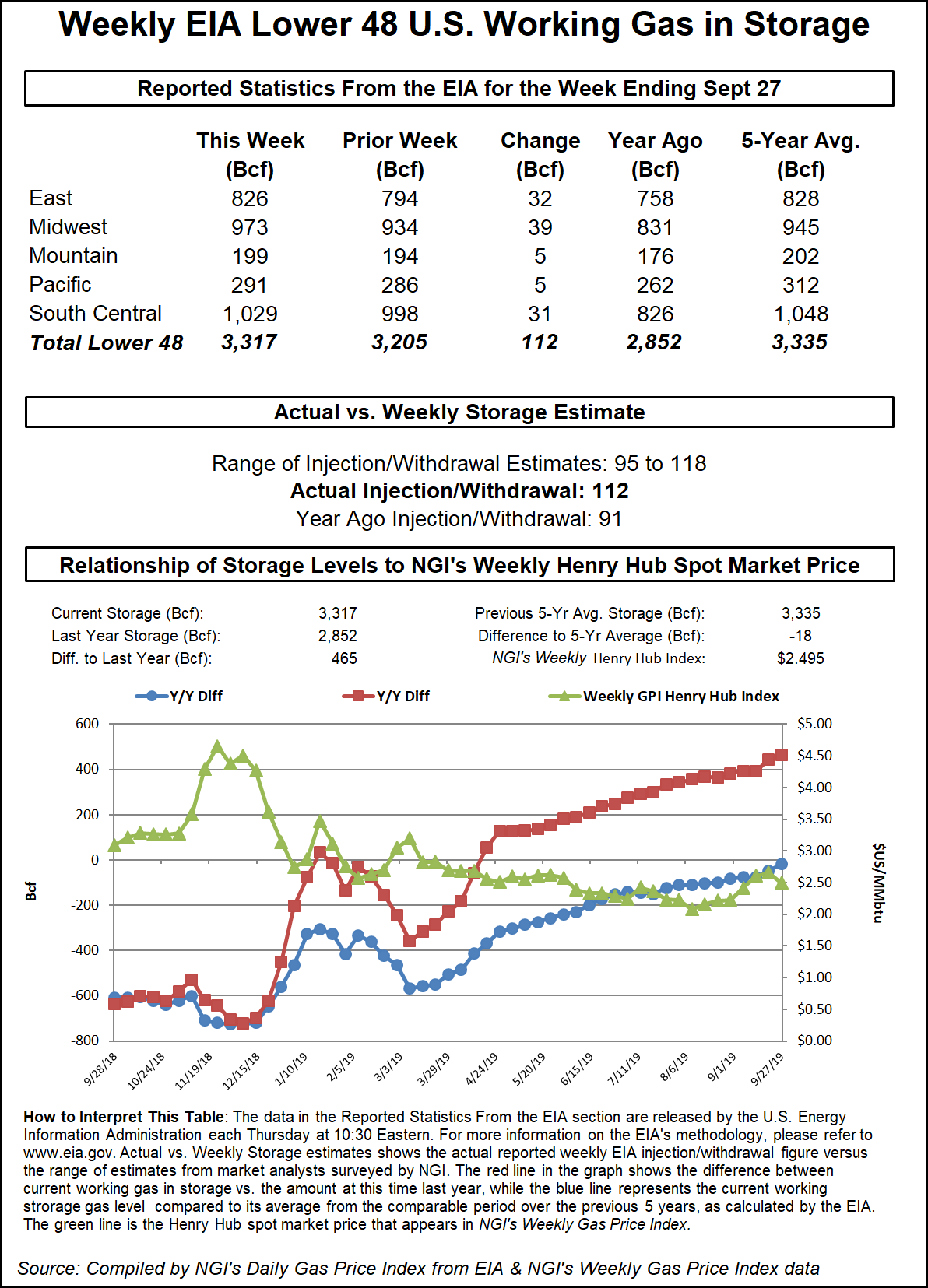 The significant upside seen in futures was even more surprising given the extreme weakness across cash markets. Led by a dramatic pullback in Appalachia and the Southeast, the NGI Spot Gas National Avg. fell 11.0 cents to $1.835.

Both the American and European weather models added demand overnight, particularly for mid-October. The midday Global Forecast System (GFS) model added a little more demand, predominantly across the northern and eastern United States Oct. 11-16 by favoring a weather system tracking through, according to NatGasWeather.

“The GFS wasn’t as cold with it late next week but did linger cool air over the East longer and where the data added several heating degree days (HDD) this run,” the weather forecaster said Thursday. “No change to our view as we still view the coming pattern as bearish leaning, but after two straight days of adding demand, natural gas prices have finally found support today.”

Meanwhile, Thursday’s storage report appeared to have little bearing on prices. The Energy Information Administration (EIA) reported a 112 Bcf injection into storage inventories for the week ending Sept. 27, coming in on the high side of estimates and prompting some choppy trading in the half-hour after the data was released.

The reported build compared with expectations ranging from 95 Bcf to a 118 Bcf build, and it was far above both last year’s 91 Bcf injection and the five-year average build for the week of 83 Bcf.

“Obviously, it’s very bearish versus history, but in reality, the market probably anticipated to see a larger figure. Therefore, not so terrifying, after all,” BlueGold Research analyst Adrian Bakker said.

Broken down by region, the Midwest reported the largest week/week injection of 39 Bcf, while the East added 32 Bcf, according to EIA. South Central inventories rose by 31 Bcf, including 13 Bcf into salt facilities and 19 Bcf into nonsalts.

Apparently, it was. With added demand in their back pocket, traders sent the November Nymex contract as high as $2.349 before settling two cents below that level.

Nevertheless, analysts wholeheartedly agree that there is more downside risk to prices in the coming weeks as production growth continues to overwhelm demand. Without sustained demand during that time, triple-digit injections could persist, and material HDD accumulation would be delayed until November, according to Mobius Risk Group. As a result, price elastic power demand and salt storage capacity holders would be relied upon to soak up excess supply.

Salt storage as of Sept. 27 was 40 Bcf ahead of last year, which importantly marked a six-year low, Mobius said. In order for salt storage to reach late 2016 highs, there would need to be 20 Bcf/week injected between now and the end of November. “For reference, this would equate to 80% of the peak weekly observation from the past nine years being replicated for 10 consecutive weeks.”

As a whole, storage stocks are on pace to exceed 500 Bcf above year-ago levels by the end of the month, and there appears to be little appetite to buy natural gas, the team at EBW Analytics Group said. The potential for more supportive weather forecasts to emerge in two to three weeks, along with weather-neutral fundamental improvements, could help firm support.

Until then, however, global weather patterns remain stuck in a phase that is generally correlated with warmer temperatures in the eastern half of the United States. This points to “the potential for further declines in the 30-45 day window as bearish market conditions return to the forefront,” EBW said.

After some swings the past couple of days in regional markets, widespread losses were seen Thursday as cooler weather was set to move into core demand centers of the country.

In parts of the Northeast, where multiple record highs were set earlier this week as the mercury climbed into the mid-90s, some areas could see their first frost of the season, according to AccuWeather.

“When comparing highs from the peak of the heat this week to the late-night and early-morning lows this weekend, some locations will experience a 50-degree-Fahrenheit swing,” AccuWeather senior meteorologist Alex Sosnowski said.

The main surge of crisp, fall air will come in the wake of a fast-moving storm system that brought rain and thunderstorms on Thursday. As that storm pulls away into Friday morning, “rain may mix with or change to a bit of snow over the mountains of northern New York state and New England,” Sosnowski said.

Cool and blustery weather will follow in the storm’s wake, with high temperatures on Friday likely to be in the 40s, 50s and 60s from north to south across the region, according to AccuWeather. Highs in the 70s will be confined to the Chesapeake Bay region.

As the sky remains clear and winds diminish at night, temperatures are expected to plummet to their lowest levels yet this season, the forecaster said. “Most outlying areas located north and west of the major metro areas will have a pretty decent chance of seeing the season’s first frost on Friday night.”

Meanwhile, Texas Eastern Transmission (aka Tetco) issued an update to its maintenance schedule that included dates assigned for inline inspection (ILI) tool runs and possible response/replacements dates for segments in M3 along the Northern Penn-Jersey Line, according to Genscape Inc. The 10% pressure restrictions from Perulack to Shermansdale Line 12 and Grantville to Bernville Line 19 have been lifted, and pipe replacements are rescheduled to begin on Oct. 10 and 11, respectively.

Furthermore, Delmont and Armagh Line 12 will have its ILI tool run on Dec. 17, with possible replacement dates on April 27, 2020. “There is a chance that winter capacity at Delmont may be returned to normal after the Dec. 17 tool run if positive results are found,” Genscape natural gas analyst Josh Garcia said.

Genscape cautioned, however, that these updates are ambiguous and may not actually translate to lifted restrictions. The main maintenance event that will constrain Delmont is for the segment between Delmont and Perulack Line 12, not Delmont to Armagh.

Furthermore, the lifted pressure restrictions from Perulack to Shermansdale and Grantville to Bernville did not correspond to tool runs in the listed maintenance or the segment capacity update, Genscape said. “It is possible that we will only be notified of lifted restrictions after the fact, or that the restrictions will last until pipe replacements are complete if negative results are found,” Garcia said.

Losses in the Midcontinent and Midwest were limited to around a dime, as were those throughout most of Texas.

Some markets out West posted moderate gains Thursday as chilly air lingers over the region. Kern River cash was up a nickel to $2.125, and SoCal Citygate cash was up 11 cents to $3.385.