A flood of proposed pipeline capacity along with liquefied natural gas (LNG) exports will spur demand toward convergence with booming supply between 2025 and 2030 and driving U.S. economic growth, several natural gas experts told an industry group in Chicago Monday. 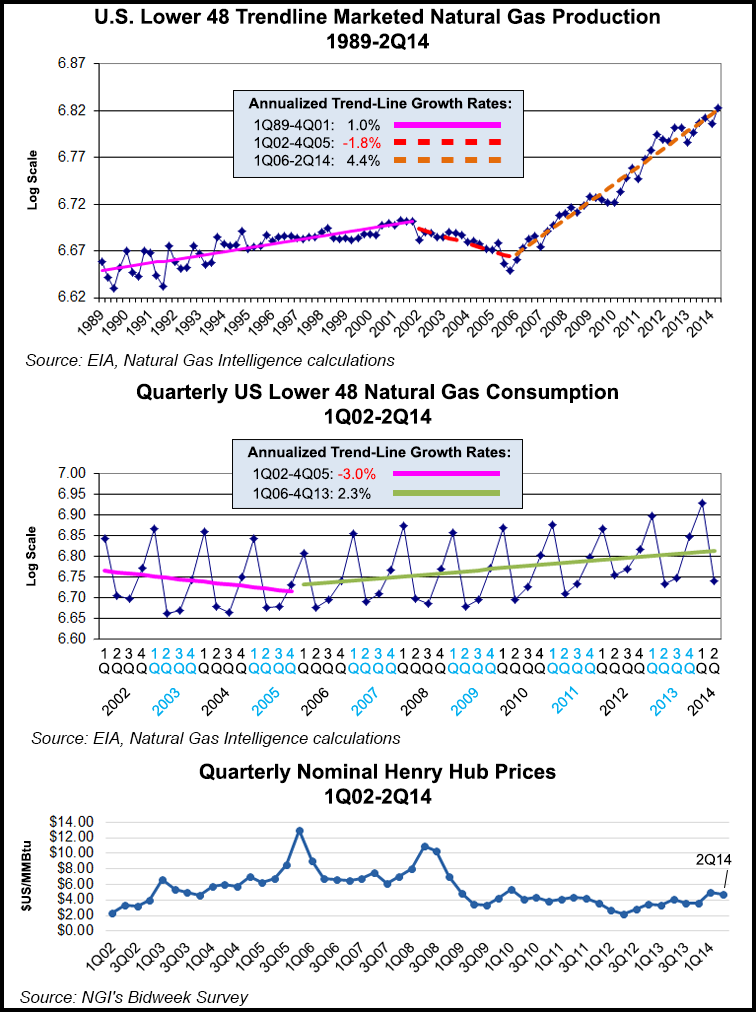 America’s Natural Gas Alliance (ANGA) Executive Vice President Frank Macchiarola painted a bullish picture for attendees at the LDC Gas Midcontinent Forum, characterizing the “shale revolution” — which created the need for his producer-driven trade association — as still being in the “infancy stage.”

There have been record levels of proposed U.S. pipeline projects, which amount to $18 billion in investments announced since May 1, according to Rick Smead, managing director at RBN Energy LLC’s consulting services.

And consumption will catch up with robust production by 2020, while liquefied natural gas (LNG) exports and power sector growth will continue into the following decade, said Patrick Rau, strategy and research director at Natural Gas Intelligence (NGI).

Rau made the case for the Haynesville Shale in East Texas/Louisiana, and others of what he called “ugly duckling” shales such as the Fayetteville and the Rockies, ending up being very sought-after supply sources if LNG exports top out around 10 Bcf/d, which his analyses point to, given the caveat that the pricing of future supplies remains a “big unknown.”

Without LNG exports at the 10 Bcf/d level, Rau thinks annual gas consumption increases could drop back to about 2.1%, but with the exports that he believes eventually will be driven into the global market, annual U.S. demand growth could reach 4.0%, just a shade below the 4.4% level of annual gas production growth in recent years.

In making his case for the Haynesville perhaps being a sleeping giant, given the prospects for robust LNG exports, Rau said those who see only a higher-cost, dry gas play are overlooking some significant positive factors: proximity to four major LNG export facilities; its scalable infrastructure is in place; production is in place; and one of the biggest players in the LNG sector, BG Group, is a major player in the Haynesville and it is involved in at least two of the export facilities.

“We expect them to be very active and involved there,” said Rau.

A driver for future annual consumption growth rates is the power sector, according to all of the panelists, and each had different scenarios on how the electric generation growth could pan out. Greg Hopper, a vice president with global energy consultants ICF International, laid out a “clean energy” power demand scenario in which increases in heat rates, efficiency, renewables and stability of existing nuclear power capabilities could influence the ultimate role natural gas will play.

Smead offered an analysis in which a “crossover” is reached between the continuing decline in coal’s percentage of U.S. generation and the continuing increase in gas’s share. He sees them both representing about 35% each in 2026.