While the pressure for non-carbon energy resources continues to grow in Oregon and other western states, the reality is that gas-fired generation is going to be needed in the years ahead, according to Portland General Electric (PGE) CEO Jim Piro. 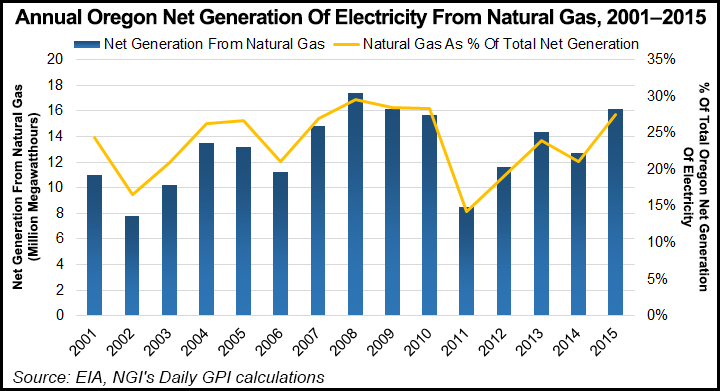 PGE recently started a gas-fired power plant adjacent to its coal-fired Boardman plant, which is slated to close in 2020. The baseload 440 MW Carty Generating Station opened in August after a long competitive process dating back to 2009 (see Daily GPI, Aug. 4).

During a 3Q2016 earnings conference call on Friday, Piro said the utility could pursue a second plant on the Carty site to boost its dispatchable capacity in response to increased reliance on renewables.

Noting that he worries about the reliability of the grid when he hears about proposals for 100% renewables by 2050, Piro said wind power in the Pacific Northwest is variable and tends to not be aligned with patterns of electricity use in the region.

“We’re going to have to continue to add firm capacity to balance out the variability,” he said. “We are spending a lot of time educating environmental groups and others on the need for more firm capacity.”

Piro is afraid of getting too “energy rich and capacity poor” on the grid, so he would like to reach the 50% renewables milestone and see how well that works before setting goals of up to 100% renewables.

“We joined the California [Independent System Operator] energy imbalance market [see Daily GPI, Oct. 14, 2015], but that is not a capacity market, it does not provide firm capacity, so you have to go to that market balanced and resource sufficient, and we’ll need more capacity to do that, which is the discussion in our current integrated resource plan revision talks,” Piro said. “The need [for more capacity] is there if we are going to assure reliable service to our customers.”

Piro said PGE is looking to propose a utility-built new resource option that would develop a Carty II gas-fired plant. “The Carty existing site has infrastructure and land availability to do this, and is clearly an option, although I suspect like with Carty I, we would first make the site available for a bid by a third-party developer,” he said.

He cautioned that none of the decisions on a new gas-fired generation plant have been made yet.

“To us, this is a very attractive site, as it is available and has a lot of the attributes we would be looking for; it has transmission, substations, etc.. But whether we self-build or let it go open to others is yet to be decided,” Piro said.

Separately, PGE is bidding to make another commitment in the natural gas sector with a proposed ratepayer investment in future gas reserves that the Oregon Public Utility Commission (PUC) is set to decide on Nov. 4. Piro suspects the state regulators will rule thumbs up or down on this proposal, and there won’t be alternatives.

“If the PUC approves the transaction, we will move forward with the counterparties to invest in gas reserves and take action to acquire the reserves,” he said. “If the commission doesn’t think a long-term hedge for our customers is appropriate, then we would unwind the transaction and not pursue it. It is really either ‘A’ or ‘B,’ and in this case there is no ‘C’.”