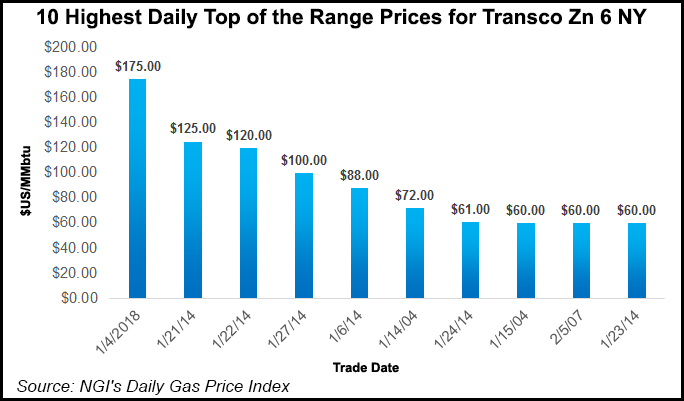 Meanwhile, the futures market took the recent weather-driven cash surge as a fleeting concern, focusing instead on forecasts for warmer days ahead and an Energy Information Administration (EIA) storage report that fell short of expectations. The prompt-month sold off following the report, tumbling 12.8 cents to settle at $2.880. March dropped 11.8 cents to settle at $2.813.

After spiking Wednesday ahead of forecast winter precipitation across the Mid-Atlantic and Northeast, points across the region surged even higher Thursday. Transco Zone 6 New York averaged $140.06, a whopping $91.68 day/day increase.

The conditions driving Thursday’s exorbitant cash prices appeared to be a perfect storm of widespread weather-driven demand and pipeline constraints.

A Northeast trader told NGI competing demand further south along Transco Zone 5 — where prices averaged $127.57, up $76.64 on the day — drove up spot prices in the New York area.

The $175 gas reported at Transco Zone 6 New York would set a record high at the point, according to Daily GPI historical data, easily toppling the previous high of $125 set during the polar vortex-influenced winter of 2013/14.

A powerful, fast-developing storm — dubbed a “bomb cyclone” — struck the East Coast overnight, and weather outlets were reporting blizzard conditions across the Mid-Atlantic and Northeast Thursday, including strong winds and heavy snowfall in population centers like Boston and New York.

The storm was already causing power outages and disrupting travel by Thursday afternoon.

“Meanwhile, in the wake of the storm, an area of cold high pressure will move southward out of Central Canada into the Upper Mississippi Valley on Thursday into Friday. The cold air and upper-level energy will move over the Lakes producing lake effect snow downwind from the Great Lakes through Saturday,” NWS said.

Forecasters were calling for the mercury to drop following the storm.

Wunderground.com was calling for lows in Boston Friday to fall into the negatives, accompanied by strong winds. AccuWeather forecast lows in the single digits in New York Friday with wind gusts as strong as 41 mph and a “realfeel” temperature of -22 by nighttime.

Amid elevated demand, production freeze-offs have also been an ongoing concern.

While pipeline operators have been struggling to keep their systems in check since arctic air settled in over a wide swath of the country during the Christmas holiday, exploration and production (E&P) companies working across Ohio, Pennsylvania and West Virginia have had crews on call to keep the gas flowing.

In Texas, where lows have dropped below freezing during the recent Arctic blast, Genscape Inc. reported production freeze-offs impacting about 1.2 Bcf/d of Permian Basin production month-to-date versus the previous two-week average.

“The lion’s share of that drop — nearly 75% — has occurred on El Paso, which typically represents about 60% of Permian supply. El Paso’s production supply from Permian locations has dropped 935 MMcf/d over the first four days of January, dropping from 2,315 MMcf/d over the previous two weeks to 1,380 MMcf/d, according to Genscape.

Outside the East Coast, cash prices continued to moderate Thursday from elevated levels set earlier in the week. Henry Hub dropped $2.46 to average $4.42.

Temperatures were expected to remain cold in Chicago Friday, with some lows in the negatives, before warming up into the 20s and 30s by Sunday, according to AccuWeather.

Midwest prices eased off for the most part Thursday, with the regional average falling 41 cents to $5.80, though prices at Joliet moved higher, adding 47 cents to average $6.91.

ANR Pipeline Co. had an “extreme condition” declaration in effect for its Market Area through at least Saturday. The pipeline issued multiple weather-related alerts to shippers Wednesday affecting Thursday’s gas day, including notification of possible underperformance at its Bobcat storage facility in Louisiana.

“The large storage facility at Union Dawn has seen drawdowns for the month of January shoot up to an average 3.8 Bcf/d after only drawing on average 1.2 Bcf/d during December,” Larsen said. “These additional volumes have been moving to Parkway and Enbridge this week as deliveries to Union South Markets have jumped by almost 450 MMcf/d” month-to-date.

In stark contrast to the buying along the East Coast, futures pulled back Thursday on a disappointing storage number and long-range warm risks in the weather outlook.

EIA’s first storage inventory report covering the recent Arctic cold missed to the bearish side of consensus estimates, and prompt-month futures pulled back on the news. EIA reported a net 206 Bcf withdrawal from U.S. gas stocks for the week ended Dec. 29, about 15 Bcf less than what the market had been expecting, and the bears, perhaps skeptical of the lasting impact of the recent cold, seemed to take it as validation.

The February contract had climbed above $3.030 Thursday but retreated sharply when the report hit trading desks at 10:30 a.m. EDT, trading around $2.985-3.005. By 11 a.m. EDT, February was hovering right around $3, near even with Wednesday’s settlement.

This week’s storage report was the first to gauge the impact of the extreme frigid temperatures that began moving in over the Christmas holiday, driving up heating demand and cash prices for most of the eastern two-thirds of the Lower 48 states.

Prior to the release of the final number, market predictions had been pointing to a withdrawal well above 200 Bcf. The average from a Reuters survey of traders and analysts had EIA reporting a 221 Bcf withdrawal from U.S. gas stocks, with responses ranging from -205 Bcf to -243 Bcf.

PointLogic Energy had been calling for EIA to report a 220 Bcf withdrawal, while Stephen Smith Energy Associates had called for a withdrawal of 227 Bcf. IAF Advisors analyst Kyle Cooper had predicted a withdrawal of 211 Bcf.

“This was the first print with the recent cold snap featured prominently, yet the Christmas holiday clearly limited the demand aspect of this impressive cold,” Bespoke Weather Services said. “…With risks of a warmer second half of January on the horizon, we would need to see bullish EIA surprises to really keep prices bid up, and instead we saw further complacency justified with this slight miss.”

As for upcoming reports, analysts with Wells Fargo Securities LLC said they’re forecasting a cumulative 565 Bcf withdrawal over the next two weeks based on internal models and government forecasts.

Total working gas in underground storage as of Dec. 29 stood at 3,126 Bcf.

The Mountain region saw 12 Bcf withdrawn from inventories, while 13 Bcf was withdrawn in the Pacific, according to EIA.

“We saw prices crash through our $2.92 support level, which we now see as providing resistance into the end of the week, and are looking for further downside as the market realizes the full extent of demand destruction that we can expect from both a medium-term and longer-term warmer spell,” Bespoke said.

“We lost a number of gas-weighted degree days again” in Thursday’s weather data “and expect to continue losing some in forecasts into the weekend as well, potentially forcing longs out of the market ahead of a weekend where weather risks are almost certainly skewed bearish.”

After “four significant days up, we’re moving towards the end of this current blast of weather” with reports calling for temperatures to moderate from extremes in the coming days, Thompson said. “Where we are at the cycle in this particular weather pattern, it’s not too surprising that we sold off the way we did.”