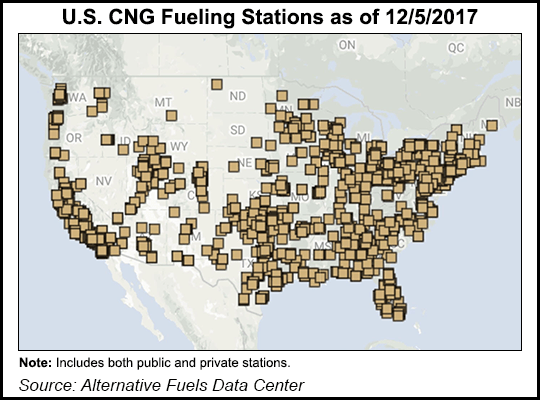 NGVAmerica, the Renewable Natural Gas (RNG) Coalition and Clean Energy Fuels Corp. expressed support for the proposed standards. However, the Heavy-Duty Leadership Group, which includes many large global fleet operators, urged EPA in oral testimony Monday not to eliminate the glider kit provision, which encourages the use of “cleaner” engines and fuels in the heavy-duty vehicle sector, including NGVs.

NGVAmerica President Daniel Gage said the trade group has supported the phase two changes, but it asked for flexibility for small businesses that sell glider trucks with alternative fuel systems like natural gas and reduce emissions.

Likewise, RNG Coalition Executive Director Johannes Escudero supported the so-called renewable volume obligation (RVO) of 288 million gallons for cellulosic biofuels in 2018, noting that it represents an increase from the proposed RVO that would allow the RNG sector to continue to grow.

“Last week the U.S. EPA upheld its commitment to the RFS, and particularly RNG, thereby giving the market a clear sign of confidence that will result in its continued growth,” said Clean Energy Fuels CEO Andrew Littlefair. The company’s Redeem RNG brand sold 75 million gallons this year, versus 13 million in 2013.

More than $1.1 million in grants were awarded this year for vehicles and fueling infrastructure in Pennsylvania under the AFIG program for compressed natural gas (CNG) and various other alternative fuel vehicles.

In Mexico, NGV buses are being introduced, with a global conference, AltFuels Mexico 2018, scheduled for April 23-26. Mexico is the home to several gas and alternative transportation initiatives, including by Nuevo Leon-based EGS Trucks, which is working to convert a fleet of CNG-fueled trash-hauling trucks. EGS, which distributes products of China-based Anhui Aukai Automobile Co. Ltd., has been involved in introducing CNG buses in Monterrey.

Meanwhile, Toyota announced Monday that it is going to produce hydrogen to fuel nearly 1,500 vehicles a day. Toyota Motor North America Inc. plans to build a hydrogen fueling station to support operations in the Port of Long Beach, CA, to develop what it said would be the world’s first “megawatt-scale carbonate fuel cell power generation plant.

Toyota’s Tri-Gen facility would use bio-waste sourced from agricultural waste to generate water, electricity and hydrogen. The power plant is scheduled to come online in 2020, generating about 2.35 MW/day and 1.2 tons of hydrogen/day.

The power generation facility would be 100% renewable, the first such company facility in North America, a spokesperson said.

Rolls-Royce also has announced advances in the use of liquefied natural gas (LNG) in marine transportation, unveiling the Crystal Blue yacht and Blue Shadow support vessel.