Estimated U.S. energy consumption in coming decades doesn’t vary much among a series of long-term projections released Thursday by the Energy Information Administration (EIA), but the fuel mix indicated in those cases would differ, and natural gas is likely to consolidate and even grow its share of the market, the agency said. 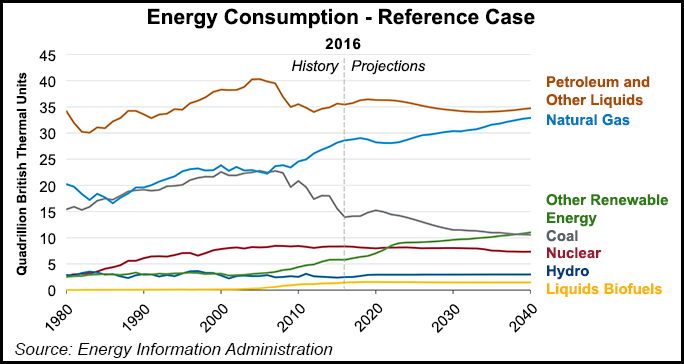 “Natural gas production, we think, is actually going to go up quite a bit, with relatively low and stable prices, so that’s going to support higher levels of domestic consumption, especially in the electric power and industrial sectors, where we think there will be quite a bit of natural gas use,” EIA Administrator Adam Sieminski said in Washington, DC.

Included in EIA’s Annual Energy Outlook 2017 (AEO2017) are energy projections through 2040 under a reference case, a high oil price case, a high and low oil and gas resource and technology cases, high and low economic growth cases, and a case assuming that the Clean Power Plan (CPP) is not implemented.

Natural gas prices rise “modestly” in the reference case from 2020 to 2030 as electric power consumption increases, and stay relatively flat after 2030 as technology improvements keep pace with rising demand.

“The United States becomes a net energy exporter in most AEO2017 cases as petroleum liquid imports fall and natural gas exports rise.” EIA said. “Exports are highest, and grow throughout the projection period, in the high oil and gas resource and technology case, because favorable geology and technological developments result in the production of oil and natural gas at lower costs.”

“We’re going to have fairly strong domestic production of energy, and relatively flat demand,” Sieminski said. “You put those two together and it implies that the U.S. could become a net energy exporter over the projection period in most of our cases…even in the reference case, we’re a net exporter of energy, largely because of what’s happening in the natural gas area.”

In the reference case, gas production is projected to grow at a nearly 4% annual average through 2020, about the same as it has since 2005. Beyond 2020, gas production in the reference case is projected to grow at a 1% annual average as net export growth moderates, domestic natural gas use becomes more efficient, and prices slowly rise. At the same time, rising prices are expected to be moderated by assumed advances in oil and gas extraction technologies, EIA said.

“Production from shale gas and associated gas from tight oil plays is the largest contributor to natural gas production growth, accounting for nearly two-thirds of total U.S. production by 2040 in the reference case,” EIA said. The reference case also shows tight gas production’s share of the domestic natural gas supply falling in the late 2020s as a result of growing development of shale gas — especially the Marcellus and Utica plays — and tight oil plays. In addition, as new discoveries offset declines in legacy fields, offshore gas production is likely to increase over the projection period.

And, while U.S. gas consumption is expected to decrease in the near term, every case but one — the Low Oil and Gas Resource and Technology case — indicate that it will increase during much of the projection period.

The industrial sector would be the largest consumer of natural gas during most years in the reference case projections and, after a brief near-term decline attributable to strong growth in renewables generation and price competition with coal, natural gas used for electric power generation generally increases after 2020. “In particular, the Clean Power Plan and the scheduled expiration of renewable tax credits in the mid- 2020s result in an increase in the electric power sector’s natural gas use,” EIA said. Natural gas consumption in the electric power sector in 2040 would be about 6% higher in the reference case than in the No CPP case. Gas consumption in the residential and commercial sectors remains largely flat through the course of the reference case.