Natural gas and power markets are ‘cautiously optimistic’ as they approach the upcoming winter, according to the 2016-2017 Winter Energy Market Assessment released Thursday by FERC’s Office of Enforcement (OE). 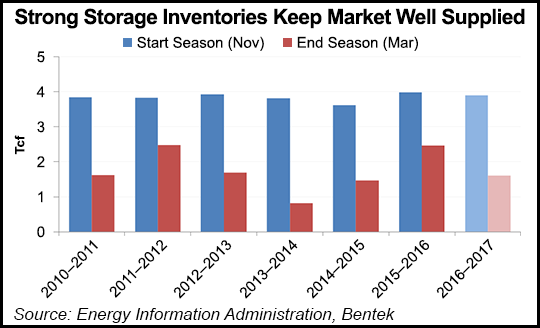 “Natural gas and power markets are well supplied going into the winter, with plentiful storage, a better-connected pipeline system, and the ability to draw greater imports from Canada through pipelines and higher imports of LNG [liquefied natural gas] into New England,” according to the report.

“However, U.S. natural gas production is down slightly from last year, and prices are likely to be moderately higher than last winter. Most forecasters expect winter temperatures across the northern U.S. to be average, while most sectors of the gas market should see strong demand relative to last year’s record warm winter.”

Total U.S. demand for natural gas could increase by more than 5 Bcf/d compared with last winter, which was exceptionally mild, OE said. Residential, commercial, and industrial demand for natural gas are all likely to increase this winter compared with last, and exports to Mexico on pipelines and to international markets in the form of LNG should increase as well, according to OE’s assessment. “The only sector likely to see a decrease in demand is in power generation, which could fall nearly 2 Bcf/d from last winter, as higher natural gas prices make other generation fuels more economical, especially during times of large natural gas price spikes,” OE said.

Despite its optimism for the coming winter, OE said there are challenges, “specifically in regional markets like New England and California, where operational issues could create some regionalized gas and power risk.”

In New England, winter price volatility should be limited by new pipeline capacity, OE said. “The pipeline expansions and additions include Spectra’s Algonquin Incremental Market, which will add about 350 MMcf/d of new transport capacity into the greater Boston and Massachusetts market [see Daily GPI, Oct. 10]. The added capacity should help mitigate the worst price spikes.”

ISO-New England’s Peter Brandien, vice president operations, told FERC that the region remains dependent on LNG. “The issue is that as the temperature goes down, the gas that’s available to generators gets less and less, and actually the gas LDC load takes off, and that’s where the LNG injections into the region are very important…LNG is critical to our operations.”

In California, the winter worry is the closure of the Aliso Canyon natural gas storage field (see Daily GPI, Oct. 19). “Low storage levels leave the region susceptible to upstream supply issues like freeze-offs or major pipeline operation problems,” OE said. “State regulators have said the prices in the region should be stable without additional capability from Aliso Canyon given normal winter conditions, but may face up to a 1 Bcf/d shortage if winter weather reachers extremes, potentially causing price dislocations.”

Nancy Traweek, executive director systems operations at the California Independent System Operator, said it is still uncertain whether Aliso Canyon will be available this winter.

“Because winter is our lower demand season, that allows us more flexibility to move our resources outside of the SoCalGas area into other parts of our system, so that does provide us flexibility,” Traweek told FERC. “In our assessment, what we did was study what the lowest level of gas burden is we can have, pre-contingency and post-contingency. It’s a very low number, it’s not certainly an economic number, and it wasn’t something we’d want to maintain for a significant amount of time, but we do know we can get to a very low gas burn if required.”

Traweek, Brandien, and representatives from PJM, New York Independent System Operator, Midcontinent ISO, and Southwest Power Pool all told FERC that they feel comfortable that they will be able to meet demand and reliability requirements this winter.

“Gas storage levels have remained above the five-year average throughout the summer, after beginning the traditional refill season at record high levels at the end of last winter…consequently, the market is likely to remain well supplied throughout this winter,” OE said.

In a winter outlook released Thursday, the National Oceanic and Atmospheric Administration’s (NOAA) Climate Prediction Center said a La Nina event expected to develop in late fall or early winter could bring drier, warmer winter weather to the southern United States and wetter, cooler conditions to the nation’s northern tier, from Montana to western Michigan. “The rest of the country falls into the ‘equal chance’ category, meaning that there is not a strong enough climate signal in these areas to shift the odds, so they have an equal chance for above-, near-, or below-normal temperatures and/or precipitation,” NOAA said.

The upcoming winter could be an extended one from the northern Plains to the natural gas-hungry population centers of the eastern United States, with cold and snowy conditions stretching into the spring, while the southern half of the nation is expected to be relatively mild and dry, according to a recent long-term forecast issued by AccuWeather (see Daily GPI, Sept. 29).

Temperatures this winter are expected to average 3% warmer than the 10-year average, but 15% colder than last winter, which was exceptionally warm, Energy Information Administration (EIA) head Adam Sieminski said earlier this month (see Daily GPI, Oct. 13). Those colder temperatures will lead to higher demand for space-heating fuels, compared to winter 2015-2016, but fuel demand will still be 2-3% lower than average, and while prices for all fuels are forecast to be higher than last winter, heating oil and propane prices are forecast to be “significantly below the average of the previous five winters,” Sieminski said.

A winter expected to be 12% colder than last year’s and increased industrial demand have brightened the prospects for natural gas producers heading into the official start of winter at the end of the month, according to the Natural Gas Supply Association (see Daily GPI, Oct. 5). Because of colder weather and growth in demand for natural gas, the producer association anticipates upward pressure on prices compared to last winter.