For the first time ever, the average capacity factor of natural gas combined-cycle power plants in the United States exceeded that of coal steam plants in 2015, according to a note published Monday by the Energy Information Administration (EIA). 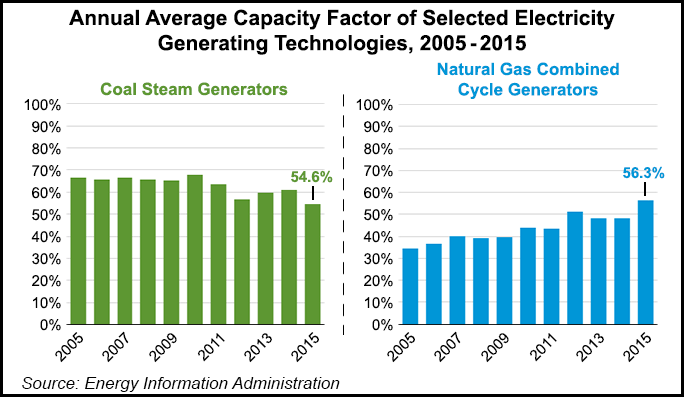 “The mix of energy sources used in U.S. electricity generation has changed dramatically over the past few years,” EIA said. “This change is particularly evident in the shift from the use of coal to natural gas for power generation. The industry has been building new natural gas capacity and retiring coal plants, but another important factor behind the changing generation mix is the day-to-day pattern of how existing power plants are used.”

Capacity factors measure how much of a power plant’s maximum generating output is being used.

“Coal steam power plants require more energy input per MWh of generation than” combined-cycle plants, the agency added. “Yet, the low cost of coal relative to natural gas until recent years favored the use of coal-fired generating units to fulfill baseload electricity demand…Nearly half of all coal plants ran at capacity factors above 70% in 2005. Since 2012, coal plants have faced much more competition from natural gas combined-cycle units for supplying baseload demand. In 2015, less than one-fifth of all coal plants operated at capacity factors higher than 70%.”

Over the past few years, cheap natural gas has been cutting into coal’s previously dominant share of U.S. electric generation. After surpassing coal for the first time ever on a month-to-month basis in 2015 (see Daily GPI, Dec. 28, 2015; Dec. 2, 2015; Oct. 28, 2015), EIA said recently it expects natural gas to fuel the largest share of U.S. electric generation for full-year 2016 (see Daily GPI, March 16).