Spot gas for delivery Friday eased lower in Thursday’s trading as most traders attempted to get deals done ahead of the Energy Information Administration (EIA) 10:30 a.m. EDT release of storage data for the week ending July 10. 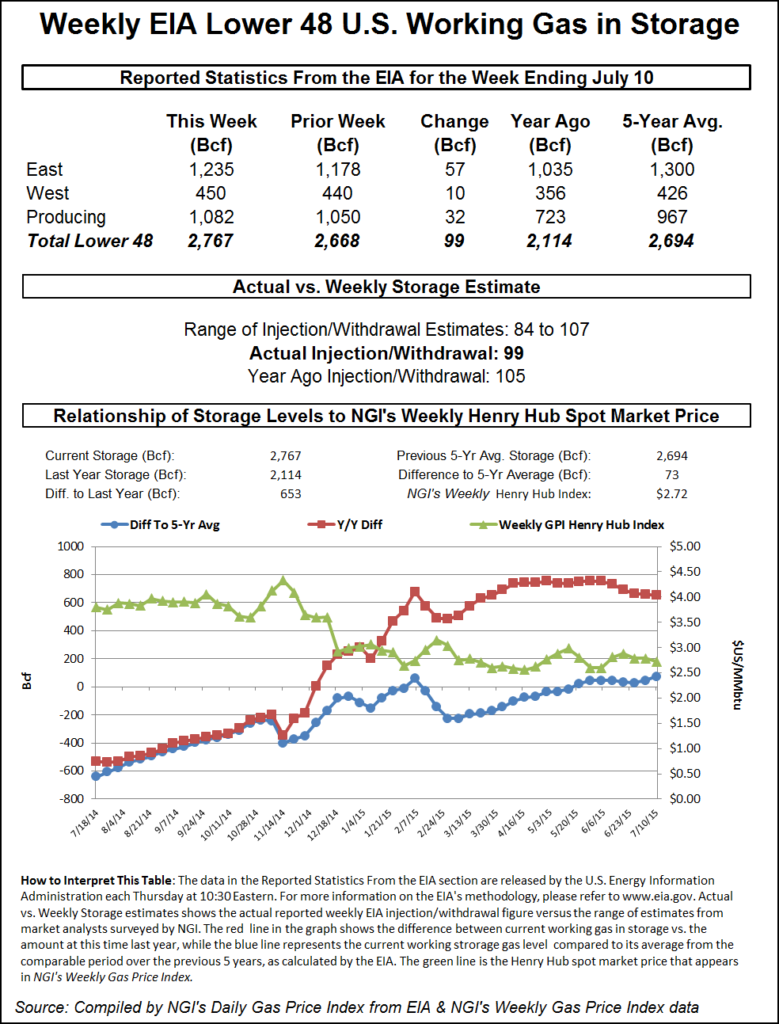 Gains in the Marcellus were largely offset by broad declines in the Gulf Coast, Midcontinent and Midwest. Overall, the market gave up 2 cents to $2.59. Futures subsided after the EIA reported a greater-than-expected 99 Bcf build, but bulls may have the last laugh. Spot futures now stand 13 cents higher than a week ago following two successive bearish inventory reports. At the close, August had retreated 6.4 cents to $2.854 and September was down 5.6 cents to $2.853. August crude oil fell 50 cents to $50.91/bbl.

The widely forecast heat episode may be starting to arrive, at least in the nation’s midsection. Chicago’s Thursday high of 73 was forecast to reach 91 Friday and 92 Sunday, according to forecaster Wunderground.com. The seasonal high in Chicago is 85. Dallas’ 96 high Thursday was expected to reach 98 Friday and 99 Saturday, 4 degrees above normal.

New York City on the other hand was predicted to see its Thursday high of 84 slump to 80 by Friday and climb to 88 Saturday. The seasonal high in New York is 84

Futures traders saw the day’s decline consistent with the above-expectations 99 Bcf storage injection. “The market thought about it and said, ‘You know what? We’re still putting some good injections in here. Maybe we should come off,'” a New York floor trader said.

Last year 105 Bcf was injected and the five-year pace stands at 71 Bcf. Analysts at IAF Advisors calculated a 96 Bcf increase and ICAP Energy expected a 90 Bcf build. A Reuters survey of 27 traders and analysts revealed an average 95 Bcf with a range of 84 Bcf to 107 Bcf.

The market may be close to a new trading paradigm. Traders have long targeted $3 as what could be the beginning of a move higher, possibly substantially higher, and “if we settle a couple of days above $3, that might be enough to convince people that we might want to be trading above there,” a trader said.

Analysts suggest this might be just a speed bump to higher prices once warm weather hits. “The 99 Bcf in net injections for last week was somewhat more than expected, short-term bearish for prices,” said Tim Evans of Citi Futures Perspective. “This will test whether the market can withstand a minor disappointment and move higher, based on the warmer than normal temperature forecast.”

It seems analysts can’t get a break. Just as last week’s storage build at 91 Bcf caught a lot of analysts short by about 5 Bcf, this week’s report was causing some head-scratching as well. John Sodergreen, editor of Energy Metro Desk, said, “Last week we noted that the spread between the three categories we track [banks, individuals and surveys] was only 1.4 Bcf, so, no indication of a surprise. This week it’s elevated a bit to 2.3, but still below the 3 Bcf threshold. By rights, we shouldn’t see a surprise this week, but history is at odds with that point.

Near-term weather forecasts still continue to trend warmer. WSI Corp. in its morning six- to 10-day forecast said, “[Thursday’s] six-10 day period forecast is a little warmer than yesterday’s forecast over the south-central and eastern U.S. The West and Northern Plains are cooler. As a result, PWCDDs are up another 1.9 to 63.1 for the CONUS. Forecast confidence levels is average today as medium-range models are in reasonably good agreement. Uncertainty with tropical activity over the Pacific Basins still hampers confidence levels a bit.

“There aren’t many upside risks to the forecast today. Most of the heat over the southern U.S. is at the top of the model suite,so the risk is not quite as hot. The West, especially the Pacific Northwest and the Northeast have a risk to the cooler side.”