Maine Gov. Paul LePage is urging legislators to tackle the state’s energy challenges, with an emphasis on lowering residential heating bills, and natural gas, which has found Maine a hard market to crack. 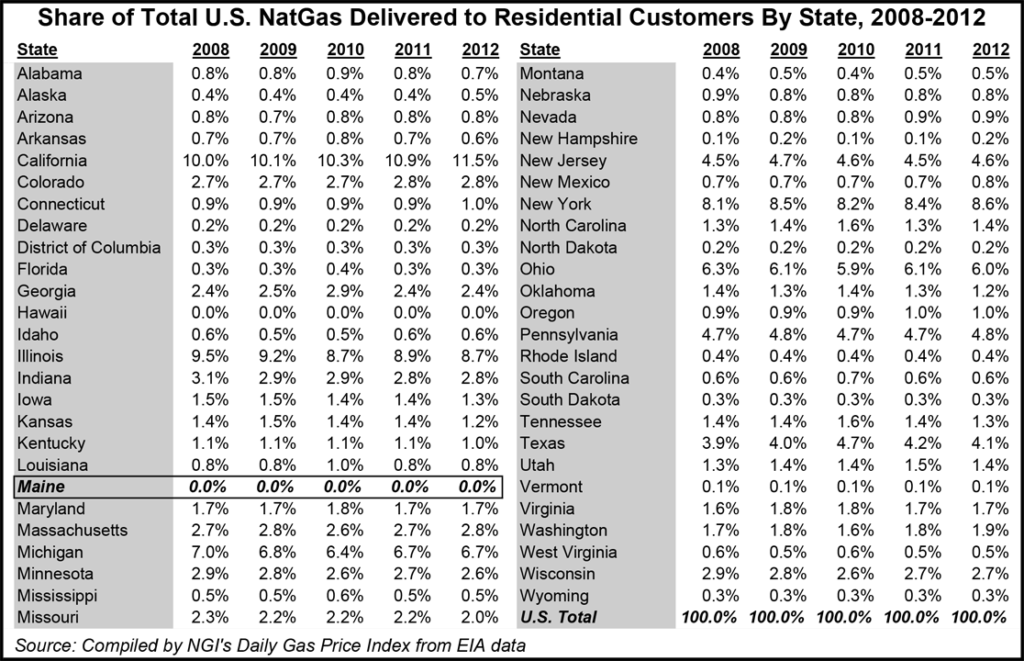 Wholesale electricity prices in New England were up 57% in 2013 compared to 2012; the price of propane has jumped 22% since the heating season began in October; and the 70% of Maine households that use heating oil can expect to spend $3,200 on that fuel this winter, according to LePage.

“Our energy prices are becoming more expensive for businesses competing across the world and the Maine people are spending more of their disposable income on energy,” LePage said in a letter to legislative leaders Tuesday.

His administration’s energy policy is based on two fundamental objectives, he said: lower the price of energy for businesses and invest in affordable heating options, including heat pumps, natural gas, wood pellets and other advanced systems. The state’s focus on streamlining wind development “that is almost completely contracted with southern New England states…is not helping Maine lower electricity prices or assisting Mainers with their high heating costs,” according to LePage.

“My administration is making progress on a regional effort to increase our access to natural gas and hydropower to bring additional competition to lower costs. On a parallel track, we must amend our state laws to lower energy costs.”

LePage recently joined with five other New England governors in committing to work together with the Independent System Operator of New England to advance an energy infrastructure initiative that diversifies the region’s energy supply portfolio while ensuring that the benefits and costs of transmission and pipeline investments “are shared appropriately” (see Daily GPI, Dec. 6, 2013).

The Northeast has become heavily gas-reliant and preliminary estimates call for the region to replace as much as 6.2-9.8 GW of coal-fired capacity with gas by 2015. But the region’s geology doesn’t lend itself to market-area underground storage for peak-shaving like that maintained by both pipelines and distribution companies around most major population centers. And the region is burdened by the heavy cost of construction of new peak supply pipelines into the area, which could run at very low levels during much of the year.

The first natural gas pipeline ever to reach the state’s capital, which runs from the Maritimes and Northeast pipeline tap in Windsor, ME, was completed just last October (see Daily GPI, Oct. 25, 2013). Maine Natural Gas, which began that $23 million backbone in March 2013, has been skirmishing for some time with Summit Natural Gas of Maine for natural gas customers in Augusta and the surrounding Kennebec Valley (see Daily GPI, March 11, 2013; Jan. 14, 2013; Aug. 23, 2012; Oct. 18, 2012). In November, Summit announced plans for a phase two build-out of its $350 million Kennebec Valley transmission and distribution project and a $110 million expansion that will extend gas service to several towns in the southern part of the state (see Daily GPI, Nov. 26, 2013).

Maine last year adopted an omnibus energy bill (LD 1442) that would increase the state’s gas pipeline capacity. The bill, which was adopted by both the Maine House and Senate, was vetoed by LePage, but legislators overruled that veto.