While some Lower 48 plays are expected to see natural gas production trend upward over the next month, overall output from seven key U.S. regions is set to decline from April to May, according to updated figures released Monday by the U.S. Energy Information Administration (EIA). 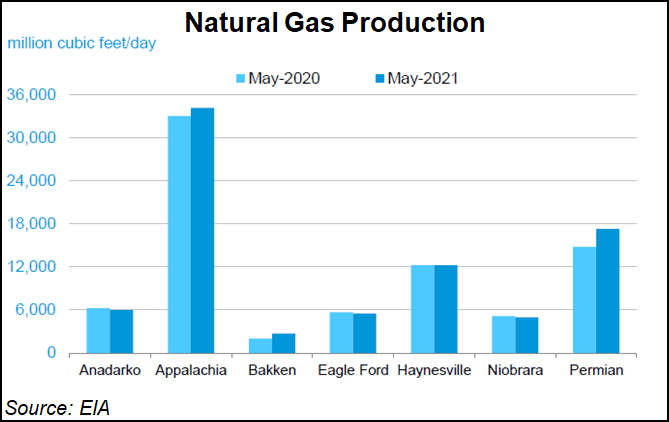 Total output from the seven regions — the Anadarko, Appalachia and Permian basins, as well as the Bakken, Eagle Ford, Haynesville shales and Niobrara formation — is expected to fall by 149 MMcf/d month/month to 82.783 Bcf/d in May, EIA said in its latest Drilling Productivity Report (DPR).

That would include rising output from the Haynesville (up an estimated 104 MMcf/d from April to May) and the Permian (up 61 MMcf/d), with declines expected from the Anadarko (down 124 MMcf/d), Appalachia (down 65 MMcf/d), Bakken (down 45 MMcf/d), Eagle Ford (down 18 MMcf/d) and Niobrara (down 62 MMcf/d), according to EIA.

The total number of drilled but uncompleted wells (DUC) across the seven regions declined by 177 to 6,912 from February to March, EIA said. The Permian saw the largest drawdown of its DUC backlog during the period, dropping 56 units to stand at 3,163 DUC as of March. The Niobrara drew down the second most DUC at 39, dropping its total to 481.

Oil production from the seven plays, meanwhile, is set to increase slightly overall from April to May, rising by 13,000 b/d to slightly more than 7.6 million b/d. This comes as Permian output, projected to grow by 52,000 b/d from April to May, is expected to overshadow declines from other plays. The Anadarko (down 10,000 b/d), Bakken (down 12,000 b/d), Eagle Ford (down 9,000 b/d) and Niobrara (down 9,000 b/d) are all set to see output decline during the period, according to the DPR data.

New well oil production per rig is set to decline by 3 b/d on average from April to May across the seven regions. Notable projected changes include a 23 b/d increase in production per new rig in the Eagle Ford and a 13 b/d decrease in the Permian.