Natural gas and oil production in the nation’s seven most prolific onshore unconventional plays is expected to continue an upward trend next month that has been in effect for most of the year, according to data from the Energy Information Administration (EIA). 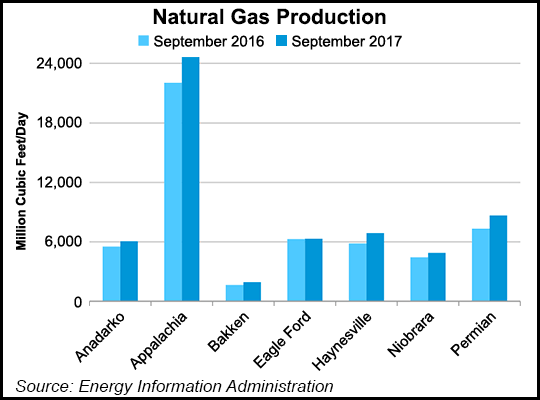 Natural gas production out of the Big Seven plays — the Anadarko, Appalachia, Bakken, Eagle Ford, Haynesville, Niobrara and Permian — is forecast to reach an estimated total of 59.43 Bcf/d in September, up from 58.5 Bcf/d in August, according to EIA’s latest Drilling Productivity Report (DPR), released Monday. Gas production out of the plays, which was on a downward trend throughout 2016, returned to the upside in January and has been on the upswing ever since, according to EIA.

EIA this month for the first time included the Anadarko Basin in the DPR. “In recent years the Anadarko region, which includes 24 Oklahoma and five Texas counties, has become the target of many producers using improved drilling and completion technology to this already well established oil and gas producing basin,” EIA said.

The agency also combined the Marcellus and Utica regions under the combined Appalachia region.

“With the increasing number of wells in Pennsylvania being drilled into the Utica formation and some wells in Ohio producing from the Marcellus shale, the previous regional definitions based on surface boundaries are becoming less meaningful, especially when the two plays overlap,” EIA said. “Furthermore, combining the relatively small number of active rigs across the broader Appalachia region should improve the precision of our productivity estimates.”

On the oil side of the equation, EIA said it expects total production out of the seven plays will be an estimated 6.15 million b/d in September, compared to 6.03 million b/d in August, an increase of 117,000 b/d, according to the DPR.

Drilled but uncompleted (DUC) well counts as of the end of July totaled 7,059 in the seven regions, an increase of 208 from June, EIA said.

The productivity of new oil wells in the play is expected to decline marginally in September to 645 b/d, according to the DPR. New-well gas production per rig is also expected to decrease slightly, to 3.46 MMcf/d.