Natural gas imported from the United States fills most of the chapters in Mexico’s power generation story, but a good part of that book is also devoted to renewable energy. 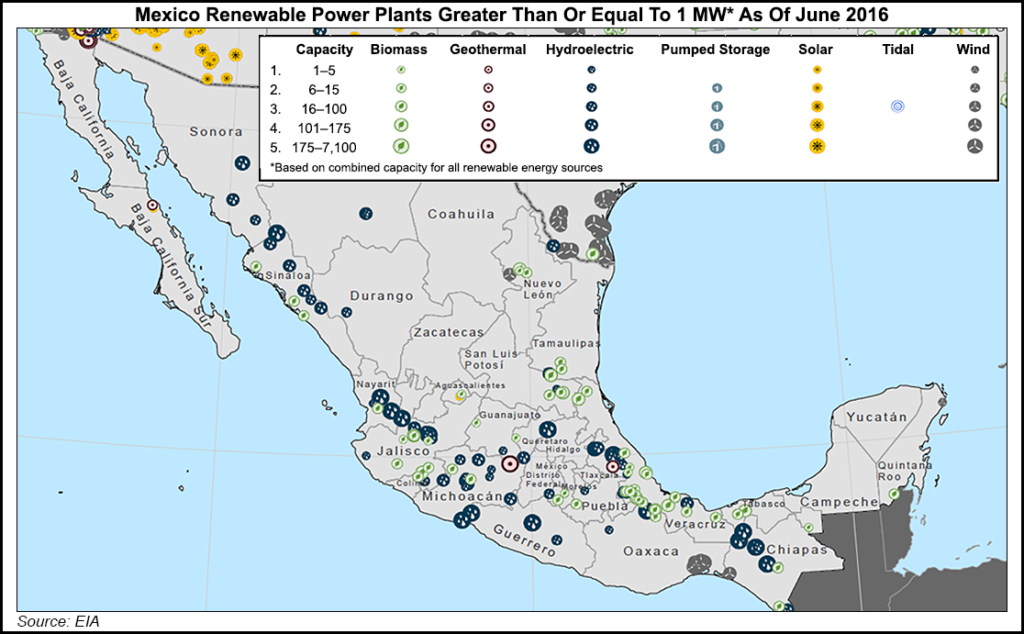 While the ComisiÃ³n Federal de Electricidad (CFE) has bet strongly on increasing its natural gas-fired capacity, Mexico energy reform has also emphasized increasing the use of renewable energy by utilities and large consumers.

Mexico’s demand for power is on the rise, according to Guillermo ZÃºÃ±iga, executive board member of the ComisiÃ³n Reguladora de EnergÃ­a. Peak demand in 2015, excluding the Baja California Peninsula, reached 39.84 GWh, a 2.2% year-on-year increase in 2015 and 12.5% with respect to 2010, he said.

According to the Secretaria de Energia de Mexico (SENER), total installed capacity reached 68 GW in 2015 and is expected to grow to 109 GW by 2030. SENER estimates that 57 GW of additional generation capacity is needed in the next 15 years.

Of this, 38% is expected to come from fossil fuel-burning power stations and the remaining 62% from clean energy projects.

Natural gas-fired, combined-cycle stations are expected to provide 20.5 GW, or 94.5%, of conventional capacity additions. For clean energy, the generation matrix is expected to include diversified additions of wind, solar and efficient cogeneration projects.

Projected investments are in the vicinity of MX$1.7 trillion (approximately US$81 billion at current exchange rates).

The renewables industry made headlines last year because of the perceived success of the first two clean energy auctions, in March and October. In these, CFE met a large share, though not all, of its legally-mandated quota of clean capacity and energy for 2018 and 2019.

Together, the two auctions awarded 4,889 MW of capacity, worth US$6.6 billion in new investment, mostly to solar and wind power generators, at globally competitive prices. Bids package power (MWh) with clean energy certificates (CEC), which offtakers are obligated to purchase to cover their legally-mandated share of clean energy consumption. During the second auction, solar projects averaged $31.9/MWh plus CEC, while wind projects averaged $35.8/MWh plus CEC.

Energy reform mandates that all power off-takers above 1 MWh participating in the wholesale market will have to purchase CECs worth 5% of their consumption in 2018 and 5.8% in 2019.

According to Federico Carranza, head of Iberdrola’s regulation unit, many renewable energy projects awarded in the auctions are behind schedule, and there will not be enough CECs to meet demand in 2018.

“The official goal was for 14 million CECs [to be available in 2018]. Five million CECs were awarded, but only projects to cover 3 million will be finished by then. So what gives? This will inevitably lead to penalties levied on offenders or to court battles,” he said.

ZÃºÃ±iga suggested that the market would raise the CECs’ value, which would eventually lead to more investment, and that off-takers would also be allowed to offset some obligations for a couple of years.

When asked about the power market’s prospects, Casiopea RamÃ­rez, head of regulatory affairs at Gas Natural Fenosa’s Mexico City office and another conference presenter, expressed optimism with a caveat.

“Clear rules will allow qualified suppliers [those participating in the wholesale market] to more adequately evaluate risks in their business model.” However, “as long as production costs are not reflected transparently, it will be very hard for the same-day market to operate.” With the regulatory framework’s present gaps, she said, “uncertainty will limit competition against current tariffs.”

Not all regional markets are created equal. The Monterrey metropolitan area — with its large concentration of large and medium-sized industrial and commercial consumers — is perhaps the most sophisticated in the country. Despite the fact that renewable projects are fast springing up in Nuevo LeÃ³n, Tamaulipas and Coahuila states, the Monterrey market will likely continue to be serviced mainly through combined-cycle power stations, according to speakers at the conference.

When asked about the future of natural gas distribution in the area, RamÃ­rez sounded much more confident. “We are going to change consumption patterns,” she said. “Competition for new contracts will surely attract new suppliers. With more active consumers and the creation of new development poles, there will be a diversification of suppliers. We will have to be creative to survive in this market,” she said.

Fore the foreseeable future, Mexico’s growing demand for natural gas will be largely met by increasing imports of pipeline gas from the United States, where a tariff-minded president just took office.

ZÃºÃ±iga tried to soothe conference attendees about what could come from the new Donald Trump administration in Washington.

“Even if Trump imposes tariffs on trade,” he said, “the price of natural gas will not rise so much as to force a return to fuel oil [for power generation].” Still, he cautioned, “Mexico has access to a great variety of resources to build a diversified energy portfolio to protect itself.”