Following a number of headline-grabbing attacks on oil companies’ climate change policies in 2015, American Petroleum Institute (API) President Jack Gerard’s remarks to kick off 2016 suggest the lobbying group’s rhetoric is evolving to recast the role of fossil fuels — and natural gas in particular — in the climate debate. 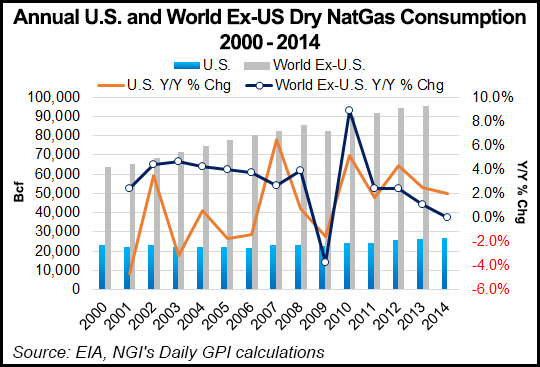 Gerard delivered his annual address during API’s The State of American Energy 2016 luncheon in Washington, DC, Tuesday (see Daily GPI, Jan. 5). While much of Tuesday’s address centered around the economic benefits of U.S. fossil fuel development, an analysis of Gerard’s 2016 speech shows an increased focus on the role of fossil fuels in the context of environmental improvement compared to his prepared remarks from the past two years.

While his 2015 and 2014 speeches both briefly reference industry contributions to achieving carbon emissions reductions, on Tuesday the issue was a major talking point, with Gerard repeatedly using common climate change terminology like “greenhouse gas emissions, CO2” and “carbon” — not to mention frequent use of phrases like “environmental protection” and “environmental improvement” — while outlining API’s platform for the year ahead.

In his 2016 speech, Gerard touted “the U.S. model” of economic growth and carbon emissions reductions made possible through domestic natural gas production.

Gerard took questions from some 80 reporters — including a number of major national news outlets — after the luncheon Tuesday, addressing how the industry is prepared for climate change regulations and what API’s lobbying strategy will be heading into the 2016 elections. He frequently used terms like “science” and “data” when describing the group’s position in the nation’s energy debate.

When asked for his reaction to claims from scientists that fossil fuels would need to be eliminated to truly address climate change, Gerard was quick to point out that the United States leads the world in carbon reductions, in no small part thanks to natural gas development.

“We need to be thoughtful. We need to look at the science and the data. The science today shows us that natural gas is a key opportunity to further improve environment. I would suggest one of the things we should look at is how do we expedite and move LNG [liquefied natural gas] export opportunities in the United States. We have a case study. There are those who try to ignore the case study, some of whom try to deny the case study. The reality is we are leading the world, and how did we get there? That’s the simple point we’re trying to make,” Gerard said, adding that the industry believes it “can deal with the challenge of carbon, but we can also do it in other ways other than those driven purely by political ideology.”

Gerard’s remarks came after a 2015 that saw the Environmental Protection Agency move forward on efforts to regulate carbon emissions from the power sector and methane emissions from the oil and gas industry — both touted as pillars of the Obama administration’s plan to address climate change.

In December, officials from nearly 200 nations met in Paris to strike an agreement aimed at limiting global average temperature increases to less than 2 degrees Celsius above the 20th century average.

Gerard was critical of President Obama and the EPA for attempting to gloss over natural gas as a catalyst for reducing emissions and tackling climate change.

“We believe the president should have gone to Paris and said, ”You know what? I’ve got a case study right here in the United States.’ With one of the world’s largest economies, we’re able to grow our economy, put people to work…and at the same time our carbon emissions are at a 20-year low,” Gerard said. “We believe that story should be told because we think it will help reorient other thinkers about the solutions to the challenges of our time, like climate.”

Gerard was asked Tuesday about the implications of the New York Attorney General’s investigation of ExxonMobil’s climate change disclosures.

Gerard said he wouldn’t comment on investigations of individual companies but said he “would just encourage folks to look at the data, to look at the science. If you have a political dispute over something, it should be a political dispute.” Emphasizing the industry’s investments in low- and zero-carbon emitting technologies, he added that “we really take a second seat to no one in looking for solutions to these challenges.

“And that’s why I emphasize so much the role of natural gas in dealing with the carbon challenge. We have a case study. We can show how you can produce energy, you can create good-paying jobs, and you can protect the environment at the same time. We believe that should be part of the discussion. Move away from ideology. Move away from pure political discourse. Let’s look at the science. Let’s look at the data. We believe that’s the way all investigations should be undertaken.”

Climate change “certainly is” a growing part of the energy debate in the United States, Maisano said, “and frankly it has been part of the discussion [in the industry] for much longer than environmentalists and activists want to acknowledge.”

He criticized the investigation of ExxonMobil as “revisionist history” concerned with what happened decades ago while the industry is focused on innovating to tackle climate change now and moving forward.

“From a communications perspective, it’s clear what the environmentalists and the activists are trying to do, and they’re trying to paint Exxon as somebody who is a denier…This is all about framing the communications debate. And the environmentalists will continue to do it that way and focus on things that are really irrelevant to today’s situation, and what we have today is an environment where natural gas has had a significant impact in reducing the emissions profile of the United States,” Maisano said.

As for all the references to “science” and “data,” Maisano said Gerard is “using words that will strike the ire of people who are attacking the industry, and, I mean, it’s clever use of those words.”

The industry has done more to address climate change through its own innovation than the “more symbolic” efforts of negotiators at the United Nations climate convention in Paris last month, and that’s part of the narrative Gerard and API are promoting, Maisano said.

“Almost all of these trade associations and companies think that [climate change is] a serious challenge that they have to address. If you want to say that it’s real or not, that’s wordsmithing, and environmentalists are stuck on wordsmithing,” Maisano said. He added that “the focus that’s trying to be conveyed by industries across the board” is “that they are actually working towards a solution that is practical and already in motion.”

Announcing API’s Vote 4 Energy campaign Tuesday, Gerard also emphasized that the trade group will be arguing for an all-of-the-above, market-based energy policy heading into the 2016 elections.

“We believe we ought to have a lot more conversation about what natural gas has done as a solution. There are those that want to get in this conversation of, ”Well are you for or are you against this or that?’ or, ”Do you deny this or that?’ Let’s look at the data. Let’s look at the science. Let’s see what’s really happening today…because of free market principles where cleaner-burning fuel is being brought to market,” Gerard said.

He added, “That’s why we take issue with some of the approaches being proposed around the world as to solutions. We believe our solution is based in facts and experience. It’s not an ideology. It’s not based on theoretical foundations. We’ve demonstrated it right here at home, and we believe that’s what’s missing in the conversations.”

For his part, Maisano said debates about energy policy are likely to become more partisan as the presidential election looms.

“The election cycle tends to bring out the worst in our policy debate,” Maisano said. “It doesn’t tend to get as serious as it probably should because we focus on soundbites and who struck John and things like that. And so I’m not confident that we’re going to have a very serious discussion on this. I’m hopeful, but I’m not confident. Part of the way that you try to position the debate is to put it in the context of what’s politically possible and what’s reality now, and that’s really where Gerard has laid down a marker.”