In what looks to be the first of several gains in the NGI Weekly Spot Gas Average, prices nationally posted a hefty advance of 27 cents to $3.63. For the week ended Nov. 7 both physical and futures natural gas markets made preemptive moves higher as weather forecasts called for a return of Polar Vortex bone-rattling cold that was expected to begin its March south by Monday morning. 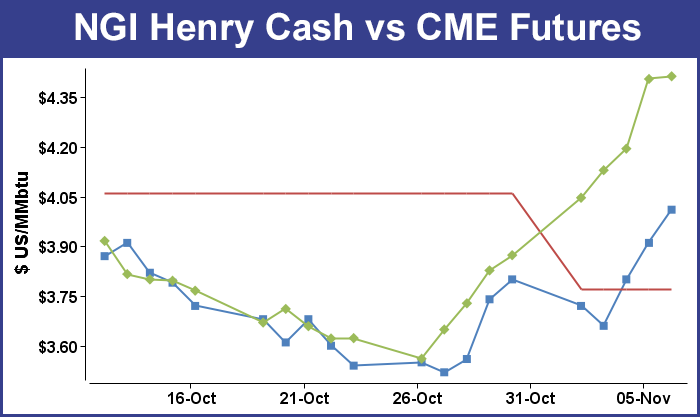 Only 4 of the points followed by NGI experienced losses and the remainder were solidly in the plus column. The week’s greatest gainers were Algonquin Citygates up by $1.62 to average $5.04, followed closely by Tennessee Zone 6 200 L with a $1.44 advance to $4.87. Panhandle Eastern earned the dubious distinction of greatest loser dropping 16 cents to average $3.33 with Northwest Sumas behind at a setback of 6 cents to $3.38.

For the five trading days ended Friday, December futures surged 53.9 cents to $4.412. Friday also marked the ninth consecutive day of gains for the contract, a feat that has only been seen one other time in the last 15 years, according to a Nymex trader.

Thursday’s trading was punctuated by the Energy Information Administration (EIA) reporting an inventory build of 91 Bcf for the week ended Oct. 31, and although it was initially interpreted to be a bearish figure, early futures losses were erased as the market marched higher and focused on near-term weather outlooks. December futures had fallen to a low of $4.111 after the time the number was released and by 10:45 EST December was trading at $4.167, down just 2.7 cents from Wednesday’s settlement.

The number was actually somewhat bearish. “We were hearing anywhere from 85 Bcf to 90 Bcf, but the market bounced back within minutes. Support is now $4 and resistance is at $4.25,” said a New York floor trader.

Pivoting back turned out to be an understatement. By the time trading had finished December had risen a stout 21.0 cents to $4.404 and January was higher by 19.9 cents to $4.486.

Inventories now stand at 3,571 Bcf and are 238 Bcf less than last year and 261 Bcf below the 5-year average. In the East Region 43 Bcf were injected and the West Region saw inventories increase by 8 Bcf. Stocks in the Producing Region rose by 40 Bcf.

A futures trader Wednesday said, “it looks like up, up, and away and it’s all about the weather. It’s amazing how many 15-day forecasts come out, but I don’t think we are done to the upside,” said the New York floor trader. “I think we have a chance to test $4.35 to $4.38 and then pull back from there. Traders are waiting to see if sustained cold is going to come in the next 15 to 25 days, and I would not be short here. I would look to sell at $4.35 to $4.40.”

Friday’s futures gains were modest. December added just 0.8 cent to $4.412 enough for a ninth straight advance. With Friday’s nominal gains and even as bullish as the weather outlook appears, analysts suggest not chasing the market higher. “Until the forecasts begin to shift in the direction of normal or mild patterns, some fresh price highs to around the $4.55 area would appear likely with a brief punch to above $4.60 possible by Monday if weekend weather updates stretch cold ideas into the final week of this month,” said Jim Ritterbusch of Ritterbusch and Associates in closing comments Thursday to clients.

“However, we are cautioning against following this rally as we still see an exceptionally strong production pace and an import lift that could accompany an increase in Canadian gas stocks of almost 1% last week. Meanwhile, this shot of cold air continues to pass through to a strengthening within the 2015 portion of the curve, and we would continue to suggest holding bull spreads such as long January 2015-short July 2015 for now.”

Supply-wise, Ritterbusch said, “although another supply build could be forthcoming in next week’s EIA release that could push supply to our previously estimated peak of 3.6 Tcf, the market appears much more focused on the upcoming cold spell that will almost certainly be forcing some sizable withdrawals within the EIA releases beyond next Thursday. Updates to the one- to two-week temperature views are looking even more bullish than yesterday with much below normal trends are still anticipated over a broad swath (roughly the eastern two-thirds) of the nation.”

In Friday’s trading physical prices for weekend and Monday delivery worked lower from Thursday’s meteoric 24-cent rise. Although traders are bracing for super-sized cold by the middle of next week, near-term outlooks at major population centers were expected to be normal by Monday.

Hefty gains at Gulf Coast points couldn’t offset losses in the Northeast, Mid-Atlantic, and Appalachia. Futures bulls were popping champagne as the spot December contract made it nine straight advances in a row. At the close, December was up 0.8 cent to $4.412 after trading as high as $4.494, and January also landed in the plus column, posting a gain of 2.1 cents to $4.507.

Traders were kept busy analyzing both near-term and medium-term weather forecasts. Longer term, for November, by all accounts is expected to see a return of the polar vortex and bone-chilling cold. In its Friday morning 20-day forecast, WeatherBELL Analytics saw a brutal November with little chance of any measurable reprieve. “Its on! The fight for the coldest November in 50 years from the Plains eastward,” said meteorologist Joe Bastardi.

By Monday, however, temperatures in major eastern population centers are expected near seasonal norms. Wunderground.com forecast that Boston’s Friday high of 49 would reach 55 by Monday, just a degree above its seasonal norm. New York City’s 52 high on Friday was seen making it to 55 on Monday, slightly lower than the 57 degree early November norm.

In the Marcellus and Appalachia, gas on Millennium fell 24 cents to $3.11, and packages delivered to Transco Leidy retreated a stout 63 cents to $2.78. At Tennessee Zone 4, Marcellus gas for weekend and Monday delivery fell 39 cents to $2.74, and on Dominion South gas was quoted 26 cents lower at $3.22.

A Houston-based long-haul pipeline veteran surveying the forthcoming onslaught of cold temperatures said, “We’ve got a few little things to deal with, but other than that we are ready. There is lots of gas and only so much we can deliver, but we’re ready.

“It’s going to be interesting to see what happens. Basis is certainly strengthening in the Northeast. December Algonquin is $13.67, and for the rest of the winter it is $13.93. You are looking at $18.38 for delivered gas for 31 days [Algonquin]. That’s where the market is and that’s not swing gas yet.”

Natgasweather.com said, “We still need to get through the two current less than impressive weather systems moving across the northern U.S. this weekend before the much colder Arctic blast sweeps through the north-central U.S. early next week. While it will be somewhat chilly [Friday] and [Saturday] over the Great Lakes and New England with rain or snow showers, temperatures will mainly only be 5-10 F colder than normal. The more intimidating Arctic blast is set to arrive over the northern Plains Monday morning with temperatures dropping well below freezing.”

Once that blast arrives Bastardi said he sees “snow throwing its two cents in. Buy the ECMWF temperatures and ideas through 15 days, but be skeptical about any warming in its Weeklies thereafter. [The] battle will move to whether this can pull back for a while, or keep pounding away. Analog package split on this.

“I have chosen the coldest temperature option I can find, [and] confidence has been high all week and it’s just as high now. This is a brutal attack and it’s not going to go quietly.”