Following a slow start in April, the 2014 natural gas injection season grew stronger in May and June, with net injections of 100 Bcf or greater for eight straight weeks, but working stocks at the end of October will reach only an estimated 3.43 Tcf, 380 Bcf lower than at the same time last year, according to the Energy Information Administration (EIA). 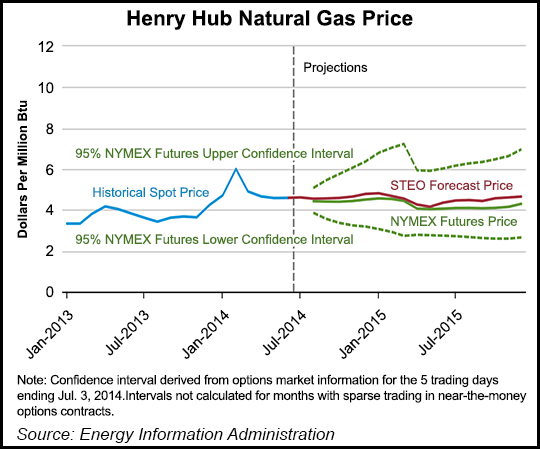 “More than 1 Tcf of natural gas has been added to storage since mid-April, marking the quickest 1 Tcf increase in inventories since 2003,” said EIA Administrator Adam Sieminski.

Natural gas spot prices at the Henry Hub averaged $4.59/MMBtu in June, up a penny compared with May (see Shale Daily, June 10), and EIA expects spot prices will remain near current levels until the start of the winter heating season. The agency is projecting that Henry Hub natural gas prices will average $4.77/MMBtu this year (a 3-cent increase from the previous STEO) and $4.50/MMBtu in 2015 (a 1-cent increase).

Gas futures prices for October 2014 delivery (for the five-day period ending July 2) averaged $4.40/MMBtu. Current options and futures prices imply that market participants place the lower and upper bounds for the 95% confidence interval for October 2014 contracts at $3.37/MMBtu and $5.76/MMBtu, respectively. At this time one year ago, the gas futures contract for October 2013 averaged $3.62/MMBtu and the corresponding lower and upper limits of the 95% confidence interval were $2.69/MMBtu and $4.88/MMBtu, EIA said.

The agency expects total natural gas consumption will average 72.4 Bcf/d in 2014, an increase of 1.4% from 2013, led by the industrial sector. Total gas consumption is expected to fall by 0.3 Bcf/d next year as a return to near-normal winter weather contributes to lower residential and commercial consumption.

Higher natural gas prices this year will contribute to an estimated 1.1% decline in consumption in the power sector to 22.1 Bcf/d, with lower gas prices and the retirement of some coal plants prompting an increase to 22.8 Bcf/d expected next year.

Total U.S. natural gas marketed production will grow by an average rate of 4.1% this year and 1.2% in 2015. “Rapid natural gas production growth in the Marcellus formation has contributed to low natural gas forward prices in the Northeast, and as a result new infrastructure has been proposed to take gas to other market regions,” EIA said.

Growing domestic production is expected to continue to put downward pressure on natural gas imports from Canada, according to EIA, which projects net imports of 3.7 Bcf/d this year and 3.1 Bcf/d next year, which would be the lowest level since 1987.

Based on the National Oceanic and Atmospheric Administration’s forecast of a relatively mild 2014 Atlantic hurricane season (see Daily GPI, May 22), EIA has estimated that 30 Bcf of natural gas production in the Gulf of Mexico will be shut in at some point.