Over the last two decades, the natural gas market has seen prices rise and fall, volatility wax and wane; while supply has ballooned and some liquidity has been lost to the departure of large bank trading shops. Price indexes are still very much a part of the game, but these days they are suffering a bit — in part from their own success. 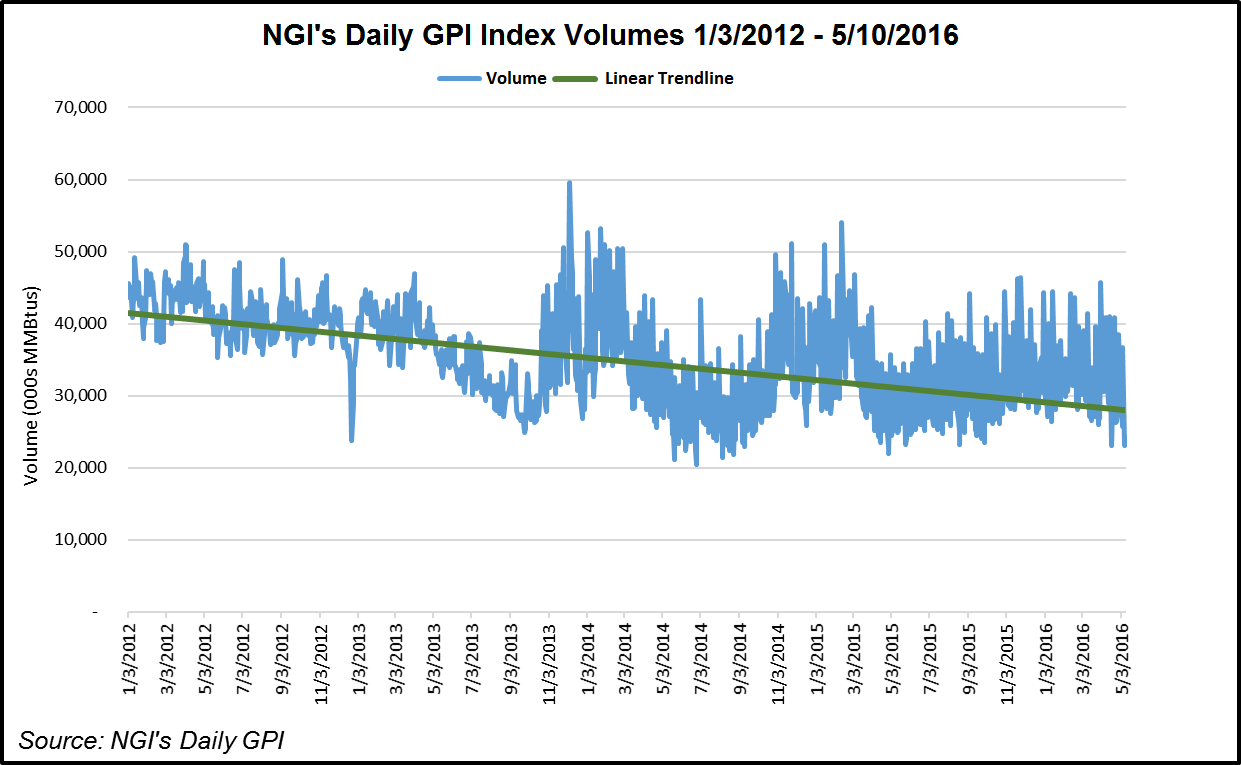 In recent years, fixed-price deals have declined in popularity among market participants while reliance on index prices has grown. There’s no shortage of companies using the indexes, but fewer fixed-price deals means fewer data points upon which to build an index.

Market changes, lower prices and real or perceived regulatory risk have shrunk the roster of companies that voluntarily report prices to index publishers. So said speakers on a price reporting panel at the EnergyRisk Summit 2016 USA in Houston Tuesday.

The current downward trend in voluntary price reporting and fixed-price dealmaking began in 2008 as the rest of the world economy slowed. However lately, reporting has shown signs of stabilizing and even a slight gain, according to NGI‘s Dexter Steis, executive publisher.

Steis said the amount of price data that NGI received in 2013 was down 14% from the level of 2012. However, the decline from 2013 to 2014 was 13%. Those years were marked by a loss of market speculators and banks from natural gas trading. The decline seen in 2015 from the year before was only 2%. Year-to-date, data collection by NGI is actually up by about 2%. “So the trend has been down and the trend may be leveling off, but one year’s worth of data maybe doesn’t define that.”

If the trend of declining index participation were to continue, the industry could face a future of dried-up indexes and potentially government-mandated reporting of trade data that would go beyond merely that of price, volume, location and flow, Steis warned. “…[I]f it was mandatory, my suspicion is it wouldn’t be just those four pieces of data; it would be counterparty, time of trade, swap, index, financial,” Steis said. “You name it. It’s a slippery slope.”

On the other hand, voluntary price reporting to index publishers may help a trading company from sliding down the slope to noncompliance with government regulations.

“If you’re going to voluntarily report, you have to report accurately and in totality. That’s the essence of your obligation,” said co-panelist Mark Perlis, of counsel with Covington & Burling LLP. “That means you have to have very good records and you have a very good internal reporting system so that from your trade records you can distill the reports that go to the trade publications, just like you have to have good trade records in order to make the FERC-required reporting every month [for electric utilities]…”

Companies that favor voluntary reporting have done so, in part, because it connotes a robust trade records systems and reinforces its maintenance, Perlis said. Those same systems serve multiple internal management functions in addition to the price reporting effort, he said.

Co-panelist Paul Hughes, Southern Company manager of risk control, said units of Southern report power and natural gas trades. For natural gas, however, Southern traders rely mostly on price indexes. “Just about every transaction we do is going to be reviewed at some point for prudency by one of the public service commissions,” he said. “…We are always going to lean toward the index. It’s much easier to explain…easier to talk with regulators about that.”

Steis said through trade associations, NGI has attempted to encourage utility companies and others to engage in more fixed-price trading. However, these entities rely on the indexes because they work. “The problem is there’s this tail wagging the dog, and FERC understands that,” he said. “The latest [Commission] 552 data suggests that 16% of fixed-price transactions are wagging 80-some-odd percent of the dog, which are based on index. That’s a concern.

“That’s on the utility side, and the end-users are even worse; they all index. They’re the customers of this market so we can’t blame them.”

While the gas market has been transformed by the abundance of supply available from shale plays, the new producers plying those plays have no interest in entering the trading arena and therefore making their own contribution to index formation, according to Steis. The older, large integrated companies are the ones with trading desks that report to the indexes.

“…[I]ndependent producers…are taking up a greater mix of the production in this country,” he said. “These are companies whose names we didn’t know eight years ago…[N]ow those companies are producing a lot of natural gas as a percentage, and they are way more interested in proving up their reserves than they are setting up a trading shop and negotiating fixed-price transactions.”

As shale gas abundance and the locations of shale plays on the pipeline network have reshaped the market, there is an increasing amount of data about industry fundamentals available to market participants, said Natural Gas Supply Association’s (NGSA) Jenny Fordham, senior vice president for government affairs. NGSA supports voluntary reporting to index publishers, she said, but gas price discovery doesn’t begin and end with an index.

“It’s hard to say why the market would rely more heavily on index or not, but I think it speaks about the level of confidence in the market with the indices,” she said. “The market participants have a lot more information available to them today about the underlying fundamentals…We’ve been a longtime supporter of the voluntary price reporting approach that we have today, and that’s because we don’t want to see government dictating what could ultimately drive transaction decisions away from indexes or fixed-price transactions.”

Steis pointed out that each of the indexes that NGI publishes, daily and for bidweek, carries with it the number of trades and the volume of gas that went into the calculation. “Those who use the indexes can see exactly what the liquidity is at each point. Over the years, we have encouraged companies to index to the more liquid points or to regional averages, which we also calculate.”

NGIalso maintains the confidentiality of trade information submitted to it by participating companies. It requires a subpoena (which on occasionNGI has contested) in an ongoing case for a government agency or court to request specific records related to the case. The FERC’s Policy Statement of 2003 also includes a safe harbor for unintentional errors in reporting.