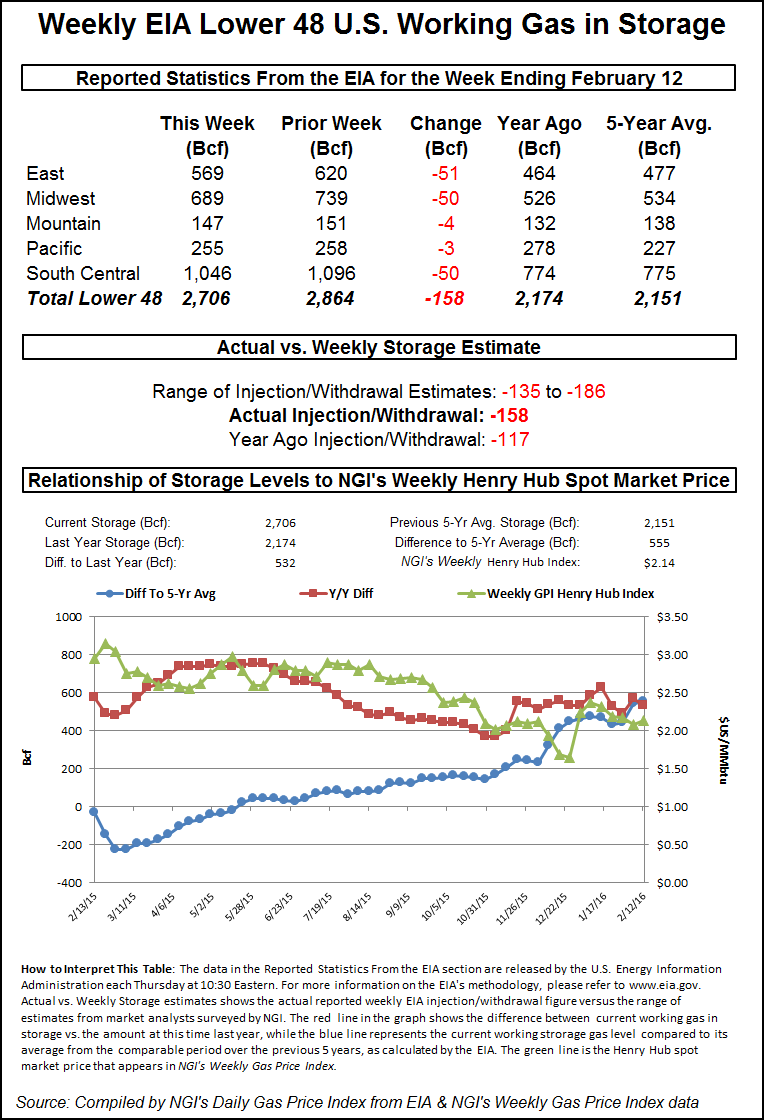 The NGI National Spot Gas Average tumbled 8 cents to $1.77, and quotes in the East averaged about 25 cents lower. Futures opened about a nickel lower, lifted somewhat on the Energy Information Administration (EIA) storage report. But futures then ground lower, with the March contract settling at $1.852, down 9.0 cents, and April dropping 8.4 cents to $1.927. March crude oil rose 11 cents to $30.77/bbl.

The EIA reported a withdrawal of 158 Bcf in its inventory report for Feb. 12, about 4 Bcf greater than what the market was expecting. March futures rose to an intraday high of $1.911 in the minutes following the release of the storage data, but that was still down 3.2 cents from Wednesday’s settlement.

“You would think off of this it would be bullish, but we are trading right in mid-range on the day,” said a New York floor trader. “We were trading at $1.880 before the number came out, and we are at $1.910 now. The market didn’t touch the day’s highs or lows.”

Analysts saw the number as mildly supportive. “The 158 Bcf net withdrawal for last week was somewhat more than expected and may support market sentiment on that basis,” said Tim Evans of Citi Futures Perspective. “At the same time, however, we note the draw was still less than the 170 Bcf five-year average and so still somewhat bearish on a seasonally adjusted basis. With forecasts for mild temperatures ahead, we’d also suspect that any upward price reaction off the storage report may prove short-lived as the overall bearish trend of below-average storage withdrawals is likely to continue.”

Inventories are still a hefty 532 Bcf greater than last year and 555 Bcf more than the five-year average. In the East Region 51 Bcf was pulled, and the Midwest Region saw inventories fall by 50 Bcf. Stocks in the Mountain Region were down by 4 Bcf, and the Pacific Region was lower by 3 Bcf. The South Central Region shed 50 Bcf.

Natgasweather.com in its noon Thursday model analyses noted little change with expected warmth in the near term. “The data is little changed through the weekend with nice warming across the country apart from a weather system through the West. This run is a little less cold with the system mid next week but is quite a bit colder with the reinforcing shot at the end of the week into the following weekend. A much colder run in the days 10-15 period by a lot. Certainly a cold outlier for now, but needs watching. A drop of -21 in our winter threat index in days 10-15, which is quite huge.

Evans said Wednesday’s slightly cooler temperature forecasts “translated into slightly larger storage withdrawals in the weeks ahead. Although slightly less bearish than a day ago, with storage as forecast the year-on-five-year average storage surplus still trends higher from 543 Bcf on Feb. 5 to 668 Bcf as of March 4.

Evans commented that “In general, a rising storage surplus confirms that the market is becoming more oversupplied on a seasonally adjusted basis, with a corresponding downward fundamental pressure on prices. Prices may still be able to turn higher or avoid new lows, but the rising surplus still reduces the market’s upside potential and leaves the downside open. Combined with the approaching end of the heating season, we see this rising surplus dictating a retest of the $1.684 spot low from December, with even lower levels a possibility.”

Evans recommends entering the market from the short side via April futures using a $2.15 limit order with a protective buy stop at $2.35 to limit the initial risk on the trade.

A one-two punch of moderating temperatures and soft power pricing kept spot prices on the defensive. AccuWeather.com forecast that Thursday’s high of 39 degrees in Chicago would rise to 55 Friday before relaxing to 53 Saturday. The normal high in Chicago this time of year is 37. New York City was expected to see its Thursday high of 36 reach 39 Friday before jumping to 56 Saturday, 14 degrees above normal.

To the south, the declines were not quite as onerous. Friday gas on Texas Eastern M-3, Delivery was quoted 40 cents lower at $1.41, and gas bound for New York City on Transco Zone 6 fell 15 cents to $1.97.