The fall shoulder season may be just around the corner, but some unexpected maintenance events that cut both nuclear generation and production this week helped send natural gas October futures and forward prices up more than 10 cents on average from Sept. 9 to 15, NGI Forward Look shows. 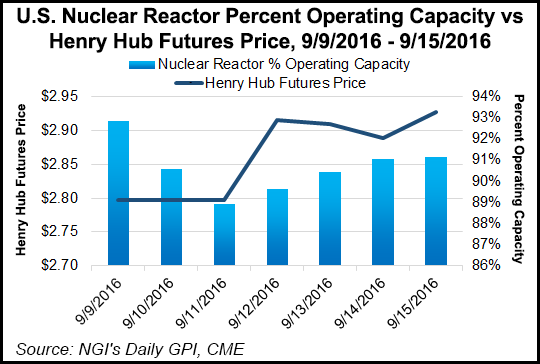 The strength would have been even more pronounced had it not been for continued weakness in the Northeast, which put up the only losses in the country.

But while this week’s overall gains are fairly substantial, they aren’t likely to be sustained as they are largely attributed to temporary factors. For one, nuclear generation output has been lower than normal after the Davis-Besse reactor in Ohio unexpectedly shut Sept. 10.

The 894 MW unit shut after an automatic reactor trip occurred due to a main generator lock-out, according to the Nuclear Regulatory Commission. The cause of the generator lock-out is being investigated at this time, and there was no estimate for when the reactor would return to full service.

As of Friday, some 8,742 MW of nuclear capacity was offline for maintenance or refueling, with about 6% of that going offline in the past four weeks, according to NGI’s NRC Power Reactor Status Report.

Meanwhile, production was also down this week, hovering just above 70 Bcf/d on Friday. Over the past week, output has fallen by more than 2 Bcf/d, and the impact has been felt in numerous supply basins, according to analysts at Mobius Risk Group.

Appalachia, the Rockies and Gulf of Mexico production have all seen maintenance-related losses of 0.5 Bcf/d or more in recent days, the company said. The cuts to supply help lift cash prices at Henry Hub above $3 for the first time in more than a year, NGI Markets Analyst Nate Harrison said.

Indeed, it was a busy week on the production front. In the Northeast, Empire receipts from Shell’s NFGSC — Empire Conn gathering meter in Tioga County, PA, dropped to zero Wednesday, compared to the prior 30-day average of 120 MMcf/d, data and analytics company Genscape said.

Also in the Northeast, Tennessee receipts from the UDP Liberty Dehy meter have been reduced during the past few days. Thursday’s nominations were 297 MMcf/d, about 190 MMcf/d below the prior 30-day average, according to Genscape.

Meanwhile, Rockies production has been hampered by lower receipts in the Piceance and Denver Julesburg (DJ) basins. Colorado Interstate Gas receipts from the Roan Cliffs gathering system in western Colorado have been running at just 6 MMcf/d the past two days, about 65 MMcf/d below the 30-day average, Genscape said.

In the DJ, CIG receipts from DCP Midstream’s Mewbourn plant have also been running low the last couple of days at 107 MMcf/d, versus the prior 30-day average of 217 MMcf/d. In addition, volumes from Anadarko’s Lancaster plant were down 73 MMcf/d day-over-day as of Thursday, Genscape said. While it appears the region is offsetting some of the declines with increased receipts from the Kerr/Narco Platte Valley plant (up 50 MMcf/d), overall receipts in the Weld County/DJ area are running 131 MMcf/d below normal at present, the company said.

And in Texas’ Permian basin, El Paso receipts at Triple Crown — a Markwest gathering point — just east of Cornudas, have virtually shut off after having averaged 158 MMcf/d in the prior 30 days. It is unclear what the exact cause is, but “El Paso has a variety of maintenance events under way or beginning in the area that are noted to affect capacity through Cornudas, although none of the restrictions appear to be great enough to be the sole cause of a production drop this large at an individual meter,” Genscape said.

And on Thursday, NGPL declared two separate force majeure events. The first will require the shut in of the Kelton/NGPL Wheeler point in Wheeler County, TX, which typically supplies 8.5 MMcf/d. The event is effective from Friday’s gas day until further notice.

The second event is more significant and will require the interconnect with Enable Gas Transmission in Hot Spring County, AR, to shut in from Sept. 20 through Oct. 9. This point typically supplies about 80 MMcf/d, which flows onto NGPL’s Gulf Coast Mainline. Enable will likely reroute the affected gas to the nearby Mississippi River Transmission connection in Lincoln County, AR, Genscape said.

But cash’s move above $3 proved to be short-lived, and Henry Hub was trading around $2.94 on Friday.

Forwards appeared to also have stalled, with trading mostly flat around midday.

NGI’s Patrick Rau, director of strategy and research, said that while this week has seen some temporary bumps in the road for production, the industry can’t ignore the bigger picture. With E&P companies outlining plans to add rigs later this year and in 2017, gas production is more than likely going to increase faster than expected, Rau said.

Already, Appalachian production has returned to its February peak levels, and that is obviously not great for the price outlook, although weather remains a wild card, he said. While most winter outlooks will begin coming out in the next couple of weeks, early indications point to a slow start to the season, but more aggressive cooling by year’s end.

Forecasters at Bespoke Weather Services said recent climate models decreased the warm risk for October, showing early-month trough risk across the East that would potentially keep temperatures closer to average. “However, the pattern should be relatively progressive, and overall, we still would favor temperatures being slightly above-average across most heating demand regions in the East,” Bespoke said.

Meanwhile, cooler weather in the South could be counterproductive early on by reducing cooling demand as well.

Forecasts in November remained similar, with ridging looking most likely across the center of the country and the risk for some cooler weather across the East, Bespoke said. “In what was one of the largest surprises, most models showed warmer risk across the East into December, as the true transition to cold weather in the winter may come a bit later than expected,” Bespoke said.

“This remains relatively low confidence due to conflicting ENSO and other forecasts, and accordingly, we see a wide range of possibilities from significant warmth to decent cold in the month of January as well,” the forecaster said. Confidence is increasing that the winter ends cold, though just how cold depends significantly on future ENSO development, it added.

Meteorologists at Weather Trends International also said colder weather was likely on the back end of the winter season, but they called for the drop in temperatures to occur as early as December. WTI expects one of the largest year-on-year winter temperature declines to occur in the fourth quarter 2016, with a very cold winter lapping the warmest winter on record. December is expected to be very cold and dry, with snow in northern markets.

To be sure, the coming winter will be a major indicator of how prices shape up for the balance of the year and in 2017. “It will be interesting to see how many producers have been locking in the $3+ strip for 2017,” Rau said. “The more producers lock in now, the more they should be willing to drill and produce next year, especially since there probably will not be a commensurate increase in oil service costs in 2017.”